Eagles Flyers Phillies Sixers About Us Write For Us
Postgame Perspective: 2nd-period struggles continue for Flyers
Between the Pipes:12/30/14-Flyers fall in the desert; look to rebound against Colorado 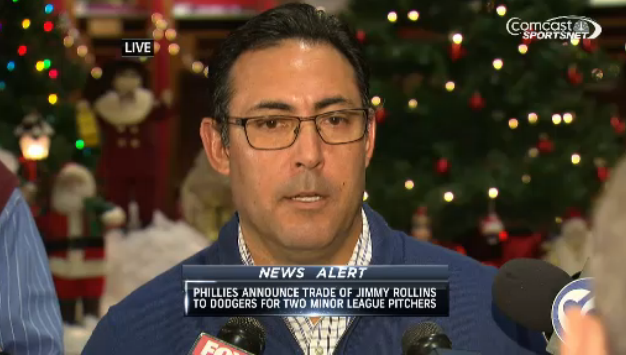 Peter Gammons, long-time Red Sox writer for the Boston Globe, followed by a stint at ESPN and now MLB Network is still regarded as one of the top Red Sox insiders in the industry.  As it has been well-documented, the Phillies and Red Sox have talked trade for a while now, centered around Phillies ace Cole Hamels.   A recent Gammons column on Gammons Daily suggests that Amaro is ignoring the advice of assistant to the General Manager Charlie Manuel.

In Peter Gammons' column, he says that the Phillies would be prudent to follow Manuel's advice regarding Red Sox prospect Garin Cecchini:

Now, Charlie Manuel saw more games in the Boston system than any other team and believes Garin Cecchini is a rising star and loves several others, but while Manuel is one of the best evaluators—particularly of hitters—in the game, his voice is not heard by Amaro.

Is this necessarily a reflection that something is awry?  Probably not.

At the end of the day, the Boston Red Sox desperately need an ace.  Trades this offseason  have netted the Red Sox a collection of third and fourth starters.   At the end of the day, this would not cut it.  The Red Sox are in dire need of an ace.  They have spent a ton of money to bring in free agents Pablo Sandoval and Hanley Ramirez; why would they call it an offseason with a mediocre rotation?

The reason Amaro is wise to wait is that the Red Sox situation could turn more desperate, particularly when not-an-ace-but-almost starter James Shields signs.  If Shields signs with the Giants, then the Red Sox will face more pressure, as the options will be limited to Max Scherzer (who is seeking a reported $200 million) and Hamels.  Comparing the two, Hamels is the more attractive option, contract-wise.  If the Red Sox are that concerned about the future, signing Scherzer for way too long will not help.

So, Amaro is prudent to wait.  Phillies fans probably will not be satisfied with the deal without Betts or Swihart.  Perhaps Cecchini is indeed on the Phillies' radar as the primary piece in the trade, but rather as a secondary piece for the player that they want.   There is still plenty of time before February 19 when pitchers and catchers report for the Phillies to make a deal.  Amaro must get this deal right, and therefore should wait until it is right.

For once, I do side with Amaro. I don't know that I would trust Charlie's evaluation too much of a hitter. I know people will argue because of the successes of past Indian's teams and then the 5 year window of the Phillie's success, but Charlie's players just flat out out slugged teams. Does he REALLY have an eye and understanding of the talent. Once the slugging numbers went down, he didn't do so well teaching the guys to be true hitters (not sluggers.) Just a thought....