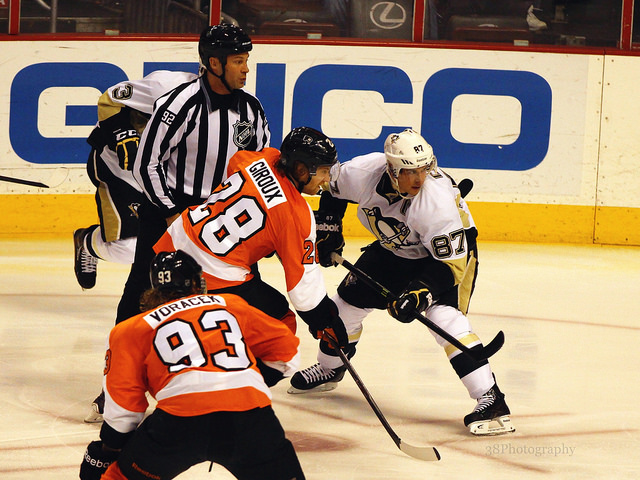 With the exception of Saturday's win in Buffalo – an ugly one at that – the Flyers last four games have been as sloppy as they come. After a dominant win over Tampa Bay, the Flyers have sluggishly played their way to losses in three of four games.

But Tuesday, all bets are off as the Flyers play host to the Pittsburgh Penguins. One thing is for sure, when these two teams get together, the result can be unpredictable. The opening face-off is set for 7:30 p.m.

The Flyers are fresh off an embarrassing 7-4 loss to the Islanders on Monday afternoon. Despite the struggles, Jake Voracek continues to pace the NHL in points, leading with 55. He has three assists in the last two games. Claude Giroux is tied for fourth in points with 50.

Defensemen Mark Streit and Michael Del Zotto have been hot of late. Del Zotto has a goal and two assists in the last two games. Streit has scored in back-to-back games.

The Flyers are dealing with a patchwork defense. Four regular players are out of the lineup, as Brandon Manning and Oliver Lauridsen will fill in for Nick Schultz and Carlo Colaiacovo.

Ray Emery gets the start in net for the Flyers. Emery was pulled in his last start against Vancouver last Thursday, and entered in relief of Rob Zepp on Monday. Emery is 7-9-1 with a 3.37 GAA and .886 save percentage.

The Penguins are one of the East's best teams at 26-12-6, but have lost two straight games and are 4-5-1 in their last 10 games entering Tuesday's match.

Captain Sidney Crosby leads the team with 51 points, third in the NHL. He is also on a four-game point streak, with four goals and four assists in that time.

Evgeni Malkin is tied with Giroux with 50 points and has a team-leading 19 goals. Chris Kunitz also comes into the game with 13 goals.

The Penguins are dealing with their own injury struggles. Defenseman Olli Maatta is lost for the season and forwards Pascal Dupuis, Patrik Hornqvist and Blake Comeau are all on injured reserve.

On the blue line, the Penguins have Christian Ehrhoff and Simon Despres.

In goal, the Penguins go with backup Thomas Greiss. Greiss is appearing in his 10th game of the season, posting a 4-2-2 record with a 2.53 GAA and .919 save percentage.