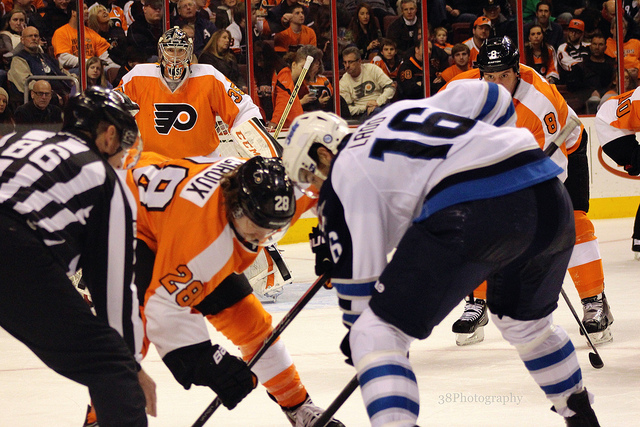 The Flyers season has been a roller-coaster ride of what could have been and what will probably never be. The Orange and Black have had stretches of great potential, where they play inspired hockey and then go cold and show listlessness.

The last time the Flyers faced the Winnipeg Jets, it was one of their statement games. Trailing 3-1 in the third, the Flyers rallied around rookie goalie Rob Zepp to force overtime and win, 4-3, in what was the second of three straight wins to start a crucial road trip.

It is over a month since that game, and the Flyers are now on home ice looking to extend their winning streak to three games on Thursday night as they host the Jets. The opening face-off is set for 7 p.m.

The Flyers are coming off a strong 4-3 shootout win over the Coyotes, rallying from a 2-0 deficit early in the first.

Wayne Simmonds snapped an eight-game goalless drought in the game with his 17th goal of the season, which is tied for the team lead.

Jake Voracek and Claude Giroux each recorded assists in the win, increasing their point totals. Voracek still leads the league with 57 points and 40 assists. Giroux is in fourth in the league with 52 points.

The Flyers already have six players with at least 10 goals – Simmonds, Voracek, Giroux, Michael Raffl, Brayden Schenn and Sean Couturier – and are closing in on adding a few names to that list. R.J. Umberger has nine goals on the season while Mark Streit and Vincent Lecavalier each have seven.

The Flyers will also go with the same defensive set-up as they had against Arizona on Tuesday. Nick Grossmann is close to returning, but not quite ready after practice on Wednesday, meaning Carlo Colaiacovo remains in the lineup.

Steve Mason made an impromptu return to the lineup on Tuesday, entering in relief for Ray Emery and making 22 saves in a win. He will start on Thursday. Mason is 9-12-6 with a 2.41 GAA and .921 save percentage.

The Jets come in off a 5-3 loss to the Penguins on Tuesday that snapped a five-game winning streak and seven-game point streak.

Mathieu Perreault and Michael Frolik are also among the Jets top scorers. Perreault has 29 points and Frolik has 25 points.

Defensively, the Jets lean on Dustin Byfuglien. Byfuglien leads all defensemen on the team with 32 points. Ben Chiarot is a rising rookie defenseman for the Jets as well, and has played well alongside Byfuglien all season. Zach Bogosian and Jacob Trouba also are strong parts of the Jets blue line.

In goal, the Jets will start 24-year-old Michael Hutchinson. Hutchinson has split goaltending duties with Ondrej Pavelec this season. He is 14-4-2 with a 1.90 GAA and .935 save percentage. Both Hutchinson's GAA and save percentage ranks second in the NHL.