Eagles Flyers Phillies Sixers About Us Write For Us
Previous month:
December 2014
Next month:
February 2015

While the Flyers find themselves in the midst of a three-game winning streak, the Flyers of Tomorrow continue to hold their own. While it's been a bit of a slow week for the Flyers' prospects, there are still some interesting takeaways. 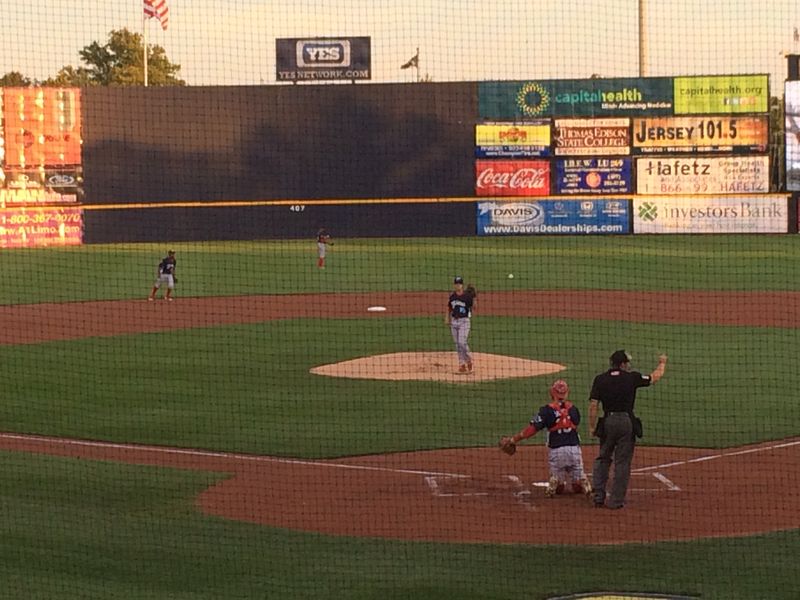 The Phillies have acquired several young players this offseason in their quest toward getting younger.    As the dust settles, new prospect rankings are coming forth.   Keith Law of ESPN posted his lists this week.   Despite the acquisitions, the Phillies have just two out of the top 100 prospects.

The two prospects who made the cut: 2013 first round draft pick J.P. Crawford and 2014 first round draft pick Aaron Nola.   Law thinks very highly of Crawford, ranking him seventh in all of baseball.  Nola is a bit further down at number 57.  Law thinks very highly of Crawford in particular, believing that Crawford will work out any deficiencies that he has at the moment.

Two Phillies players missing from the list: Maikel Franco and Jesse Biddle.  Franco is still high on Law's Phillies top 10, but he was pushed out by others in the top 100 rankings.  Biddle seems to be completely off of the prospect radar, as evidenced by Law's top 10 Phillies prospects.

The rest of Law's top 10 fills out as follows:

The Phillies are short on position players, but are well-stocked with pitchers.  Pitcher Ben Lively, acquired for Marlon Byrd from the Cincinnati Reds, is not on this list.  However, with Eflin and Windle both top 10 players, the Phillies appear to have done quite well in their deal for Jimmy Rollins.

Pat Gillick's tenure should be short; the Phillies changes are just beginning

The Phillies made a major move this week when they announced that long-time president David Montgomery would not return to the position.   The man tagged with the task is Pat Gillick, who served as interim president while Montgomery was on a health leave.  While the move seems to bring some closure, there is more uncertainty in the Phillies organization than ever.

Gillick indicated to MLB.com's Todd Zolecki that his tenure with the club will likely be short:

To be frank, I’m not really focusing on how long I’m going to be here. I’m kind of focused on getting us back to where we were three or four years ago.

Just a week earlier Gillick said he did not see himself in that role a year from now.  And he still might not be.

The Phillies are going to need another president in another year or so.   When they do, they probably will follow suit with what a lot of organizations are doing: hire a president of baseball operations.   These executives are glorified general managers, in many cases.   Theo Epstein went from the Boston Red Sox to the Chicago Cubs in such a role, as former Tampa Bay Rays general manager Andrew Friedman moved to the Dodgers.  The Phillies could look to a current successful general manager for this role.

There are plenty out there that are young and could be poised for a promotion. John Mozeliak of the St. Louis Cardinals might be someone that would make a good president of baseball operations. Mozeliak is just 46 years old and highly regarded as a baseball executive.  Jon Daniels of the Texas Rangers and Walt Jocketty of the Cincinnati Reds.  However, as we saw with the Toronto Blue Jays' negotiations with Baltimore Orioles and their current general manager Dan Duquette, it may not be easy.

That brings us to another situation: Ruben Amaro, Jr.   Amaro has gotten a great deal of grief from Phillies fans.    In a radio interview on Sportsradio WIP with Michael Barkann and Ike Reese, Salisbury said that Montgomery took responsibility for some of the Phillies contracts that crippled the team in recent days.   If that is the case, Amaro deserves another chance to show that he has a place in the organization.

Amaro, however, has just one year remaining on his contract and sits as a lame duck.   Amaro is not likely to be considered to be club president, but could earn an extension as general manager.  In the current baseball climate, and likely on the Phillies right now, the general manager has less power than the president of baseball operations.   If Amaro demonstrates himself to be useful to Gillick over the next year, he could earn an opportunity to be general manager.

However, a new club president could bring in someone who he personally is comfortable with for the position.   That is more likely.  But a lot of important baseball decisions have to be made between now and next season.  Gillick will have the final say on those matters.  Salisbury believes that Gillick overruled Amaro on Yasmany Tomas, or else the Phillies would have had him.

The next 12 months will be about Gillick and Amaro trying to maximize the amount of talent the Phillies can bring back in trades of veterans and allowing young organization talent to develop in the minor leagues.   But soon thereafter will be many more changes.  Without the very loyal Montgomery making the decisions, expect a very different organization in 2016.

Around the NHL: Brodeur says goodbye, Mike Richards and more 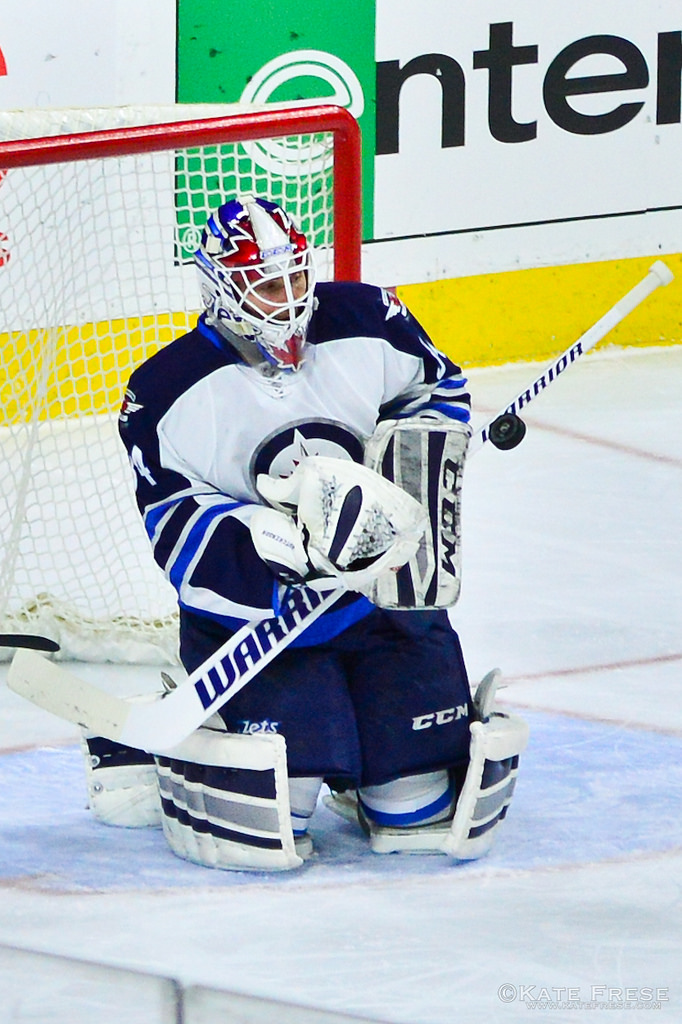 It was the end of an era yesterday as longtime Devils goalie Martin Brodeur officially announced his retirement. Brodeur spent 21 seasons in New Jersey. He won three Stanley Cups, four Vezina trophies, and five Jennings trophies. He is the all time NHL leader in wins and shutouts. He will assume a role as a special assistant to Blues general manager Doug Armstrong. 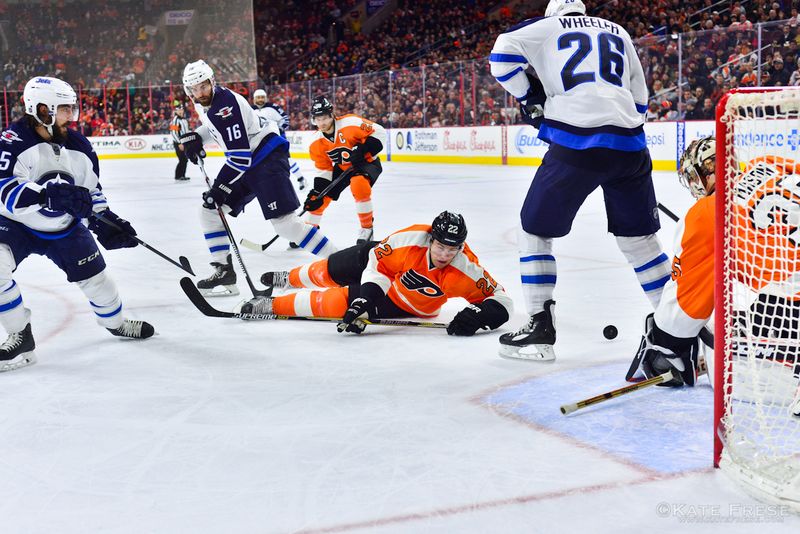 Click here to view our photographer Kate Frese's photos from last night's game against the Jets. 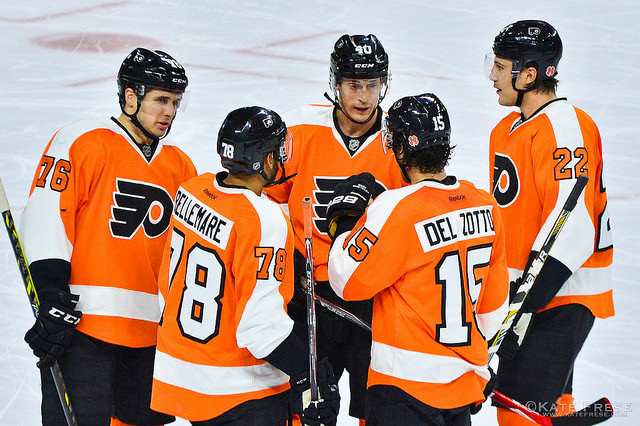 As the final horn sounded on Thursday night, the scoreboard showed a 5-2 Flyers victory over the Winnipeg Jets. It marked one of the Flyers more impressive games of the season.

In December, the Flyers showed character with a win over the Jets by rallying for two goals in the third and scoring the game-winning goal 10 seconds into overtime. This time, the Flyers controlled the game against a team that had won five of their last six games.

And they used some very unlikely heroes to do so. 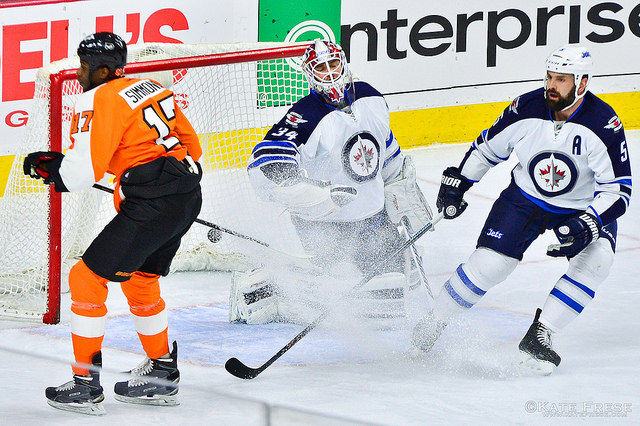 When the Flyers made the trip to Winnipeg in December, it took a third-period comeback to claim a victory. This time, the tables were turned. The Flyers carried a 3-2 lead into the third.

Just as they did on that December night, the Flyers closed the game strong, scoring two third-period goals to down the Winnipeg Jets, 5-2, on Thursday night at Wells Fargo Center.

The Phillies have announced the signing of 30 year old pitcher Chad Billingsley to a 1 year, $1.5 million contract. Last week Jim Salisbury had reported that the Phillies had interest in Billingsley and as has been the case much of this off season, they add another low risk/high reward arm to their staff.

Billingsley thrived for most of his career with the Los Angeles Dodgers as a mid-rotation starter with a career 3.65 ERA. He was very effective in 2008 pitching to a 3.15 ERA over 200 innings and helping to lead the Dodgers to the NLCS where  (as we all know) he eventually succumbed to a powerful Phillies line up.  His strong first half in '09 lead to him making the NL All Star Team. The past two seasons he has battled injuries and while rehabbing last season in the minor leagues, he was shut down for season ending surgery.

A local tie is that Billingsley lives in Reading in the off season which probably helped spark the interest between both him and the Phillies who were looking for another starter. Billingsley will wear number 38.

In a corresponding move the Phillies announced that Cesar Jimenez has been designated for assignment to make room for Billingsley on the 40-man roster. For weeks, the Flyers have been waiting out the results of tests on Kimmo Timonen. The veteran defenseman has missed the entire season with blood clots, but has been working his way back in an effort to make a comeback.

On Tuesday, GM Ron Hextall offered a positive report, but would not confirm a full prognosis. Head coach Craig Berube may have let the cat out of the bag.

Berube hinted that Timonen will return to the Flyers this season, saying he's excited for the defenseman's return. But Hextall said to hold the phone on the comeback talk just yet.