Player and Play of the Week: January 4-10 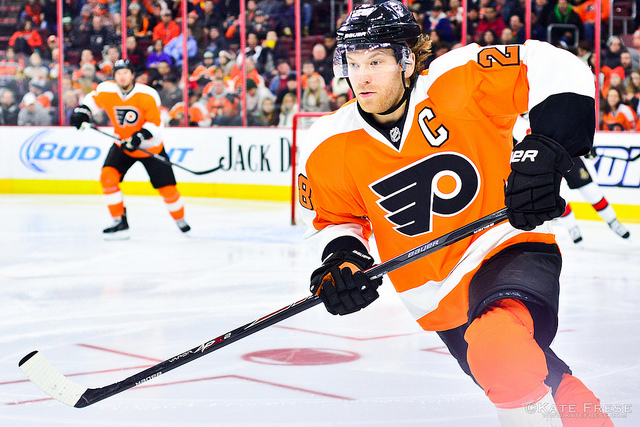 Last week, it was difficult to pick a Player and Play of the Week without the benefit of a Flyers win. This week, the Flyers provided two wins before suffering a loss to Boston on Saturday.

Still, a 2-1-0 week certainly wasn't as horrible as the close to the road trip, and with another week in the books, it's time to pick our Player and Play of the Week: January 4-10.

Our Player of the Week is the recently-named All-Star Claude Giroux. Giroux suffered an injury late last week that held him out of last Saturday's game. But on Tuesday, he returned to the Flyers lineup and assisted on Wayne Simmonds' game-tying goal in the third period of the Flyers 2-1 shootout win. He also assisted on Jake Voracek's game-winning goal in overtime on Thursday and scored the Flyers only goal against Boston on Saturday for a total of three points.

Our Play of the Week goes to the Flyers other All-Star Jake Voracek. Voracek's game-winning goal on a 4-on-3 power play in overtime against the Capitals was clutch as he fires a one-timer from the high slot that deflected off the stick of a Capitals penalty killer and past Braden Holtby.

The Flyers host the Tampa Bay Lightning on Monday night before hitting the road to face the Washington Capitals on Wednesday night. They will return home on Thursday to face the Vancouver Canucks before closing out next week's action by facing the Buffalo Sabres on the road on Saturday. Check back next week for another Player and Play of the Week selection.