Eagles Flyers Phillies Sixers About Us Write For Us
Flyers down Toronto for fourth straight win
This Week in Flyers History: Week ending February 1 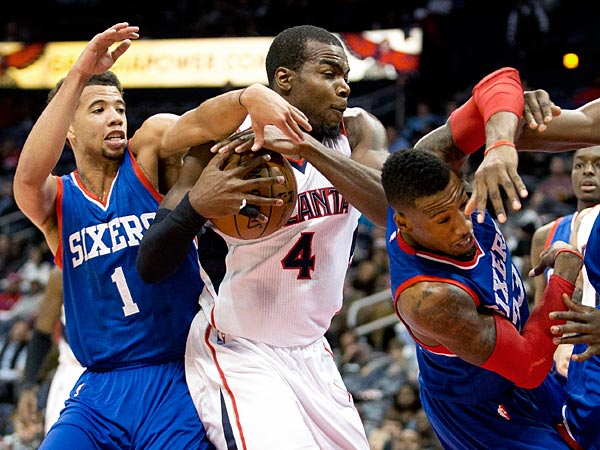 I think all of us Sixers fans came in to this season thinking we’d settle for moral victories in the absence of actual victories. Well, this game was the most moral-victoryest moral victory of the season.

The Sixers battled back from a 21pt first half deficit behind a barrage of 3s, taking a 2pt lead with 3 minutes to go in the game. Ultimately the Hawks poise down the stretch won out as the Sixers fell 91-85. It was the Hawks 19th win in a row, while the Sixers bid for their first 3-game winning streak of the season fell short. Al Horford led the way for the Hawks with a 23pts and 11 boards, including 11pts in the 4th and a huge bucket down the stretch to seal the game. The Sixers had 6 players in double figure scoring and Nerlens Noel had his 7th double double of the season with 11pts and 10rebs.

If the Eastern Conference weren’t so damn bad, the Hawks would undoubtedly be the best team in the NBA. They become the first team in the league to notch 40 victories, and their passing and defense was on display all night. Which is exactly why Malik, towards the end of the game, said that he considered this game a win for the Sixers simply because “they got so much better just playing this game.” The Sixers spotted the Hawks a nice 12 pt lead in the first quarter after committing 9 TOs leading to 10 Atlanta points. They only managed 10 pts in the first quarter, and the Hawks seemed to be toying with the Sixers, getting to the rack at will, trapping MCW at the 3pt line, and generally wreaking havoc with the Sixers on both ends of the court. After playing the Hawks close to even in the 2nd quarter, Brett Brown alluded at the half to the idea that the Sixers needed confidence in their game plan and had to take the shots they like.

Well ... we know Hinkie, Brown, analytics, et al all like the 3 ball, and thus the Sixers fired up 22 3s in the 2nd half. Ultimately they shot 14-35 from downtown (40%), both their most made and attempted 3s of the season. Hollis Thompson, who hasn’t made more than 2 3-pointers since Dec 12th, went 4-6 from the 3pt line tonight. McDubs and LMAM both dropped two from downtown. But the guy with ice in his veins tonight was Jerami Grant, who went a career best 3-3 from downtown and looked way more confident than he should’ve been. This is a guy who was not rated as a good shooter coming out of Syracuse, but has been silencing the naysayers of late shooting 43% from downtown over his last 10 games to go with some impressive defensive performances. KJ McDaniels was the darling of the drafts  2nd round early this year, but it really is looking like Hinkie got 2 keepers in the second as Jerami’s game comes on.

Brett Brown and Hawks coach Mike Budenholzer share a friendship dating back to their shared time as Spurs assistant coaches, and one has to imagine they have a shared philosophy on what the “right way” to play the game is (The Tree of Pop is strong). Watching the Hawks, it’s obvious to see the value they place on playing D and moving the ball. The Hawks are 5th in the league in defensive rating (pace adjusted defense), and lead the league in assisted field goals from both 2pt and 3pt range. Well, those plucky Sixers rank 12th in defensive rating, 11th in assisted 2pt field goals and 2nd in assisted 3pt field goals. Perhaps given a bit more talent and a lot more experience, the Sixers could become a team like the Hawks. Going from 26-straight losses last year to 19-straight wins in the next few years would be quite the feat.

For the time being however, the boys from Philly have to settle for a front row seat to one of the best shows in the league. They can take pride in knowing they hung in there with the best. But more important than taking pride is taking notes so that some day soon, we can turn those moral victories into actual victories.