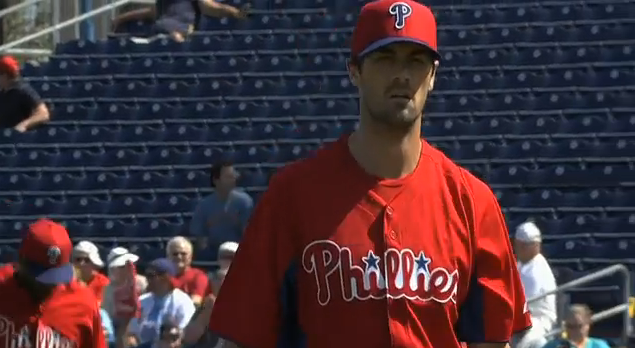 Pitchers and catchers reported to Clearwater today for the first activity of the 2015 season – spring training.

Many estimate that the Phillies will have a record-low amount of wins this year and might go as the worst team in baseball. A sad, yet somewhat true assumption. The fans know it, and even the players know it – there will not be playoff baseball in Philadelphia this season.

Among the many players speaking to the media today, Cole Hamels made it clear that he wants to win and that if he is a in a Phillies uniform, it won't happen any time soon.

"I just want to win,'' Hamels told USA TODAY Sports in his first interview since the end of the 2014 season. "That's all. That's all any competitor wants.

"And I know it's not going to happen here.

"This isn't what I expected. It's not what the Phillies expected, either.

Hamels doesn't seem to be trash talking his team or his teammates, but rather the truth.

In 2012, Hamels signed a contract extension worth $144 million over six years. At the time he said that he wanted to spend the rest of his career as a Phillie, but fast forward two and a half seasons and the mindset has changed.

With the departure of SS Jimmy Rollins back in December and the evident re-building phase the team is about to engage, Cole Hamels knows that his days in Philly are numbered.

"I wanted to see where I was going to spend my next four years. Now that I'm here, I plan on being here for the next six weeks. I think it would be pretty chaotic if that's not the case. But it's out of my control.

"All I can do is get ready this spring, be ready for opening day, and be prepared for the long season.''

Hamels is also anticipating on pitching in October this season.

"The reason the Phillies committed a huge contract to me,'' says Hamels, "wasn't just to pitch in the regular season, but the postseason too. That's why they paid me that kind of money. They planned on being in the playoffs every year, or at least contending.

"I want that too. I want to be in the playoffs every year. That's where you make a name for yourself. It's not about the Cy Young awards and MVP awards. It's about winning championships. You want to be in a place where you have a chance to win.

"And when we were winning, with the fans and the passion they have for sports, it was the best place to be.''

The sad part is that he is completely right. It would be a crime if the Phillies didn't give Hamels, who is entering the prime of his career, a shot at winning another title or numerous ones at best. The Phillies haven't been to the postseason since 2011 and by the looks of it they may not be there for the next five-ten years. By then Hamels' contract will have expired and he'd be headed out the door anyway.

With numerous rumors that Hamels was being shopped to teams such as the Dodgers, Red Sox, and Padres, Hamels stated that he's "all ears" when it comes to going to a winning team and that the Phillies need to move on from him and let his career path go the way it wants.

"In the grand scheme of things,'' Hamels says, "we have a very small window in our lives. You understand this is going to end. The Phillies will go on forever, but we know our careers are going to end.

"And I want to go to a place where I can win again."

Hamels has four years and $96 million left on his contract as well as a fifth-year option that would make it worth $110 million. In his contract he has 20 teams on his no-trade list. The only American League teams that can trade for him without his consent are the New York Yankees and Texas Rangers.

The fact is that the Phillies are going to ship Hamels somewhere this season and another fact of the matter is that they're going to ask top dollar for him. It's up to the front office and even Hamels' input on where he will finish out the 2015 season.

"There's no better feeling than winning, and we enjoyed that for a long time in Philadelphia,'' Hamels says. "I just want to win again. I'm no different than other guys. You just want to be in a position to win.

That indeed, Cole. That Indeed.