Flyers fall to Sabres in shootout 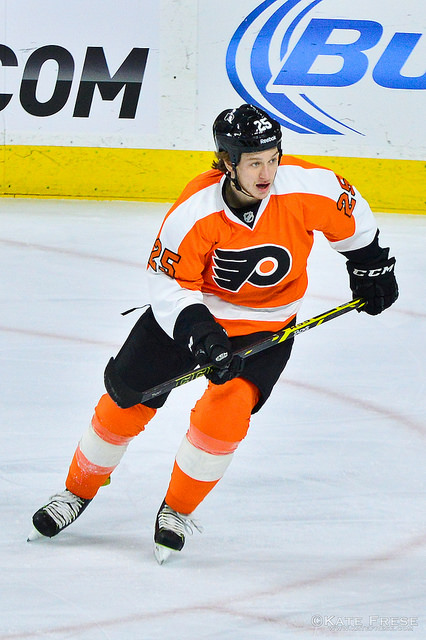 As the Flyers entered this four-game stretch with a pair of games each against the Blue Jackets and Sabres, it was their best chance at making up the points deficit.

The Flyers squandered away a point in Columbus, but managed to win in Buffalo on Sunday before dropping a disappointing game to Columbus to open the homestand.

Thursday was no different as the Sabres gave the Flyers a run for their money and pushed the game to overtime and a shootout, where the Flyers would fall, 3-2, at Wells Fargo Center.

The Sabres jumped out to an early lead in the first. Off a turnover by Michael Del Zotto, a shot through traffic by Rasmus Ristolainen knuckled to a wide-open Nicolas Deslauriers. He fanned on the shot attempt but still beat Ray Emery to give the Sabres the lead at 4:41.

The Flyers would answer less than three minutes later at 7:23. A point shot by Braydon Coburn sailed well wide of the net but caromed off the end boards right to the tape of Ryan White who buried it past Michal Neuvirth to even the score.

Just 38 seconds into the second, Buffalo regained the lead as Brian Gionta jumped on a rebound in the crease. It was Gionta's sixth goal of the season.

A power-play opportunity would allow the Flyers to even the score. Wayne Simmonds spun a shot on goal from the slot and Jake Voracek was there to bury the rebound for his 19th goal of the season.

Neither team scored in the remaining four-on-four play of overtime either, sending the game to a shootout.

Voracek and Gionta scored in the first round of the shootout. Claude Giroux and Simmonds were stopped by Neuvirth while Emery made some acrobatic saves at the other end. In the fourth round, Sean Couturier was also stopped by Neuvirth and Brian Flynn scored on his attempt to give the Sabres the win.

Emery made 30 saves during the 65 minutes of game action, recovering from a rough start.

The Flyers did make up one point in the standings, but remain six points back of the final playoff spot as a much tougher stretch of games begins over the weekend.

The Flyers are back in action on Saturday afternoon as they host the NHL's best in the Nashville Predators. The opening face-off is set for 1 p.m.