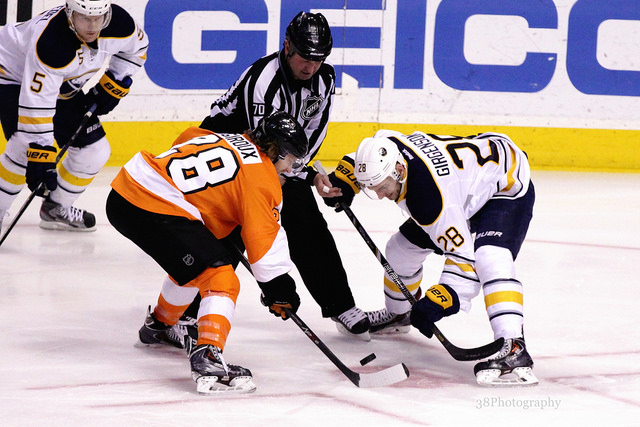 In three of the Flyers last four games, the focal point has been the lost point. Three valuable points in the standings were there for the taking and the Flyers failed to gain any of them.

That's what makes Sunday's game against the lowly Buffalo Sabres not only a huge game for the Flyers dimming playoff hopes, but adds a certain sense of loss. If the Flyers would have earned even two of the three extra points, they would be five points out of a playoff spot as Sunday night's game gets underway. Instead, they are seven back.

A chance to trim into that margin comes at 7:30 when the puck hits the ice at First Niagara Center.

The Flyers will get a boost with the return of Michael Raffl to the lineup. Despite Raffl's success on the first line with Claude Giroux and Jake Voracek, he will move into the center position on the third line with Ryan White and R.J. Umberger. The other three lines will stay intact.

One Flyer who has been hot of late is Wayne Simmonds. Simmonds scored two goals in Friday's loss in Columbus and has five points over the last three games. He leads the team with 21 goals on the season.

The Flyers will also get Braydon Coburn back in the lineup. Coburn has been out since Jan. 12 with a broken foot. Andrew MacDonald is also back with the team after being a late scratch on Friday due to a death in his family. He will be a healthy scratch.

The Sabres have struggled mightily all season, but have been horrendous of late. Entering Sunday's game, they have lost 20 of their last 24 games, including nine of their last 11 games at home.

The Sabres recently made headlines with a blockbuster trade, acquiring injured forward Evander Kane and defenseman Zach Bogosian from Winnipeg for Tyler Myers and Drew Stafford.

Tyler Ennis leads the Sabres with 31 points and 18 assists. Five Flyers have at least 32 points this season.

The Sabres also recently traded their top goaltender, Jhonas Enroth, to Dallas for Anders Lindback. In goal, the Sabres will start Michal Neuvirth. Neuvirth is 3-14-1 with a 3.37 GAA and .907 save percentage.