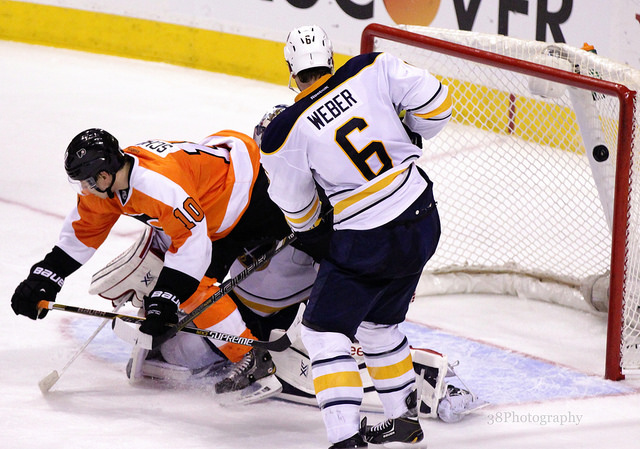 Thursday night will start with a celebration of one of the Flyers most storied defensemen. But following the ceremonies for Eric Desjardins induction into the Flyers Hall of Fame, there is a crucial task at hand.

A 5-2 loss to the Columbus Blue Jackets appeared to be the end of the Flyers playoff hopes. But entering Thursday's game against the NHL-worst Buffalo Sabres, the Flyers trail the Boston Bruins by seven points for the final wildcard spot in the Eastern Conference.

The opening face-0ff between the Flyers and Sabres will follow the ceremony for Desjardins and begin approximately at 8 p.m.

The Flyers had managed at least a point in their previous nine games before Tuesday's loss to Columbus.

One common thread during the point streak was secondary scoring. No one is playing better than Wayne Simmonds, who has four goals and seven points in his last five games.

It has been a quiet stretch for Claude Giroux and Jake Voracek. The pair of All-Stars has combined for eight points since the All-Star break. Even with the recent struggles, Voracek is still tied for second in the NHL with 60 points.

The pair was reunited with Michael Raffl for the final two periods on Tuesday. Raffl scored the game-winning goal against Buffalo on Sunday in his first game back following an illness.

The Flyers will use the same lineup as they did on Tuesday against Columbus. That means Ray Emery is back in goal. Emery is 10-10-3 this season with a 3.22 GAA and .890 save percentage. Emery also made 21 saves in Sunday's win in Buffalo.

A trying season continued for the Sabres as they suffered another loss on Tuesday in a shootout to the Devils. The Sabres have lost 22 of their last 26 games, and have a road record of 5-20-2.

The Sabres have received a boost on the blue line with the addition of Zach Bogosian. The defenseman debuted with Buffalo on Sunday against the Flyers and was a human wrecking ball, tallying 11 hits.

In 57 games this season, the Sabres have just four players who have broken the 20-point mark. The Flyers have eight.

Leading the way is Tyler Ennis. Ennis leads the team with 32 points and is tied for the team lead in goals with 14. Zemgus Girgensons also has 14 goals and has 27 points. Also in the 20-point club are forwards Matt Moulson and Chris Stewart.

Bogosian instantly took over the spotlight on the blue line, and joins a group of defensemen featuring Nikita Zadorov, Rasmus Ristolainen and Mike Weber. Zadorov scored Buffalo's only goal on Sunday.

In goal, the Sabres will start Michal Neuvirth. Neuvirth is 3-15-2 with a 3.16 GAA and .911 save percentage. Neuvirth made 28 saves in the loss to the Flyers on Sunday.