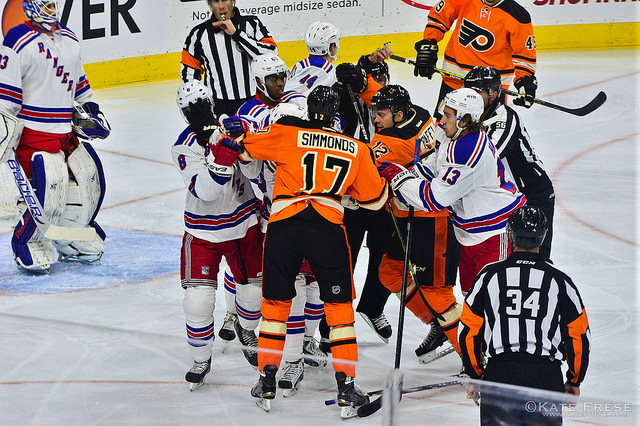 For the first time since Nov. 29, the Flyers and New York Rangers will renew their rivalry in an 8 p.m. faceoff at Wells Fargo Center. Broad Street will meet Broadway for the fourth and final time this season, barring a rematch of last year's tense first-round playoff series.

Both teams previously met in a 10-day span between Nov. 19-29, with the Rangers winning all three games. The Rangers (38-16-6) outscored the Flyers by a 10-2 margin, with two shutouts along the way. A win tonight would give them their first season sweep of the Orange and Black since the 2011-12 season.

The Flyers, of course, will be playing their first game without Kimmo Timonen on the roster since April 8, 2007. Timonen was believed to be making his season debut for Saturday's game, but that speculation was brought to an end upon his trade to Chicago.

Steve Mason will start between the pipes for the first time since Feb. 8, following arthroscopic surgery on his knee. Mason's 1-1 against the Rangers this season, allowing five goals. He's played spectacularly in both games, but has been saddled by a lack of offensive support -- essentially, the story of his season.

Derek Stepan leads the Rangers in points against the Orange and Black this season, with five. Rick Nash also enters with 37 goals -- second-most in the league. Meanwhile, the Flyers will deploy Jakub Voracek and Brayden Schenn, who each have two points against the Rangers. With 64 points, Voracek is tied with Patrick Kane and division rival John Tavares for tops in the league.

The Rangers are likely to counter with Cam Talbot, who's been responsible for both shutouts against the Winged P. Talbot's saved all 57 pucks that the Flyers have shot at him, and has started 11 of the Rangers' 12 games following Henrik Lundqvist's throat injury -- going 8-1-2 in that span.

Additionally, the Rangers enter tonight's game with a four-game winning streak and 10-game points streak -- capped off by a 4-3 win over Arizona on Thursday -- a game they trailed 3-1 in the first period. The Flyers are looking to snap a two-game regulation losing streak that has seen them fall to six points behind Boston for the Eastern Conference's second wild-card playoff spot.