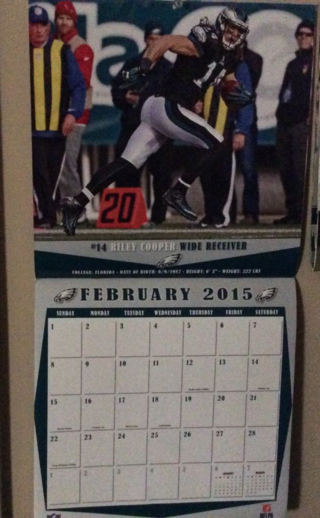 Philadelphia Eagles wide receiver Riley Cooper has had a hard time restoring his image after the July 31, 2013 post on Crossing Broad that showed Cooper making a racial slur in reference to African Americans at a Country concert.    Since then, Cooper has tried to keep his nose clean, slowly rebuilding the team's trust.   However, the publication of the 2015 Eagles calendar has upset the public once again with an unfortunate placement of Cooper Deadspin reports.

Whether it was accidental, or someone was playing a cruel joke, Cooper appears on the team calendar for the month of February.  Yes, February is Black History month.  The Eagles pointed out that a third party vendor was a responsible for the production of the calendar.

The Philadelphia Eagles released the following statement, as seen on Deadspin:

The calendar does feature the seal of the NFL Players Association.

Whether the calendar was put together as some sort of cruel joke by an employee, or if it was just one unfortunate coincidence is unclear.  What is clear is that an old wound was reopened today and many are upset.  Let this be a lesson that such language will continue to stick with you.