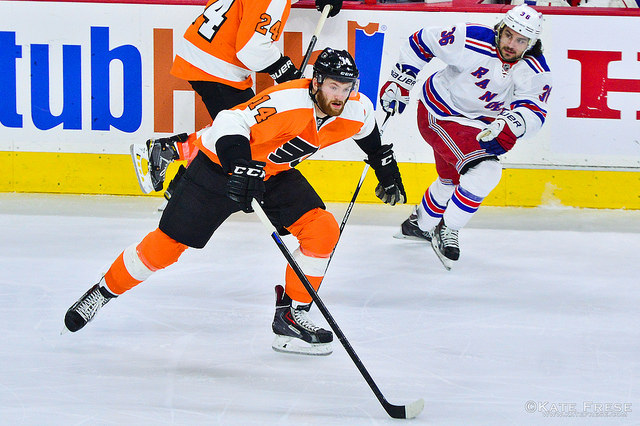 PHILADELPHIA -- Michael Del Zotto's eighth goal of the season early in the third period -- against the team that drafted him, nonetheless -- gave the Flyers a 4-2 win Saturday over the New York Rangers.

Del Zotto's shorthanded tally came from the left faceoff circle just over Cam Talbot's glove, off a feed across the slot from Sean Couturier. The Orange and Black now fall to 1-3 in the season series with the Rangers, and avoid their first season sweep since 2011-12.

Matt Read opened the scoring with his sixth of the season at the 9:42 mark of the first period, but J.T Miller tied it 24 seconds later with his sixth tally, after a Luke Schenn turnover in the defensive zone.

Read's goal was the first goal that Talbot allowed against the Flyers (27-25-11) this season, as he posted two shutouts against them in November. The last time he allowed a goal against the Orange and Black was Oct. 24, 2013 -- a game in which he allowed goals to Read and Braydon Coburn in a 2-1 loss.

John Moore gave the Rangers (38-17-6) their first lead of the game with his first of the season midway through the second stanza, but Michael Raffl tipped in a Coburn shot for his 14th of the year, tying the game at 2 heading into the second intermission.

Wayne Simmonds also tallied his team-leading 25th of the season with just 0.3 seconds to go on an empty net, effectively sealing the game.

In his first action since Feb. 8, Steve Mason was remarkable, making 34 saves on 36 shots. He showed a quick sign of rust early on as Derek Stepan scored on a dump-in from the neutral zone just seven seconds in, but the goal was overturned after video review determined that the Rangers were offside.

Talbot himself was steady between the Rangers' pipes, as he stopped 30 of 33 pucks. He now falls to 2-2 all-time against the Orange and Black.

Couturier finished with two assists, for his sixth multi-point game of the season and first since Dec. 29.

Both teams were also stalwart on the penalty kill, as they each killed three penalties -- allowing no power play goals. Claude Giroux took two of the Flyers' penalties, including a debatable slash against Derick Brassard in the dying seconds of the second stanza.

The Flyers also lost Nicklas Grossmann in the second period, after blocking a Rick Nash shot. The shot hit him just under the left shoulder, and he did not return to game action.

Despite the win, the Flyers still remain six points behind Boston for the East's final playoff spot, as the Bruins took down Arizona by a 4-1 margin on Saturday.

The Flyers will next take the Wells Fargo Center floor for the Flyers Wives Carnival on Sunday, and return to the ice Tuesday for a matchup with Calgary.