Phillies should use Ben Revere to acquire a starting pitcher 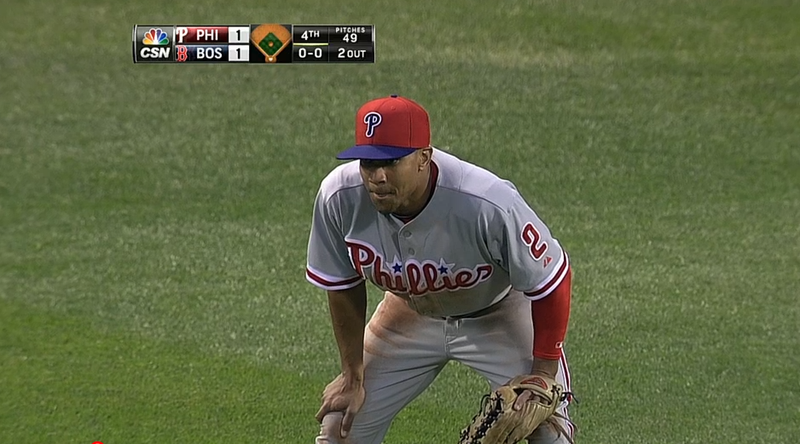 The Phillies decided that they could no longer tolerate Ben Revere's arm in center field.  It is almost funny, since Revere has made one highlight reel catch after another in left field.  The shame of the situation is that the Phillies simply cannot afford to waste left field on someone with Revere's OPS in left field at the expense of their only chance at power.   With Odubel Herrera showing some raw talent and center field becoming rightfully his, the Phillies should look for a trade opportunity with another club for Ben Revere.

The Phillies spent 2012 giving left field to Juan Pierre.  The Juan Pierre that the Phillies had then is very much reminiscent of Ben Revere.  They are quick and can steal some bases; they both have the ability to hit .300.   But for the lack of power they both brought, the Phillies need to do better.  If the Phillies play an outfield of Ben Revere, Odubel Herrera, and Domonic Brown, that means that six of their eight starters will be left-handed hitters.

The Phillies announced their starting rotation.  Well, some of it, anyway.  Who will pitch fifth?  The Phillies have no idea.  They tried to pitch Miguel Alfredo Gonzalez as a starter — something I have been opposed to since the day they signed him — and he was so bad they had to send him to minor league camp.  With Cliff Lee hurt and Chad Billingsley only starting to pitch, the Phillies need another starter.  The starter is not just for now; it's for later.

The Phillies young bullpen will only remain good if the team does not force the Phillies to overuse it.  The Phillies need innings eaters, who can pitch 200 innings, even if it is to a 4.50 ERA.  Someone like Kyle Kendrick, but not Kyle Kendrick.   The Phillies might be able to get someone not good enough for someone's rotation in exchange for Revere that could come into the Phillies rotation right now.  Maybe a low-A prospect that might or might not work out.

Finally, let's face it: Revere is not going to be part of the Phillies' next core of young players.  Revere is ahead of everyone else in age, and has already begun his salary arbitration years and will be out of the door sooner than later.  If Herrera is the centerfielder of the future, then the Phillies should move on from Revere now if they can get a starting pitcher piece that will help stabilize the future.

If not Ben Revere, another left-handed outfielder has to go.  Grady Sizemore might be useful to someone, but the Phillies would likely have to just cut him.   Sizemore has not played much this Spring, as Phillies have given extended looks to Odubel Herrera, Darin Ruf, and the right-handed bat in Francoeur.

Do not let a temporary injury cause the Phillies to carry all these left-handed hitters.  Should Brown start the year on the disabled list, the Phillies could give 40-man roster occupant Aaron Altherr a couple weeks in the big leagues and option him right back to the minor leagues.    If the Phillies wait until Opening Day lineups are set, they will lose their opportunity to trade Revere.