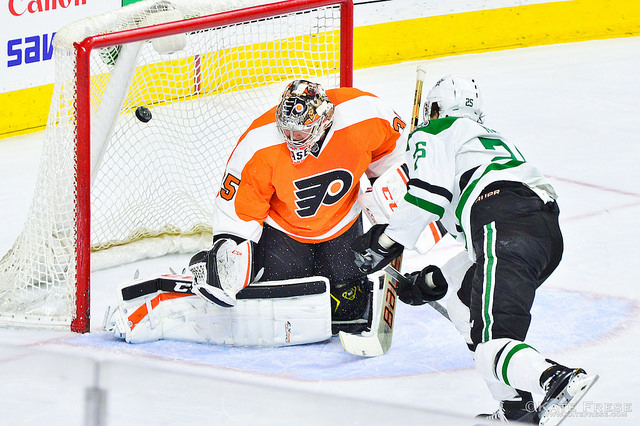 The last two games have been a story of frustration. Things got no better on Tuesday night.

Steve Mason stood on his head, keeping the Flyers in the game for most of the night. But with less than seven minutes to play, the Stars were able to solve Mason at last, taking the lead and eventually holding on for a 2-1 win over the Flyers at Wells Fargo Center.

The Flyers stormed out of the gate and struck for the game's first goal at just 1:13. Luke Schenn fired a shot through a screen that was deflected by a Dallas defenseman and past Kari Lehtonen. It was Schenn's third goal of the season.

For most of the first period, the Flyers carried the play. But as the midpoint of the period passed, the Stars capitalized on one of their chances.

Brett Ritchie flew past Luke Schenn and into open space in the slot and ripped a shot past Mason to even the score at 11:23.

Both teams failed to score on their only power-play opportunities of the period. The Flyers led in shots after 20 minutes, 14-9.

Dallas controlled a majority of the second period with Mason standing tall. Mason made a series of impressive saves on two separate occasions, keeping Dallas off the board.

The Flyers, meanwhile, continued to generate solid chances in the few they would get. There was three odd-man rushes in the second staved off by Lehtonen.

Mason was strong again in the third, continuing to make impressive saves as the Stars pressed for the go-ahead goal.

Mason could not stop the Stars on a two-on-one with 6:10 to play. Colton Sceviour led the rush after Carlo Colaiacovo was caught pinching in the offensive zone. His pass to the slot was tipped in by Vernon Fiddler for his 11th of the season to give Dallas the lead.

Dallas continued to stymie the Flyers for the remaining time. The Flyers had just three shots in the final period.

Mason made 37 saves in the loss. Lehtonen made 25 saves in picking up his first career win over the Flyers. The Flyers fell to 28-27-13 on the season with the loss.

The Flyers return to the ice on Thursday night as they travel to face the St. Louis Blues. The opening face-off is set for 8 p.m.