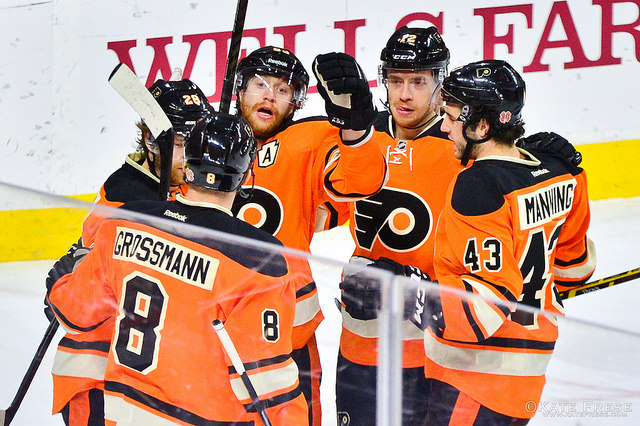 Every time the Penguins fired a shot, Steve Mason was there to answer the call. Through 22 first-period shots, Mason made 21 saves, easily keeping the Flyers in the game.

One save stood out, a glove save on Craig Adams robbing him on a rebound chance. It was arguably Mason's best save of the season.

That save kept the game scoreless, and though the Penguins would score first, the Flyers would answer to tie the game late in the first and eventually claim a 4-1 win on Sunday afternoon at Wells Fargo Center.

The only shot to beat Mason in the first was a turnaround shot by Brandon Sutter at 16:21 of the first. The power-play goal was his 19th of the season.

The lead was short-lived for Pittsburgh, as the Flyers would get a late power play. Jake Voracek beat Thomas Greiss with a one-timer from the right circle to even the score with 42 seconds remaining in the first.

The play evened out during the second period. Both teams would have power-play chances to take the lead. The Penguins failed to score on their man advantage. The Flyers cashed in.

A deflection by Brayden Schenn sailed into the air before landing in the crease and bouncing into the net. Mark Streit and Voracek assisted on Schenn's 17th of the season.

The third period was a hard-fought battle that featured scrums, physicality and solid scoring chances all around.

Through it all, Mason was the star, making 46 saves en route to his 17th win of the season.

The Flyers would add some insurance for Mason at 15:05, as Sean Couturier set up Ryan White for his sixth goal of the season to give the Flyers a two-goal lead.

That was enough for Mason and the Flyers to complete the season sweep of the Penguins.

For added measure, the Flyers capped the scoring with 10 seconds remaining as Michael Del Zotto picked up his 10th goal of the season from Schenn and Claude Giroux.

Schenn finished the game with three points. Voracek and Streit each had two points in the win. Sidney Crosby was held without a point for the first time in five games. Evgeni Malkin was minus-one and had one shot in his return from injury.

The Flyers return to the ice on Tuesday night as they face the New York Islanders. The opening face-off is set for 7 p.m.