Game 78 Preview: One final Battle of PA against Penguins for Flyers 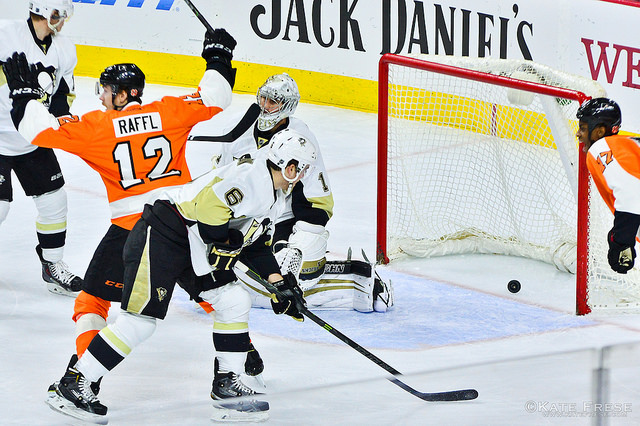 The Battle of Pennsylvania, as it is affectionately known, has never failed to offer entertaining hockey no matter what the standings say.
For the Flyers, Sunday's final edition of the Battle of Pennsylvania in the 2014-15 season is for pride, just as it was last Wednesday in a 4-1 win in Pittsburgh.
But for the Penguins, there is quite a bit at stake. The Flyers and Penguins take the ice for the opening face-off at 12:30 p.m.
The Flyers are coming off their final road game of the season, a 3-2 shootout loss in Carolina on Saturday. Michael Raffl and Sean Couturier scored in the loss. Nick Cousins scored the Flyers only goal in the shootout.
Raffl has 21 goals on the season, tied for third on the team with Jake Voracek and trailing only Claude Giroux's 23 and Wayne Simmonds' 28.
In Wednesday's win in Pittsburgh, Brayden Schenn scored two goals with Vincent Lecavalier and Carlo Colaiacovo picking up the other two goals.
Steve Mason will get the start in goal again for the Flyers, after picking up the win on Wednesday by making 24 saves. Mason is 16-17-11 with a 2.22 GAA and .928 save percentage.
The Penguins enter Sunday's game with their playoff hopes in jeopardy. They are currently tied for one of the wildcard spots with the Boston Bruins, but have to watch for the Ottawa Senators, who are hot on their heels.
The Penguins blew a 2-0 lead in a 5-3 loss to the Columbus Blue Jackets on Saturday. As of Sunday's game, Pittsburgh and Boston each have 95 points. Ottawa has 92 points. Pittsburgh is 3-6-1 in their last 10 games.
Sidney Crosby has been on a tear of late. The Penguins captain scored his 300th goal on Wednesday and added a goal on Saturday for his 850th career point. He has points in five straight games and 11 points in his last 10 games. Crosby is the NHL's points leader with 81 points, including 27 goals.
There is a chance that Evgeni Malkin will be in the lineup on Sunday after missing the last two games with an undisclosed injury. Malkin will likely be a game-time decision. Malkin has 70 points on the season.
The Penguins will also be without top defenseman Kris Letang as he continues to recover from a concussion.
Patric Hornqvist and Chris Kunitz provide scoring threats for the Penguins as well. Hornqvist is third on the team with 24 goals this season. Kunitz has 17 goals and 23 assists.
Defensively, the Penguins are doing a lot of patchwork without Letang as well as Olli Maatta and Christian Ehrhoff. The Penguins only dressed five defensemen for Wednesday's game – Rob Scuderi, Paul Martin, Ben Lovejoy, Ian Cole and Derrick Pouliot.
Marc-Andre Fleury will likely get the start for Pittsburgh. Fleury is 33-19-8 on the season with a 2.32 GAA and .920 save percentage.
Game Notes