Eagles Flyers Phillies Sixers About Us Write For Us
Afternoon delight: Phillies and Rockies face off in South Philadelphia for Saturday matinee
Sizing Up Sandberg: Amaro and Ryno both under fire

Harang strong, bullpen and bats not as Rockies down Phillies 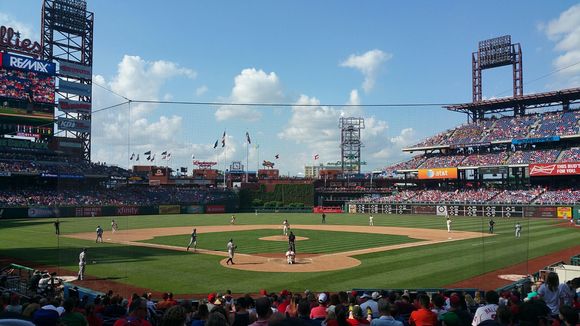 Aaron Harang pitched decently enough to win, but thanks to another poor offensive showing from the Phillies lineup, Harang's effort was wasted. Harang went six innings and allowed just two earned runs. Both runs were solo home runs: one from third baseman Nolan Arenado and one from Mike McKenry.

The Phillies struck first in the bottom of the first inning. With Chase Utley at first base, Ryan Howard lined a double to being Utley home.

Luis Garcia came in to start the seventh inning in relief of Harang and he was unable to hold the Rockies down. After Carlos Gonzalez singled, Ben Paulsen doubled to bring home Gonzalez with one out.

Jake Diekman provided no relief, allowing a single immediately to pinch hitter Rafael Ynoa to allow the Rockies fourth run of the day. The damage would've been further when Charlie Blackmon stepped to the plate, if not for a stellar up-the-middle play by Freddy Galvis, who threw behind his back to Chase Utley at second base to get the lead runner. Justin De Fratus got the last out to end the damage.

After 56 straight innings without a home run, the Phillies thought they might have one in the eighth inning with two outs. Jeff Francoeur lined a home run to the left field fence, which was interfered with by a fan. Though the ball didn't go over, it might have had a fan not reached up with a glove. So, it was a double for Francoeur. Carlos Ruiz lined out, ending the threat.

Ken Giles came out for the eighth inning and gave up a leadoff double to Troy Tulowitski. Carlos Gonzalez moved Tulowitski to third base for the first out. Nolan Arenado remained hot to line a two-out single to give the Rockies a 5-1 lead.

In the bottom of the eighth Cesar Hernandez would end the home run drought facing Rockies reliever Rafael Betancourt. Batting for Ken Giles, Hernandez smacked a solo shot to right field. The home run was Hernandez's second career home run and first of the year to make it 5-2.

Ben Revere followed with a walk. On the last pitch to Revere Betancourt grimaced and ended up leaving with an injury. The "injury" turned out to be "flu-like symptoms". Boone Logan replaced Betancourt. After Freddy Galvis was retired, Chase Utley grounded into a fielder's choice - but shifted Nolan Arenado -in the shortstop slot - missed second base to bring the trying run to the plate in Ryan Howard.

Howard struck out. With two outs and the two big lefties out of the way, the Rockies turned to the bullpen to summon righty Brooks Brown to face Maikel Franco. Brown got Franco to ground out to short to end the threat.

Jeanmar Gomez relieved Giles in the ninth. After allowing a single to leadoff hitter Brandon Barnes, Gomez retired the next three batters to end the inning. The Phillies were left to their last at bat.

Despite losing a no-hitter last night on a Cody Asche defensive shift, the Rockies did it again with closer John Axford on the mound. Asche again beat the shift with a single to left to lead off the ninth. Jeff Francoeur followed with a single of his own to put two on with no outs. Carlos Ruiz lined out to right field and it brought Cesar Hernandez to the plate, who took third base in a double switch.

Hernandez was leading the Phillies with a .300 average with runners in scoring position. Hernandez couldn't do it this time, grounding into a fielder's choice that left runners at first and third. Ben Revere was next at the plate.

Revere looked at strike three to give the Rockies a 5-2 victory.