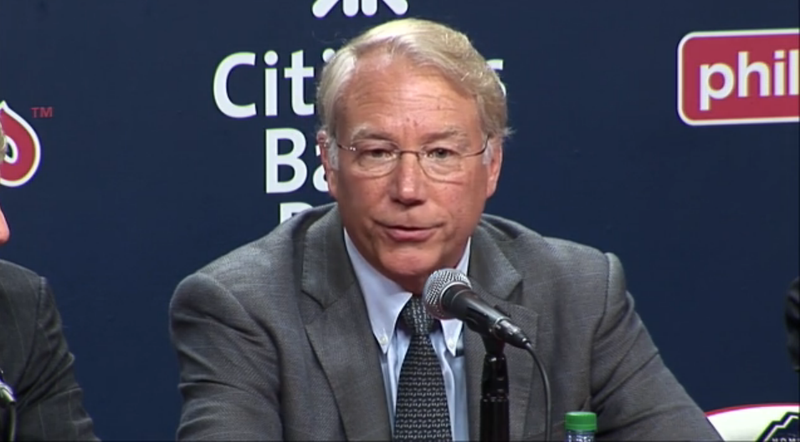 The announcement today the Phillies made was the one expected: Andy MacPhail will indeed become president of the Philadelphia Phillies.   However, the move will not occur on the timeline that we might have expected.   John Middleton, speaking on behalf of the Phillies ownership group, announced in a Monday afternoon press conference that MacPhail will assume the role of club president following the 2015 season.

Pat Gillick, who took control of the Phillies when David Montgomery took a health leave in August of the 2014 season, will maintain control through the 2015 season.  MacPhail will be working alongside Gillick, as will general manager Ruben Amaro, Jr.   Amaro was not present for the press conference; only MacPhail, Middleton, and Gillick.

Middleton called MacPhail the perfect candidate, one with  a "rare combination of old school experience and new age thinking".  Middleton spoke of MacPhail's experience in the "old school" way in building winning teams in Minnesota and in Chicago, as well as use of Sabermetrics in Baltimore.  MacPhail said that he will leave "no stone unturned" on the topic of the use of Sabermetrics

MacPhail said that his three main goals this season were to read, to watch, and to listen as the 2015 season concludes.   MacPhail said he would "be a fool" to ignore the gifts that outgoing president Pat Gillick brings to the table during their time working together.

In the time before MacPhail takes over, Gillick and general manager Ruben Amaro Jr. will make all decisions, including trades at the 2015 trade deadline.