One of the key players from the 2008 World Series Championship team, Pat Burrell, has been inducted as the 37th member of the Philadelphia Phillies' Wall of Fame.

Former manager of his, and last year's recipient of the honor, Charlie Manuel, introduced Burrell before the fans, as well as the previously inducted members, in attendance at Citizens Bank Park on Friday evening. 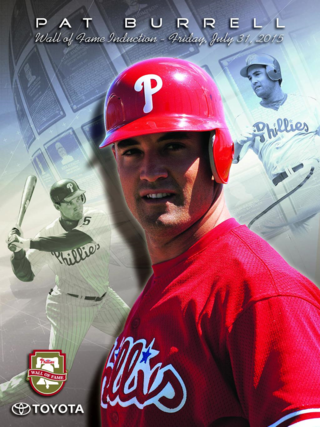 Burrell, 38, was the first overall pick in the 1998 amateur draft out of the University of Miami. He made his major league debut on May 24, 2000 against the Houston Astros, and never looked back.

In nine seasons in red pinstripes, Burrell played in 1,306 games, 1,185 of which were in his iconic position in left field.

Back in late February, when it was announced that Burrell would be inducted after receiving the most Phillies.com fan votes, he shared his appreciation and gratitude:

"It's a tremendous honor and privilege to be added to the Wall next to Philly's all-time greats. My family and I couldn't be more grateful for the support from fans. Their votes are the reason that I will now be enshrined in Phillies history."

Earlier today, our own Kevin Durso recounted Burrell's contributions from the 2008 playoff run:

In the 2008 World Series run, Burrell had plenty of memorable moments. He homered twice in the deciding Game 4 of the NLDS against the Brewers. In Game 1 of the NLCS against the Dodgers, Burrell belted the go-ahead and eventual winning home run.

In the deciding Game 5 of the 2008 World Series, Burrell led off the seventh inning with a double. He was removed for a pinch-runner, Eric Bruntlett, who would come around to score the winning run.

After 2008, the Phillies are Burrell chose to part ways. Long-time Seattle Mariner Raul Ibanez was
brought in as his replacement, and was an immediate impactful player for the franchise's quest to repeat as World Champions. 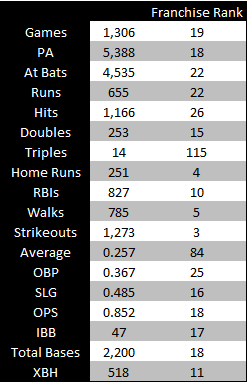 Burrell's numbers declined gradually in the three years he played outside of Philadelphia, almost equally split between the Tampa Bay Rays (146 games) and the San Francisco Giants (188).

With the Giants in 2010, Burrell won his second World Series championship. He hit .211/.318/.316 against the Phillies in the National League Championship Series that year, which lasted six games.

Burrell returned to Philadelphia on a one-day contract to retire as a Phillie on May 19, 2012.

The Wall of Fame induction ceremony is the first major event of Toyota Alumni Weekend, which has become a staple, mid-summer tradition for the organization.

Tomorrow evening, Burrell and 40-50 other alumni will take part in Toyota Phillies Alumni Night. According to Philly.com, the annual Garry Maddox BBQ Challenge will not be held this Saturday for the first time since 2001, because of the event not generating 'robust proceeds for the charity' in recent years.

All fans who attend Sunday's series finale matinee will receive a 13" x 26" Toyota Phillies Wall of Fame Fathead, which includes Burrell and the following four players who are also on the wall: Steve Carlton, Darren Daulton, Dick Allen and Mike Schmidt.

Since retiring, Burrell has served as a scout with the San Francisco Giants. His English Bulldog iconic to the parade on October 31, 2008, Elvis, unfortunately passed away in September of 2014.

Burrell is the first player from the 2008 World Series Champion team to be inducted. Harry Kalas (broadcaster) and Charlie Manuel (manager) were inducted in 2009 and 2014 respectively. Expect many more players from the team to be enshrined in the future, including the recently traded Jimmy Rollins and Cole Hamels.