Eagles Flyers Phillies Sixers About Us Write For Us
Buchanan, Phillies look for two in a row on Wall of Fame Night
Former slugging outfielder Pat Burrell inducted into Phillies Wall of Fame 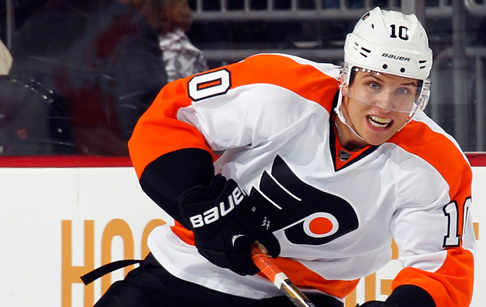 Will an off-season or in-season extension for impending RFA center/winger Brayden Schenn follow next? Probably not, said Flyers general manager Ron Hextall during a conference call with reporters on Thursday.

"I'm not sure there will be a push," Hextall said. "I've spoken with Brayden's agent a number of times over the summer about different things and the subject's never come up. It's not something we're in a hurry to do and I'm assuming they feel the same way."

Schenn, who turns 24 on August 22, will enter the second and final year of a two-season bridge contract signed in 2014.  His current deal carries a $2.5 million cap hit.  The 2015-16 season will be his fifth full year of pro hockey. It is not an exaggeration to say the upcoming campaign will be crucial to his future in Philadelphia.

Schenn has made progress over the course of his three NHL seasons to date. It hasn't been a fast process from year to year, and he still has yet to show the sort of consistency the team hopes to see him develop. He's headed in the right direction, but has not reached the destination nearly as soon as some folks hoped when the Flyers acquired him as a crucial piece of their long-term succession plan for Mike Richards and Jeff Carter.

One of the biggest conundrums that teams in all sports face is knowing when to be patient through a young player's learning curve. Progress isn't always rapid from year to year, and there are sometimes seeming backward steps along the way.

Charting improvement isn't always a straight upward arrow from a player's first training camp to the point where he reaches his maximum potential. On the other hand, many players never reach the full potential that was initially envisioned for them. It's tough to know when a player is still in his early 20s whether what you see now is the most you're likely to get in years to come.

As a player whose primary value comes from his point production, this has been Brayden Schenn's NHL-level statistical evolution to date:

As he nears age 24, Schenn has a 20-goal season under his belt and flirting last year with his first 50-point season. There have been stretches of games where he has looked like a burgeoning heart-and-soul player who wins key puck battles and produces points while also playing a bit of a mean streak in his game.

On the other hand, Schenn is still very inconsistent. He's prone to lengthy droughts in his offensive production and other parts of his game are still works in progress.

For whatever reason, he did not particularly click offensively during a lengthy stretch on a five-on-five line with Claude Giroux and Jakub Voracek during the 2014-15 season. He had his two most productive stretches while playing a wing (left wing early in the season,right wing near the end) on a line with Couturier. While Schenn was not a disaster as Scott Hartnell's replacement on the Flyers top power play unit --  7 power play goals, 19 power play points compared to Hartnell's 9 PPG and 20 PPP in 20113-14 -- he also did not especially stand out.

Schenn has become a more physical player from his rookie year to his fourth year but could still win battles on a more frequent basis. He is an average skater. He creates the occasional scoring chance for himself or for linemates but is not not exceptionally creative in finding space. When slumping, Schenn still gets impatient with the puck on his stick and puts it in low-percentage areas.

On the defensive side of the puck, Schenn was a below-average NHL player during his rookie year of 2011-12. He has improved over his career to date and is now at least an average for a player in a second-line role. There is still further improvement needed to get Schenn to the point where he is a two-way asset in other areas of the ice even when he's in an offensive slump. His forechecking game has improved and, at times. he can be effective in forcing turnovers and creating room for linemates but greater consistency is needed.

Hextall has not entirely ruled out the possibility of signing Schenn during the 2015-16 season to a preemptive extension.

"It's not that we wouldn't like to get him signed," said Hextall. "Probably [want to] get him another year to see where things flesh out. I don't anticipate signing Brayden, which never means that you're not going to but it's not something we'll actively pursue. We'll wait and see how the year goes and probably talk at some point during the year or next summer."

In other words, the upcoming season will go a long way toward setting Schenn's monetary value on his next contract but will also determine whether he will continue to be counted on as part of the core group around which the team is building. He is rapidly reaching the age and development level at which what the Flyers see next season is more or less what they can expect to get (assuming good health) as he reaches what should be the prime years of his NHL career.