Eagles Flyers Phillies Sixers About Us Write For Us
Previous month:
June 2015
Next month:
August 2015 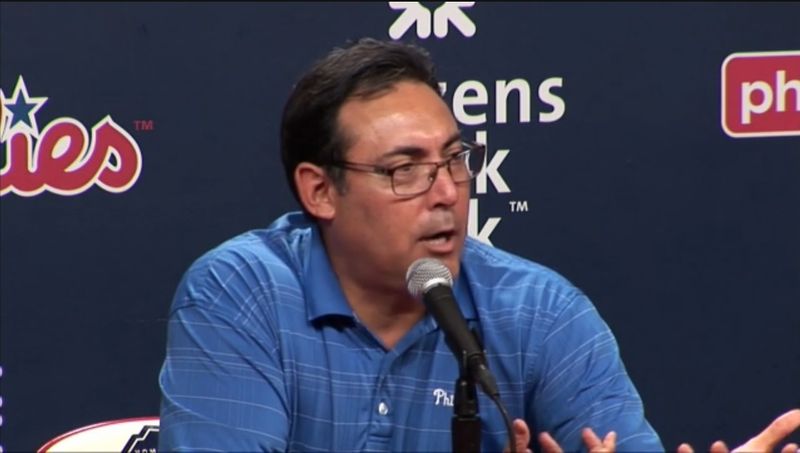 Here are some highlights from Ruben Amaro Jr.'s 1:30 press conference announcing the Cole Hamels trade.  This is a collection of tweets from various media outlets because it is hard to type that fast.

RAJ on Cole trade: "We got a very good package of players to propel us into the future"

RAJ on trade: View players as premium prospects. Risk is to see how they will develop here in Philly.

Ruben going through Alfaro ankle injury. They felt comfortable going forward with him in trade. On his way to Phillly to have docs look.

Amaro: 'we were looking for depth and quality and we got both.' #Phillies

Ruben: 'we maximized our leverage'

Nick Williams and Jake Thompson are both headed to @ReadingFightins according to #Phillies GM Ruben Amaro Jr. #MiLB

Amaro- "I've had to make a personal adjustment" on the valuation of prospects in baseball.

Amaro's phone rang towards the end of the press conference.  While he did not stop to take the call, Amaro alluded that he was waiting to hear from assistant general manager Scott Proferock.  The deadline is in two hours, so stay tuned.

Cole Hamels was caught in traffic, so he did not make his anticipated 2:00 p.m. start, but Hamels is speaking about his trade to the Texas Rangers. 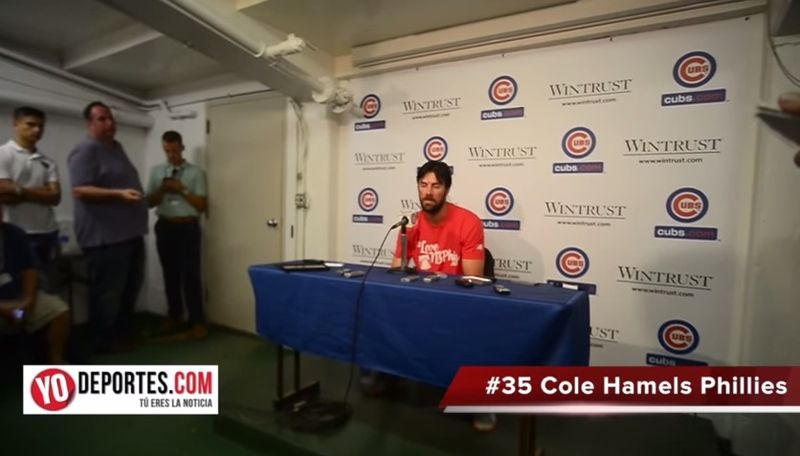 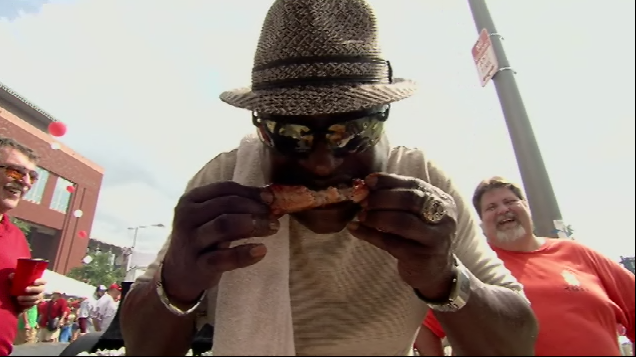 Gary Matthews served as a judge during the event

One of the staples of alumni weekend is no more.   The Garry Maddox rib challenge, an annual event on Saturday of alumni weekend outside of Citizens Bank Park has been canceled.  The reason for the cancellation: it simply was not making enough money.

Replying to a query, Maddox associate Kerry Ann Williams called the challenge "a great event, and we heard from a lot of supporters, participants, and attendees after it was canceled. Unfortunately, it doesn't always generate robust proceeds for the charity, which is the main goal of the event."

The event included many Philadelphia Phillies alumni, local media, and other celebrities.

It appears that the event was scheduled to happen, as the CBS Radio sponsors included new acquisitions WXTU and AMP 96.5, the CBS version of Wired 96.5.  CBS Radio acquired the stations just in November.   The event has a Facebook page, a Twitter page and a website.

A trade which seemed to take years to finalize, has reportedly been made official. According to ESPN's Jayson Stark, the Cole Hamels and Jake Diekman deal, sending them to the Texas Rangers, is 'finally official'.

Remember that Cole Hamels deal you thought got done like 38 hours ago? Finally official. He's starting for #Rangers tomorrow.

Hamels is slated to make his Rangers debut Saturday evening. He will oppose veteran right hander Tim Hudson and the San Francisco Giants (56-45), who trail the Los Angeles Dodgers (57-45) by a half-game in the National League West division.

Rangers' beat writer for the Fort Worth Star-Telegram, Jeff Wilson, reports that Hamels, along with Diekman, will arrive at Globe Life Park in Arlington later today.

Plan is for Cole Hamels to start for #Rangers on Saturday. He and Jake Diekman will arrive to DFW/Globe Life Park later today.

Wilson later added that Hamels, 31, will take Harrison's spot in the rotation and that 23-year-old southpaw Alex Claudio would likely be optioned to make room for Diekman.

Hamels has one career appearance at Globe Life, which occurred on June 28, 2008. He earned a winning decision, allowing four runs on six hits and two walks over seven innings on the mound.

While Diekman will switch from wearing No. 63 in Philadelphia to No. 41 with the Rangers, Hamels will continue to wear No. 35 according to John Blake, Executive Vice President of Communications for the Texas Rangers. That number with the Rangers previously belonged to 26-year-old right hander Phil Klein.

The 2008 World Series Most Valuable Player will speak to the Phillies' media one last time today at 2 p.m. EST in a 'send off' news conference, according to Comcast SportsNet's Jim Salisbury. General manager Ruben Amaro Jr. will speak at 1:30 pm.

Update (11:47am): According to ESPN's Buster Olney, the Blue Jays are talking to the Phillies about Revere, but aren't interested at the current asking price. The Phils are still in discussions with another team that is currently unknown.

Addendum: The Blue Jays aren't interested in Ben Revere AT CURRENT ASKING PRICE; nothing current. PHI talking to some other team.

Original story: The trade deadline is inching closer and Ben Revere seems to be the next guy on the move for the Phillies. In the last few hours, Revere had been linked to the Orioles, but Baltimore instead went on to trade for Gerardo Parra, parting with their eighth best prospect, pitcher Zach Davies, in the process.

With the Orioles now out of the question for the Phillies outfielder, the Blue Jays are apparently in the hunt for Revere, which is a new development.

Sources say talks to send Ben Revere to Toronto are heating up. #phillies

The Blue Jays have already added Troy Tulowitzki and David Price this week. Revere could be next. Currently, the Jays outfield consists of Jose Bautista, Kevin Pillar and Chris Colabello. The Jays hoped Michael Saunders would be their left fielder this season, but a knee injury has prevented that from happened.

If Revere gets dealt, the Phillies could realistically give outfield prospect Aaron Altherr an extended look. In 34 games at Triple-A, he's hitting .294 with six doubles, six homers, 25 runs scored and 29 RBI's.

With under eight hours until the non-waiver trade deadline, talks are heating up despite plenty of big names already being moved. Troy Tulowitzki is a Blue Jay, Jonthan Papelbon is a National, Carlos Gomez is an Astro, Cole Hamels is a Ranger, Johnny Cueto is a Royal, Dustin Ackley is a Yankee, Shane Victorino and David Murphy are Angels.

One club looking to make some moves to try and catch the Yankees is the Orioles. At 51-50, the Orioles are tied with Toronto for second in the AL East and the Blue Jays have improved mightily with the additions of Tulo and now David Price. The O's find themselves six games back in the division and just two games out of the Wild Card. After losing Nelson Cruz in the offseason, the Orioles haven't had great production from their outfielders, with the exception of Adam Jones. According to Fox Sports Ken Rosenthal, Baltimore is in talks with Milwaukee and the Phillies about both Gerardo Parra and Ben Revere, with hopes of landing both of them.

Sources: #Orioles talking about getting both #Brewers’ Parra and #Phillies’ Revere and sending reliever Tommy Hunter to #Cubs.

Revere, 27, came to the Phillies in a trade with the Twins that saw Vance Worley and pitching prospect Trevor May go to Minnesota. In three seasons with the Phillies, he has a .303 average, swiping 95 bases in that span. This season, he's slashing .298/.334/.374 with 24 steals. He's split time between left field and center with the addition of Rule-5 selection Odubel Herrera.

Gerardo Parra, 28, would be also be nice pickup for Baltimore as well. He's hitting .328 with 24 doubles, nine homers and 31 RBI's this season for the Brewers.

Braves starter Shelby Miller came into tonight's game in Philadelphia with a 0.84 ERA against the Phillies this season over three starts. Carlos Ruiz, playing in his 1,000th career game, gave the Phils the lead in the fourth and the bullpen hurled zero's for the final four frames, sealing the 4-1 win. In his first start since July 1st, Aaron Harang pitched well, tossing five innings of one-run ball, snapping a personal eight-game losing streak. The teams combined for 24 hits with Braves left-fielder Adonis Garcia as the only hitless batter. The Phillies are now 10-2 since the All-Star Break, tied with the Giants for the best record in that span. 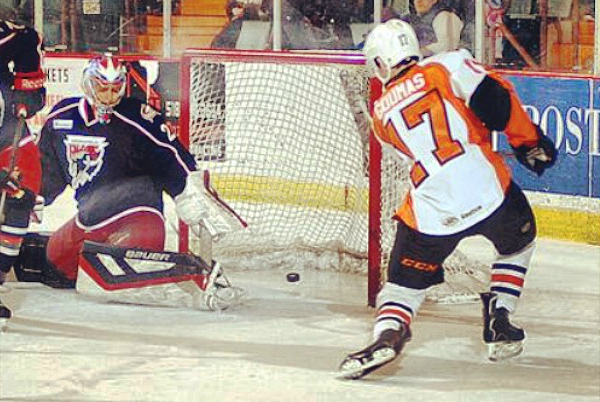 Kevin Goumas, the 23-year-old forward who made his debut with the Adirondack Phantoms in 2014, is set to return for another season. Goumas signed a one-year AHL deal with the Phantoms, keeping him in the Flyers system.

Goumas scored six goals and added 11 assists in 63 games for the Lehigh Valley Phantoms last season, his first full professional season. Goumas was signed from the University of New Hampshire in 2014.

The trade that did not go through yesterday between the New York Mets and the Milwaukee Brewers got a good deal of attention.  Partially it was because of Wilmer Flores crying at second base that he got traded.   But the bigger news was that the trade never went through.  Widely reported as "medical concerns" about star Carlos Gomez, the Mets backed out of the deal.  But the Astros apparently are happy to take Gomez.

So if the Houston Astros are okay with Gomez's medical reports, what was the problem?  Some have speculated that Mets ownership used the injury as an excuse to avoid paying what it cost to bring in the bat, which the Mets badly need.  And Astros fans are happy:

I'm beyond fired up with acquisition of Carlos Gomez and Mike Fiers. Thanks for being cheap, Mets. #Astros

Should the Mets fail to get a bat, their fan base may go berserk.

With trade not yet official, Jake Diekman is in Phillies uniform, headed to bullpen

Jake Diekman is on the field and in uniform for the #Phillies. He is reportedly part of the Hamels trade to the Rangers.

This led some to worry that the trade with the Rangers was in doubht.  However, Jerry Crasnick adds: there is nothing to worry about:

A source says final details in Hamels trade are taking some time to resolve. Nothing to be alarmed about. #phillies #rangers

It would not be the first time today that an agreed-to-trade player was in uniform.

Michael Morse, who was in a three-team deal between the Miami Marlins, Los Angeles Dodgers, and Atlanta Braves, actually pinch-hit in today's Marlins-Nationals match up.  The Phillies probably will not use Diekman unless they are in a situation where they have no choice.   They may need to, as Aaron Harang skipped a rehab start to pitch tonight against the Braves.