What does magician Hextall have up his sleeve next? 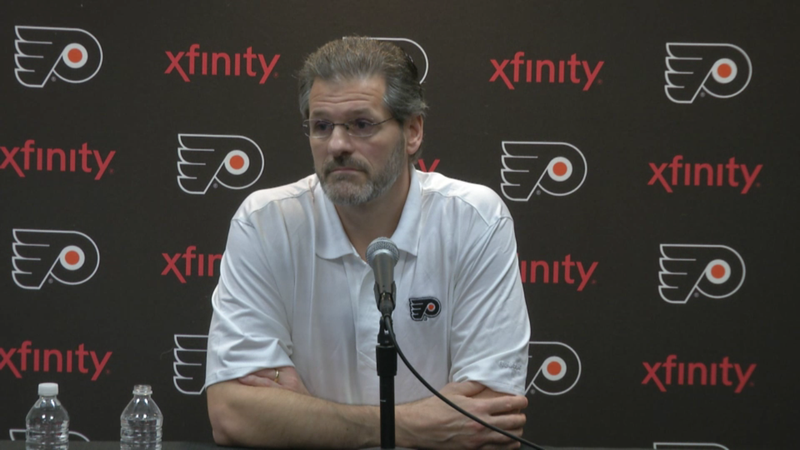 In just a little more than four months, Flyers GM Ron Hextall has gone from your average, ordinary general manager to a magician at work.

He traded 40-year-old veteran Kimmo Timonen, who had not played all season and had two months left in his playing career, for Chicago’s second-round pick. He turned Braydon Coburn into a first-round pick, a third-round pick and Radko Gudas in a trade with Tampa Bay. He traded Nick Grossmann to Arizona for Sam Gagner while making Chris Pronger’s contract disappear. And then, he did the impossible, acquiring a third-round pick for Zac Rinaldo.

In the meantime, Hextall also retained forwards Chris VandeVelde and Ryan White by signing them to contract extensions. He extended a qualifying offer to Michael Del Zotto. He used the Flyers first-round pick to snag a stud defenseman in Ivan Provorov. He took the first-round pick from Tampa and the second-round pick from Chicago and moved up to draft Travis Konecny. And he opened free agency by signing Michal Neuvirth.

So what does Hextall have next up his sleeve?

Still on Hextall’s checklist are trying to acquire a scoring forward – if the Flyers don’t view Gagner as that player – and potentially free up more cap space.

How can Hextall continue to wow people with his magic? It would be a magic trick if Hextall were able to unload one of the contracts that weighs down the Flyers cap. The three most notable deals are to Vincent Lecavalier, Andrew MacDonald and R.J. Umberger.

Lecavalier was signed by Paul Holmgren for five years, $22.5 million prior to the 2013-14 season. Lecavalier has scored 28 goals and added 29 assists and a minus-23 in 126 games since joining the Flyers. Hextall has been actively trying to get rid of the contract in previous years.

Lecavalier received a $2 million bonus on Wednesday, which could be what the Flyers were waiting for before dealing him.

MacDonald was acquired at the trade deadline in March 2014 and did help the Flyers complete a comeback to make the playoffs. But in April, he signed a six-year, $30 million contract extension and missed much of the first season of that contract with various injuries. In 77 games with the Flyers, MacDonald has two goals and 14 assists and is minus-8.

Umberger was acquired from Columbus in the offseason a year ago, on June 23, for Scott Hartnell. In his first season since returning to the Flyers, Umberger played in 67 games, scoring nine goals and adding six assists and was a minus-9. Umberger still has two years remaining on his contract.

For the Flyers to complete the task of adding the scoring winger they desire, a trade might be necessary. It would certainly help if they could move one of these contracts.

If they did, it would be just the latest magic trick from Ron Hextall.