Kudos to the Phillies front office 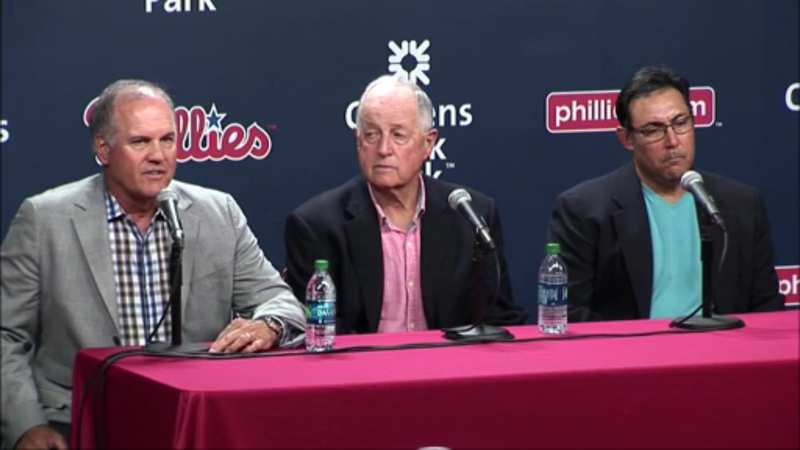 It’s something I never thought I’d say, but after watching the body of work that came complete Wednesday, I have to say it.

The Phillies front office did an excellent job at the trade deadline and beyond.

Forget who had the primary say or who was orchestrating deals. The Phillies traded five regulars and received 10 prospects back in return.

The franchise is in a better position for the future, for the rebuild that is already in progress, because of these moves.

What is more impressive is that the Phillies entered 2015 strapped by massive contracts: Cole Hamels, Cliff Lee, Chase Utley, Ryan Howard, Jonathan Papelbon, Carlos Ruiz. Three of those players remain. Lee is not playing at all this season and likely heading toward retirement.

The Phillies can breathe easier knowing that they have a need for Howard and Ruiz in the remainder of their contracts while waiting for the prospects at those positions to get to the majors, unlike Utley, Hamels and Papelbon who were essentially blocking major-league ready players.

What is even better is the returns for these players. The Hamels trade appears to be the king’s ransom: an outfielder and two pitchers with huge potential to make it. Papelbon and Utley got you, well, let’s be honest, more than you expected. Ben Revere was somehow worth two prospects.

The chances that every player the Phillies got in return from these trades will turn into a major-league pieces is slim to none.

I am not giving the Phillies front office praise for acquiring prospects in bulk. I’m praising them for essentially taking on a challenge of quickly fixing the franchise, the right way, and doing about the best job they could have given all of the circumstances.

Essentially, in July, the Phillies were without a manager and lacking even further in sense of direction. In the last month, they have a winning record – 17-11, albeit while currently riding a 1-6 stretch – while improving the outlook of this franchise two-fold.

It all happened quickly, but the Phillies managed to, through the draft, international signing and trade, improve their farm system overnight to suddenly have a somewhat positive outlook, a reason to look forward to what is to come, not the fact that they are stuck in the past.

With only two members of the 2008 World Series team left, and essentially every big-name player brought on to try to win another in between now gone, the past is gone with it.

It is time to look into the future. The Phillies finally realized it. And soon enough, fans will see the future become the present and the next memorable era of Phillies baseball dawning in Philadelphia.