Eagles Flyers Phillies Sixers About Us Write For Us
Previous month:
July 2015
Next month:
September 2015

Zach Links of MLBTR reports that the Phillies claimed Rockies southpaw Ken Roberts off waivers. In the same report, Roberts was optioned to Triple-A Lehigh Valley.

Roberts has not had the greatest season for Triple-A Albuquerque which is known as a hitters atmosphere with a 5.12 ERA but has a 28-4 K/BB ratio. His FIP was also 3.43 which suggests bad luck for Roberts.

Despite the struggles, Roberts had a brief stint in the majors for the Rockies where over nine games he struck out five and walked two with a 5.79 ERA. Again the FIP was much lower at 3.01 for another organization not known to be the best environment for pitchers.

We'll see if he gets a look in September in the majors for it seems like Roberts is much better than his ERA would suggest.

The Eagles have until Tuesday to trim the roster from 90 to 75. The first round of cuts has begun as seven players were released from the roster. 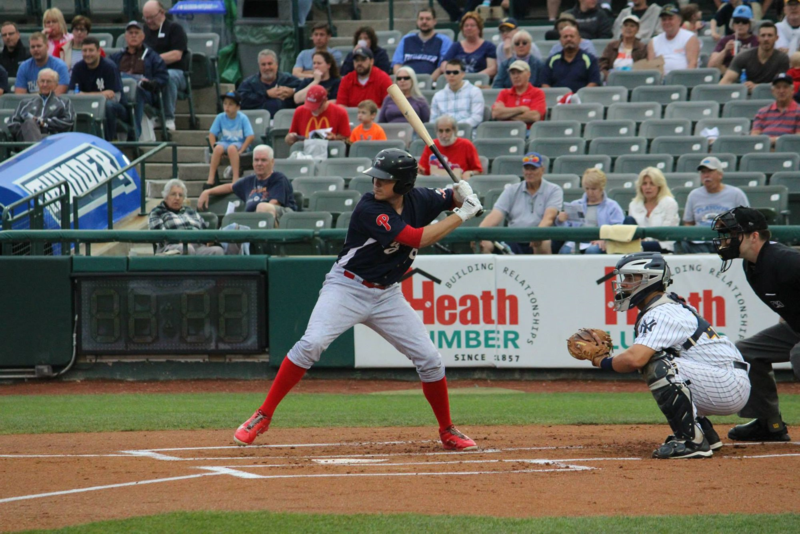 At 76-56, the Double-A Reading Fightin Phils are closing in on the playoffs, three games ahead of second place Binghamton in the Eastern Division of the Eastern League. While the team has lost prospects Roman Quinn, Cam Perkins and most recently Nick Williams, they've managed to maintain a ton of offensive firepower through the entire season. Having a dominant pitching staff helps too. Reading first baseman Brock Stassi, one of the most consistent pieces of their offense, was named Eastern League MVP while manager Dusty Wathan took home Manager of the Year honors.

This season for the Fightin Phils, he's slashing .312/.399./480 with 32 doubles, one triple, 14 homers, 88 RBI's and 73 runs scored. He's also demonstrated really good plate discipline, walking 72 times and striking out 60 in 446 at-bats this season. He has 39 multi-hit games this season and also got the win as a pitcher on June 11th, striking out three in an 18-inning victory against Altoona. Stassi leads the league in RBI's, doubles, total bases (211) and OPS (.882). He ranks second in on-base percentage, walks, extra-base hits (46) and runs scored. Stassi was also named to the Eastern League end of the season All-Star Team and he started this year's All-Star Game at first base for Reading.

Meanwhile, Fightin Phils manager Dusty Wathan joins Gary Varsho (2000), Al LeBeouf (1997), Bill Dancy (1995 & 1983), and Bob Wellman (1975) as Reading Manager of the Year recipients. Wathan is in his fourth season with Reading, compiling a 280-277 record in that span, including a playoff appearance in 2012. Wathan has spent time managing in the Phillies organization since 2008, when he began as the manager for the Phils short season affiliate in Williamsport. He led Class 'A' Lakewood to the 2009 Championship. Over his eight seasons of managing, he's 538-507. Prior to managing, Wathan had a 14-year playing career. He played with six different teams during his career, reaching the big leagues with Kansas City in 2002.

Jesse Biddle placed on the DL with a shoulder strain

Jesse Biddle's rocky Phillies career has taken another U-Turn. The 2010 first-round selection has been placed on the disabled list with a strain in his left shoulder that will likely end his 2015 season.

Jesse Biddle has been placed on the DL (shoulder strain) with triple-A Lehigh Valley.

Biddle has struggled mightily with Lehigh Valley, going 2-4, with a 6.25 ERA in nine games, all starts. In his last outing on Thursday the 27th, the southpaw gave up five runs on 10 hits in just 4 2/3 innings of work. Combined between Double-A and Triple-A this season, Biddle is 9-6 with an ERA of 4.95.

Once considered a future ace, Biddle will need to turn things around fairly quickly, once healthy, as he has been surpassed on the depth chart by prospects Zach Eflin, Aaron Nola and Nick Pivetta. With Adam Morgan pitching well and recently acquired Jake Thompson, Jerad Eickoff, and Alec Asher on the rise, Biddle's performance when he returns may decide his future with the Phillies organization. 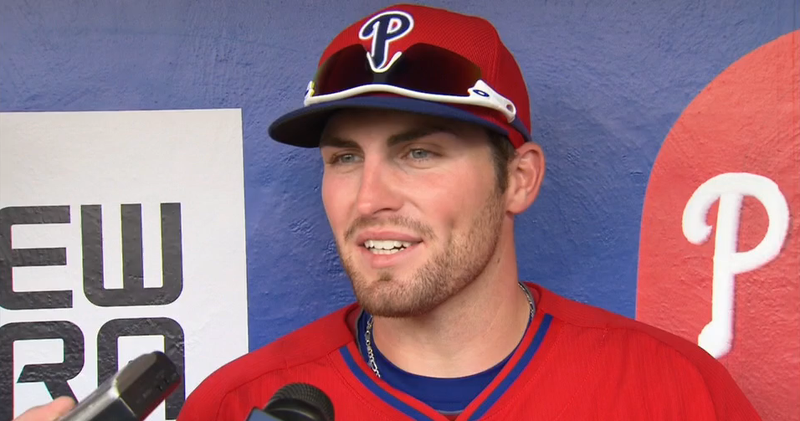 Philadelphia, PA - This afternoon in the series finale matinee against the San Diego Padres (62-67), right hander Alec Asher will be making his major league debut for the Philadelphia Phillies (52-78) as they seek their fifth series sweep of the season.

Asher, 23, is the second return from the Cole Hamels and Jake Diekman trade to the Texas Rangers to make his big-league debut this season. The other, right hander Jerad Eickhoff, has allowed just three earned runs on 11 hits and two walks over 12.0 innings.

"It's awesome. It's a dream come true. I've worked my whole life for this since I was a little boy," said Asher in an interview with reporters prior to Saturday night's game. "It's awesome to finally get here."

Asher had Tommy John surgery at the age of 14, which he has said enabled him to learn early on what it takes to achieve his goals and how to obtain 'a good work ethic'.

The Lakeland, Florida-native continued, commenting on the current state of the team and how he can contribute with just over 30 games remaining in the season.

"There's a lot of young talent on this team. A lot of good guys. You just try to be a part of it and try to do what you can to make the team better."

If the third game of the preseason is the final test for many of the Eagles starters, then they passed with flying colors.

It started with Sam Bradford, but realistically, it was an offensive juggernaut that looks ready to tackle the regular season.

Bradford's early success set the tone for a huge first half for the Eagles, who rolled to a 39-26 win over the Packers.

Bradford wasn't the only player to show his stuff on Saturday night. Here are more observations and analysis from the Eagles big win.

The Philadelphia Eagles had another strong performance in Week 3 of the preseason against the Green Bay Packers.

The Eagles returned to Lambeau Field on Saturday night for the first time since suffering a 53-20 loss to the Packers in week 11 of the 2014 NFL season. If they wanted revenge, they got it.

A near-perfect night for Sam Bradford helped the Eagles get rolling early and never look back in a 39-26 win over the Packers.

Philadelphia, PA - The first runs of the night were scored by the Philadelphia Phillies (52-78) in the bottom of the second inning. Behind timely hitting and an effective bullpen, the Phillies went on to hold the lead for the rest of the evening against the San Diego Padres (62-67), as rookie left hander Adam Morgan earned his 5th career victory.

Following a lead-off single by first baseman Ryan Howard in the bottom of the second inning, second baseman Darnell Sweeney drove a 91 mph, two-seam fastball into the center field stands for the second home run of his major league career.

Sweeney, 24, was acquired on August 19 in the trade that sent perennial Phillies' second baseman Chase Utley to the Los Angeles Dodgers.

Tonight's victory for the Phillies secured their seventh consecutive win against the Padres at Citizens Bank Park, and their 12th series victory of the 2015 season.

Let’s be honest, this is the only preseason game that anyone really, truly, honestly looks forward to.  The third preseason game, by and large, will tell you—often for the first time—the identity of your football team.  This has never been truer than for the 2015 Philadelphia Eagles.

The offense is to be captained by a new quarterback. That quarterback hasn’t played a snap in a regular season NFL game since October 20th, 2013. The offense will be paced by two new running backs.  One of those running backs was the NFL’s leading rusher last year: managing the distinction while accumulating nearly 500 offensive touches. The other is a big, but swift, bodied talent who has played only one (out of five) injury-free, sixteen-game season. The offensive line is replacing both guards: one of whom was a 2015 Pro Bowler.

The defense is replacing 75% of the starters in the secondary. One outside linebacker—replacing an all time great Eagle in Trent Cole—will step into a starting role just a couple years after being labeled, by most fans, a bust. All three of the starting inside linebackers missed significant time, or the full season, last season.

The good news is that the dress rehearsal is here. The guys above are going to play because, quite simply, the coaches are out of “wait-and-see” time. This week, we see the plan. This week, we see the starters.  This week, we see if the team can contend against the NFC’s elite. The Eagles are potentially primed for huge things this season. If the following things look good, get ready for something special in 2015:

Sam Bradford will be making his second appearance in Midnight Green during live action. The goal for him last week, against the Ravens, was to simply stay healthy. Against the Packers, it is time for him to start airing it out. He will, presumably, have some plays—with moving pockets and the like—designed to get him mobile. It will be interesting to see if he is more accurate than last week. With confidence, accuracy will come. If he looks good tomorrow evening, get ready for sports radio in Philly to come strong with fan Super Bowl predictions next week.

The inside linebackers. Last week, playing with Emmanuel Acho & Brad Jones, the defensive front seven gave up large chunks of rushing yards to Baltimore’s starting offense. Can the athletic pair of Mychal Kendricks & Kiko Alonso step it up and shut down Eddie Lacy? If yes, see above.

Jordy Nelson isn’t going to be playing this year: having blown out his ACL last week in practice. Aaron Rodgers will be sitting this one out: having already played over a half of football this preseason. Still, the Packers have no shortage of offensive playmakers/weapons: Randall Cobb, Davante Adams, rookie Ty Montgomery, Richard Rodgers, etc. This secondary will be tested for the first time against a starting caliber WR corps & elite QB. Remember, they missed Donte Moncrief & TY Hilton in Week 1: Breshad Perriman in Week 2. Against one of the best top-to-bottom rosters in the NFL, we'll see how this Eagles team matches up.

Philadelphia, PA - Having won six consecutive games against the San Diego Padres (62-66) at Citizens Bank Park, the Philadelphia Phillies (51-78) will send rookie southpaw Adam Morgan to the mound for his 12th career start with their sights set on a series victory.