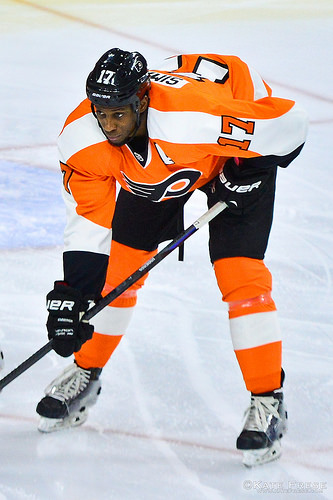 The first period began rather slowly. The teams combined for just one shot through the first six plus minutes of action. The Flyers began to push the pace which lead to a Rangers penalty when Raphael Diaz was whistled for holding at 7:12.

Just over a minute into the man advantage, Medvedev recorded his first NHL goal. Medvedev took a pass from Scott Laughton and blasted a shot past Ranger goalie Magnus Hellberg.

The Flyers would get a second man adavantage later in the period but where unable to put one in. New York would also get one chance late in the stanza. They were unable to capitalize on it.

Hellberg stopped eight of nine shots while Mason turned aside all five shots he faced to preserve the 1-0 lead at the break.

The second period was a lot more frantic. The Flyers opened the scoring just 3:56 in as Brayden Schenn picked his second goal of the preseason on the powerplay to make it 2-0. Schenn walked to the slot and beat Hellberg clean.

The Rangers made a push and got it 2-1 at the 7:03 mark of the period when Oscar Lindberg recorded his second goal of the preseason. Just over a minute later, the Rangers tied it.

Mat Bodie got Mason moving as he came in on the rush and beat the Flyer net minder at 8:20 making it 2-2.

It didn't stay tied long as Sam Gagner picked up his first of the preseason and first as a Flyer at 9:40. Gagner took a pass from Wayne Simmonds and buried past new Rangers goalie Antti Raanta for a 3-2 lead.

Shayne Gostisbehere made it 4-2 just 2:11 into the third. He fired a shot from the point that beat Raanta high to the glove side.

Gostisbehere would score again in the late stages of the third on the power play to give the Flyers a 5-2 lead. With two minutes left New York cut it down to 5-3 as Bodie picked up his second of the night. New York would get no closer.