Eagles Flyers Phillies Sixers About Us Write For Us
Previous month:
August 2015
Next month:
October 2015

Phils storm back to beat Mets, 7-5, in lengthy game

Philadelphia, PA--Twenty minutes into the top of the first inning, it certainly didn't look like the Phillies were going to win the game.

Phillies starter Alec Asher departed Wednesday night's loss after 43 pitches and five earned runs ceded to the New York Mets (89-69). He retired just two Mets in a dreadfully long top of the first that seemed to have no end in sight. Asher allowed a three-run shot to Daniel Murphy quickly followed by a two-run blast by Michael Conforto, and that was it for him.

But the Phillies' offense, fueled by singles and wild pitches by Mets relievers, came back by the sixth inning, taking a 6-5 lead and going on to win 7-5 for a series win against the division champions.

One point of concern with De Fratus' outing was his hitting the scorching Yoenis Cespedes on the left hand in the third (though the call was originally a foul ball, the Mets successfully challenged it and the call was overturned.) After Mets fans held their collective breath, it was finally announced that Yo's X-ray had come back negative, as he was only diagnosed with contusions on two fingers.

The Phillies got a pair of runs back in the bottom half of the third on a two-run double by Darin Ruf off of Logan Verrett of the Mets, scoring Freddy Galvis and Aaron Altherr to make it a 5-2 ballgame.

Adam Loewen replaced De Fratus with two outs in the fourth, finishing the inning. He pitched 1.0 scoreless innings before giving way to Colton Murray, who finished the fifth.

In the bottom of the fifth, Cody Asche drove in another run for the Phillies on a single to score Odubel Herrera (who was plunked as retaliation for the Phils' hitting Cespedes). With two on and one out, the Mets had pulled Verrett in favor of Erik Goeddel, who induced a pop-out from Darin Ruf. The hit came against Jon Niese, relieving Goeddel, as the Phillies cut it to 5-3.

More apoplexy went down in the bottom of the sixth, as Mets reliever Hansel Robles threw a fastball very near Cameron Rupp's head and was summarily ejected by plate umpire and balk enthusiast Bob Davidson (the pitch was also determined to be a quick pitch). Terry Collins, coming out to argue, was also tossed by Davidson.

Bobby Parnell, in for Robles, completed the walk of Rupp and then walked Chase d'Arnaud to put runners on first and second with one out. A wild pitch moved both runners up, giving Freddy Galvis a chance to tie the game with a single. Galvis delivered, singling to center and moving up to second on the throw home, which was not in time as d'Arnaud scored the tying run, making it 5-5.

Dario Alvarez came on to retire Odubel Herrera and then hit Aaron Altherr, proceeding to give way to Carlos Torres, the Mets' fourth pitcher of the frame. Another wild pitch moved the runners up to second and third with two away for Darin Ruf, and YET ANOTHER scored Galvis from third to give the Phils a 6-5 lead before Ruf struck out to end the excruciatingly long but productive sixth inning.

Jerome Williams pitched an uneventful seventh for the Phils, holding the 6-5 lead for the Phillies. Addison Reed, on for the Mets in a Tony La Russa-like management of relievers, worked around a Brian Bogusevic single to get through the bottom of the frame.

Dalier Hinojosa continued his impressive stretch with the big club, pitching a flawless eighth and lowering his ERA to 0.79 on the season.

Former National Tyler Clippard allowed a leadoff double to Andres Blanco in the bottom of the eighth; Galvis bunted Blanco over on a sac bunt. Another--surprise--wild pitch scored Blanco from third to give the Phillies a 7-5 lead after eight innings.

Ken Giles came in to close out the game for the Phils, pitching a 1-2-3 inning as the Phils prevailed 7-5 on Wednesday night.

Tomorrow's original 7:05 start was moved up to 12:05 due to the impending threat of Hurricane Joaquin, classified as of Wednesday night as a Category III storm. Jerad Eickhoff will start for the Phils against the Mets starter, still TBD.

The New Jersey Devils were 3-1-0 against the Flyers during the 2014-15 season. The trend continued in Wednesday's preseason game between the two teams.

After a solid first period, the Flyers played flat for the remaining two periods, failing to generate any offense on Devils backup Keith Kinkaid.

New Jersey claimed a 4-2 victory over the Flyers in the final preseason home game for the team this season.

Welcome to episode two of the Sports Talk Philly podcast with Brian Startare! Listen below online. Today we have as guests John Clark of Comcast Sports Net and NBC 10, along with Mike Sielski of the Philadelphia Inquirer. Listen to the online stream below!

The NFL is exploring the idea of moving Sunday's Eagles-Redskins game due to the chances that Hurricane Joaquin hits the Washington D.C. area over the weekend.

Coming into Tuesday night's game against the Mets, the Phillies were 2-14 against them and 0-4 against their 42-year-old starting pitcher, Bartolo Colon. Thanks to a three-run blast from Darin Ruf, the Phils defeated Colon for the first time this season, finishing off the game with a 4-3 win. Aaron Altherr contributed with an RBI-single late in the game for some insurance and Ken Giles nailed down the save, but not before allowing two earned runs to cross in the ninth. The win marked the 60th of the season for the Phillies. They were the last Major League Baseball team to reach 60 wins. The Cardinals were the first to do so on July 22nd.

The Phillies and Mets continue their series tonight in Philadelphia. Rookie Alec Asher will look to build upon his best career start last time out against the Marlins while New York will counter with Logan Verrett.

Jackson spent his first first six seasons in Philadelphia after being drafted by the Eagles in the second round of the 2008 NFL Draft.  He had a career year in his last year with the Eagles, catching 82 passes for 1,332 yards with nine touchdown receptions.

The Phillies have moved up the start time for Thursday's series finale against the 2015 National League East division champion New York Mets to 12:05 p.m.

According to a team press release, the game was rescheduled, at the direction of Major League Baseball, due to 'expected inclement weather in the evening'.

Fans holding tickets to Thursday’s game (October 1) may use them for the 12:05 p.m. start or exchange them for complimentary tickets to any remaining Phillies home game this season or any 2016 home game (excluding Opening Day on April 11, 2016). Fans wishing to exchange for 2016 tickets may do so when single game tickets go on sale in February. Exchanges should occur by May 31, 2016.

Gates will open tomorrow starting at 11:05 a.m. The game will still be televised on Comcast SportsNet, as well as aired on 94 WIP FM and 1210 WPHT AM.

This will likely be the first of many changes made to the Phillies' remaining 2015 schedule, barring the path and timing of Hurricane Joaquin. 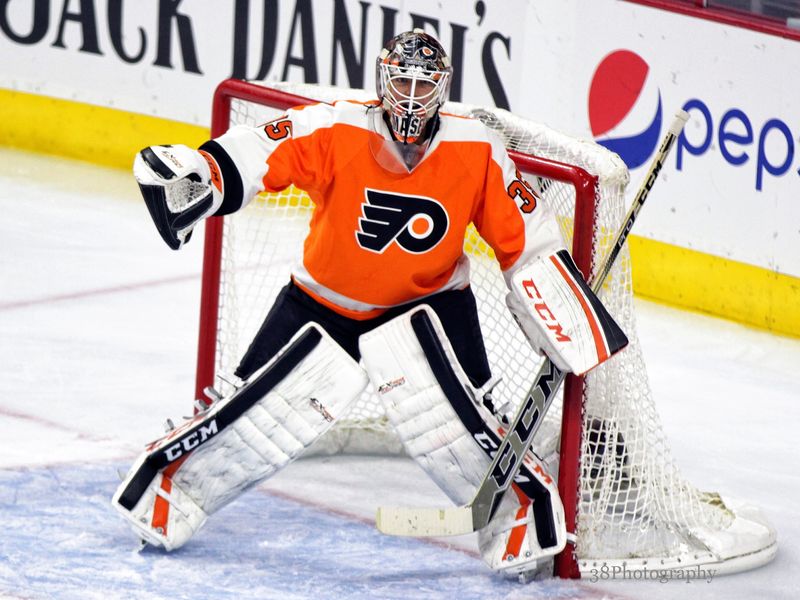 Until this summer, Flyers goaltender Steve Mason spent most of his off-seasons playing as a forward in an Ontario ball hockey league and working out on the ice with a group of friends who play professionally in the National Hockey League and other circuits. Coming off a statistical career year in 2014-15 and having played well for the Flyers on a consistent basis ever since his arrival late in the lockout-shortened 2012-13 season, no one would have faulted Mason if he took an "if it ain't broke, don't fix it" approach to his 2015 off-season.

Mason, however, was not satisfied with last season. Despite his outstanding personal statistics, the team missed the playoffs due primarily to an atrocious road record and sub-par penalty killing. From an individual standpoint, the season saw its share of frustration and injury.

Last summer, Mason sustained a broken right pinky finger in a ball hockey game. While not a serious injury, the injury to a finger on his glove hand temporarily set back his pre-camp preparation timetable. Mason got off to a slow start in October, although the summertime injury was not a significant cause. On a much more concerning note, Mason missed significant time in the middle of the season due to back spasms and a nagging knee problem that eventually required an in-season arthroscopic meniscectomy to remove 60 percent of the meniscus in his right knee.

Mason, who appeared in 61 games for the Flyers during the 2013-14 season before being limited by the knee issue to 51 games last season, set a goal to be physically ready to play 60-plus games even with the team's free agent acquisition of 1B starter-quality backup Michal Neuvirth in July. He also set a personal goal to have the strongest training camp and preseason of his professional career to date.

The Eagles got some good news on the defensive side of things today. Linebacker Kiko Alonso, acquired in the offseason for running back LeSean McCoy, visited with Dr. James Andrews and had arthroscopic surgery performed on his ailing knee. He could return to the field in the next few weeks.

Eagles ILB Kiko Alonso had arthroscopic surgery on his left knee this week and could play as early as in a few weeks, per @caplannfl.

During training camp, Alonso experienced tendinitis in the knee and he exited the Eagles week two matchup against Dallas with what was determined a knee sprain later in the week. He has seven combined tackles and a one-handed interception so far this season.

Meanwhile, in place of Alonso this week against the Jets, rookie Jordan Hicks stepped up and had a huge game. He recorded 10 tackles -- nine solo -- recovered a fumble and grabbed an interception.

Brandon Apter is a contributor for Eagledelphia.com 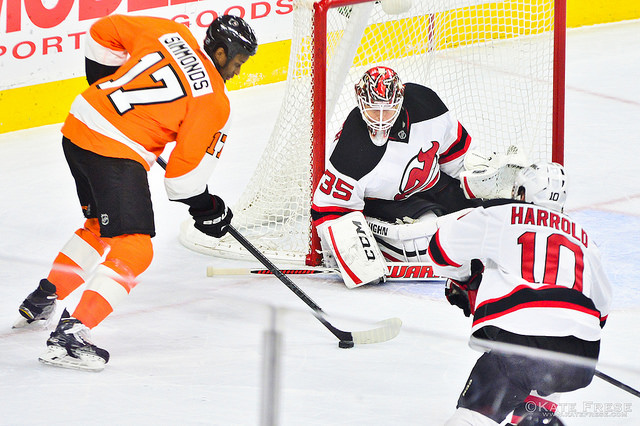 The final decisions on the roster are coming and the Flyers have just two preseason games left to make those decisions and complete preparation for the regular season.

The Flyers are 3-1-1 to this point in the preseason as they return home for the final home game before the home opener on Oct. 12.

The opponent is the New Jersey Devils, a team the Flyers will face twice in the next three days to close out the preseason. The opening face-off from Wells Fargo Center is set for 7 p.m.