Eagles Flyers Phillies Sixers About Us Write For Us
Cousins leaves with injury, Phantoms fall to IceCaps
Between the Pipes: Flyers and Phantoms both lose, 3-on-3, Down Goes Brown 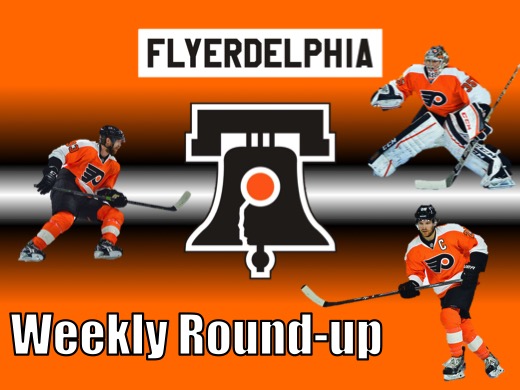 Another week of Flyers hockey is in the books and it was a rough one. Get all caught up with links to everything posted to Flyerdelphia this week.

Here is you Flyerdelphia week in review.

Steve Mason and Henrik Lundqvist dueled it out as the Flyers won a hard-fought battle against the New York Rangers in a shootout. Rob Riches provided coverage - Mason, Lundqvist duel as Flyers beat Rangers in shootout

Rob Riches also had analysis of the game, saying that while the Flyers peppered Lundqvist with chances in a strong offensive game, it was Steve Mason who stole the show - Postgame Perspective: Offense spectacular, but Mason stole the show

The Lehigh Valley Phantoms picked up their first home win of the season, holding on for a 3-1 win over the Providence Bruins. Kevin Durso provided coverage - Stolarz solid in net as Phantoms down Bruins

With Danny Briere’s upcoming retirement ceremony on Tuesday, Denise Mroz looked back at what Briere meant to Philadelphia during his tenure in Orange and Black - A celebration for Danny Briere

Ahead of his retirement ceremony, Rob Riches wonders where Briere ranks among the other Flyers greats - Where does Danny Briere rank among the Flyers all-timers?

The Flyers fought back for a point in the standings, but fell to the Buffalo Sabres on a breakaway goal by Zemgus Girgensons. Kevin Durso provided coverage - Girgensons nets OT winner as Sabres outlast Flyers

After surviving the first two weeks of the season, the Flyers next two weeks are a time to prove the old habits of last season are gone. Kevin Durso breaks down the importance of the next two weeks - Next two weeks for Flyers just as crucial as start

In his weekly column, Bill Meltzer looks at Jake Voracek's personal point struggle and how the All-Star winger is trying to not let frustration get to him - Voracek Fighting to Not Let Point Drought Bother Him