Stolarz solid in net as Phantoms down Bruins 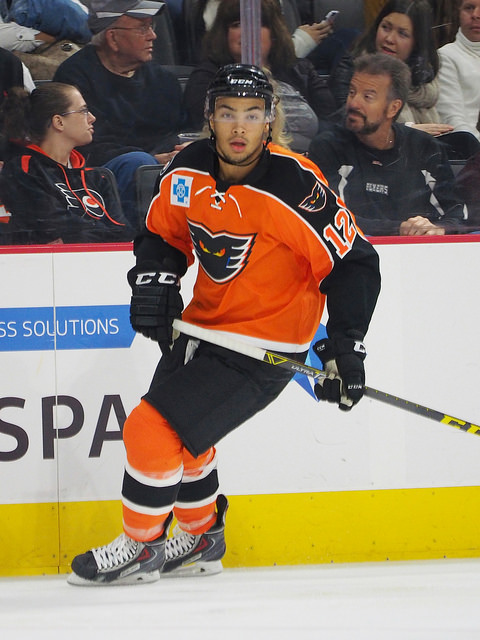 Through the first four games of the season, the Phantoms had struggled to find that winning formula.

Perhaps Anthony Stolarz is a big piece of that winning formula.

Stolarz was in goal for the Phantoms first win of the season and again for the second on Saturday, as the Phantoms claimed a 2-1 victory over the Providence Bruins at PPL Center.

The Phantoms jumped out to an early lead. Pavel Padakin fired a shot from the right face-off circle that went wide. But the carom bounced right to the tape of Tyrell Goulbourne, who fired past Zane McIntyre for the game's first goal at 5:45.

The teams traded power-play opportunities in the first, but the game remained 1-0 in favor of the Phantoms following 20 minutes.

The second period featured two goals and plenty of extra-curriculars.

Providence tied the game at 2:03. With the Phantoms penned in the offensive zone, Frank Vatrano and Seth Griffith broke out on a two-on-one after the puck was moved ahead to the neutral zone by Alexander Khokhlachev. Griffith entered the zone with the puck and used a toe-drag move to get Andrew MacDonald sliding widely across the ice. Griffith finished with a sharp shot from the slot that beat Stolarz to even the score.

The Phantoms would retake the lead at 10:37 with a power-play goal. Again, it was Padakin with the set-up, leading a cutting Petr Straka with a pass to the slot. Straka roared in on goal and snapped a high shot past McIntyre.

The period also featured eight penalties between the two sides, including a short, but sweet fight for Goulbourne, who on one punch, knocked Anthony Camara to the ice.

In the third, the Bruins charged with much better scoring chances and a power play with 10 minutes remaining that would test the Phantoms. Stolarz stood tall, stopping 23 of 24 shots for Providence. The Phantoms penalty kill, which struggled in Providence on Friday allowing three goals, was a perfect 4-for-4 on Saturday.

Aaron Palushaj iced the game with an empty-net goal with 27 seconds to play.

The Phantoms improved to 2-3-0 on the season and will return to face the Toronto Marlies at home on Sunday at 5:05 p.m.

Petr Straka on his current four-game goal streak – "It's about being in the hard areas. All the goals I scored before today, they were all ugly. That's the area where you want to go when you see the pucks coming there. I'm doing that and I'm fortunate enough that I can find the pucks and put them in the back of the net."

Tyrell Goulbourne on the energy of PPL Center in a win and after his knockout fight – "It was unreal. It was good off the start but after that it was really good. These guys are amazing. They're really loud out there and they support us day in and day out."

Anthony Stolarz on the penalty kill – "We definitely wanted to improve that. I think tonight the D did a good of boxing guys out in front and forwards did a good job of keeping their sticks in the lanes and not giving them any cross-ice passes. Obviously when you're down a man, they were going to be able to create a little more offense, but tonight we did a good job limiting their grade A scoring chances."

Head coach Scott Gordon on Stolarz performance – "That's a huge part of [penalty kill.] He caight the puck well tonight. I thought he got out and stopped and set it up for our D, played it when he had to play it. Probably one of the better jobs I've seen a goalie do as far as handling the puck and his decision making. A lot of times, it's not how much you play it, it's making the right decisions that, for me, decides whether a goalie does a good job of handling the puck."