Eagles Flyers Phillies Sixers About Us Write For Us
Sixers set records on consecutive nights, fall to Memphis 92-84
Quotable: 'Tons of progression' made on six-game road trip 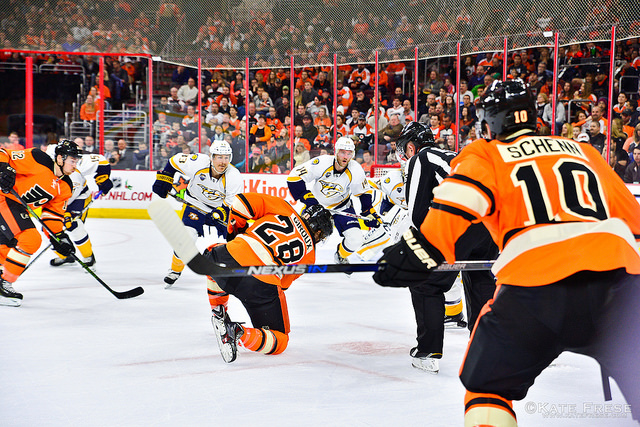 Ryan White skated off the ice during a game against the Carolina Hurricanes with the result of an upper-body injury predicted to last two-to-four weeks. In an attempt to adjust, head coach Dave Hakstol placed Jake Voracek on the third line.

With his absence of the first line, Brayden Schenn and Michael Raffl have stepped up to create a strong first line. Both players know their role, but what will happen when White returns? Who will stay on the first line?

As the season started, Raffl had a slow start. He wasn’t taking many shots and as of the Flyers last game on Nov. 28 had a total of one goal, two assists and three points. That's virtually no point production from a player who scored 21 goals a season ago.

Raffl had started the season on the top line with Voracek and Claude Giroux, but has been shuffled throughout previous weeks. The last two games, however, as part of the top line with Schenn and Giroux, the Flyers have earned two wins against two elite teams in Nashville and New York, and Raffl has been a central figure. He is a fast and physical player creating space to score. He had a role in those two wins.

Brayden Schenn is strong playing wing on the first line. With six goals, three assists for a total of nine points and averaging over 17 minutes of ice time, he is one of the production leaders on the team. Voracek had said, after playing with Schenn, that is was the best the first line had played all season.

Giroux will make passes without even looking in Schenn’s direction and Schenn is there to catch the puck. This style play has earned two goals, one from Giroux and one from Schenn, in the last week.

"We’re pass-first players, but we’ve been trying to shoot more and go to the net a little bit more," Giroux said. "I think Schenner brings a little of both of that."

Finding his way on the first line, Schenn is also improving his two-way play and he is creating open space for the line. Staying at home in front of the net is a smart role for him. He provides a screen and he waits for the puck to be fed to him and tips the puck to the net. Being a part of the first line brings Schenn a certain confidence and it shows.

Only Hakstol can make the choice of which player stays. It may all depend on who is "hot" at the moment. Maybe Voracek won’t return to the top line at all, if the current chemistry stays solid on all lines. Hopefully, whatever the decision, the Flyers stay strong and keep having success.

He had a Break away against NYR and he should have shot it and he tried to pass and nothing came of it.

Against Nashville he had a shot on goal and nothing. he actually double pumped and by that time Rinne saw him and was able to save the shot. Last year that was a goal.

Good article about the value of both players to the first line. I see more energy with Schenn vs Raffl however. So my vote would be to keep Schenn in the first line. My heart and sympathy lies with Vorachek. I think he's playing through an injury. He is not as spontaneous and confident as he was last year. He does have incredible leg strength when mucking it up in the corners. Thanks Denise for a thoughtful article and to FLYER FANS--Keep the Faith!!

Here's the real answer: have Schenn be the 2nd line center -- it's his natural position! Move Coots down to #3 center where he belongs. Get a fleet, young LW with scoring potential to work with G on the 1st line while returning Jake to the top unit. Hexy, here are some wingers that you can get in a trade tomorrow: Fiala, Yakupov, Skinner. Let one of them play with G and Jake. I guarantee Jake starts scoring goals along with the new guy, and G then leads the league in assists (maybe scoring, too). The Flyers need a jolt on the offense. A trade such as for one of the above plus moving Schenn and Coots and, then, Jake back to the top line will be just the ticket. No need to thank me directly, Hexy, just make some moves already and start winning!