Eagles Flyers Phillies Sixers About Us Write For Us
Quotable: 'Tons of progression' made on six-game road trip
Phillies claim right-hander Michael Mariot off waivers

Hakstol's Happenings: Can the Flyers capitalize on momentum? 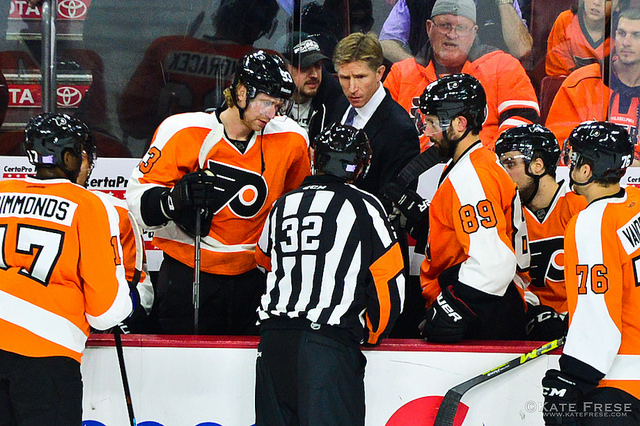 As the Flyers conclude their first full month of the season, they happen to do so under circumstances that not many can say that they saw coming -- back-to-back wins over a pair of top teams in the Nashville Predators and New York Rangers.

November wasn't a pretty month for the Orange and Black. Between sloppy play, as they saw two separate losing streaks of three games apiece. Their power play was dismal, their goals-for-per-game plummeted to historically-bad levels, and they had a habit of not showing up to games and making opponents look like the 1976-77 Montreal Canadiens.

Interestingly enough, they barely showed up for the start of Saturday's game against the Rangers, as they recorded just four shots on goal in the first period. They did, however, bounce back with a fury in the second, and the end result was what could arguably be considered their biggest win of the season to this point.

Will Dave Hakstol's team be able to capitalize on this slight momentum surge heading into December? The next six games will help decide whether or not the Flyers can go onward and upward, or continue their stretch of mediocrity.

Over the next six games, the Orange and Black face Ottawa, New Jersey, Columbus (back-to-back games), the New York Islanders, St. Louis and Dallas (another back-to-back).

To put it in perspective, those six games represent half of what the Flyers will be playing in the month. They have lost twice already against those Metro Division teams (falling 4-1 to the Devils on Oct. 29 and 3-1 to the Islanders last Wednesday). They have fallen to the Stars already, and have looked listless against the Senators in their last meeting on Nov. 21. They haven't faced the Blues or Blue Jackets yet this season, but while the Blue Jackets have looked revitalized under new coach John Tortorella, they still sit three points behind the Flyers for last in the Metro.

Of those six teams, five have winning records, and two of them (the Stars and Blues, respectively) are in first and second place in the ever-tough Central Division. Clearly, the first half of the month of December will pose another tough scheduling challenge for the Orange and Black.

It's also become a recurring theme for the Flyers that they can do well against the better quality of competition, but not look as steady against the lesser teams. There's really no way to explain why that's become a trend for the team, but at the end of the day, winning against good teams is the sort of problem that a lot of teams would not mind having.

Sure, the Flyers are still a team in transition, and expectations are tapered. While the Flyers' struggles are tough to watch night in and night out, they are still to be expected. But even when expectations are lowered, teams still have to capitalize on any momentum they can find, and this case is no different for the Orange and Black.

The Flyers have demonstrated how sluggish they can be throughout November, but capped the month off with two strong efforts. If anything, those two wins over the Predators and Rangers will surely provide the team with plenty of momentum into another tough month. Whether or not the Flyers can keep it up is another question.