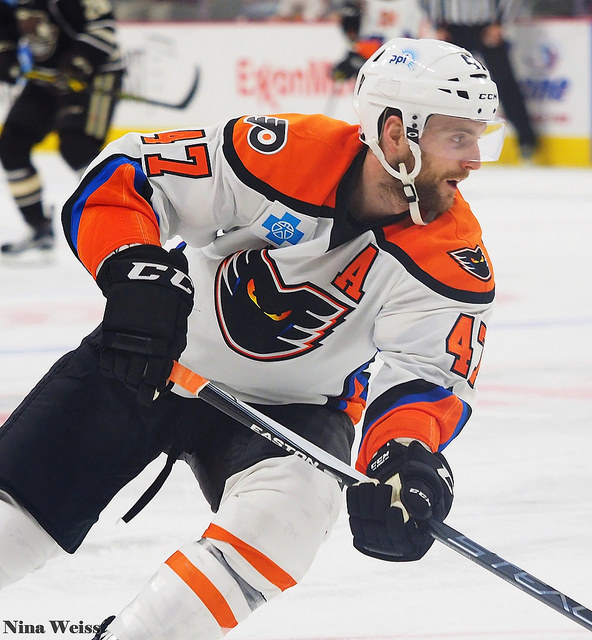 In another 3-for-3 weekend for the Phantoms, the second game featured the same result as the first.

After dropping the first game of the weekend to Hershey at home, the Phantoms couldn't mount a comeback in a 2-1 loss against the Syracuse Crunch on Saturday night.

The Crunch struck for an early lead with an 11-8 shot advantage in the first. Two of the 11 shots found the back of the net, both by Jonathan Marchessault.

Marchessault struck for the first time at 10:02, with assists going to Tanner Richard and Slater Koekkoek. Richard also assisted on Marchessault's second goal at 14:42, as did Yanni Gourde. The two goals brought Marchessault's season total to six.

Late in the second, the Phantoms got a four-minute power play opportunity and cashed in. Andrew MacDonald fired a shot from the point that made its way through and beat Adam Wilcox to cut the lead in half. Shayne Gostisbehere and Tim Brent assisted on MacDonald's first as a Phantom, coming with 18 seconds remaining in the second period.

The Phantoms only took seven shots in a scoreless third.

Two bright spots for the Phantoms were a perfect penalty kill, going 4-for-4, and another strong game from Anthony Stolarz, who stopped 31 of 33 shots by Syracuse.

The Phantoms dropped to 4-7-0 with the loss. They close out the weekend hosting the Binghamton Senators on Sunday afternoon at 5:05 p.m.