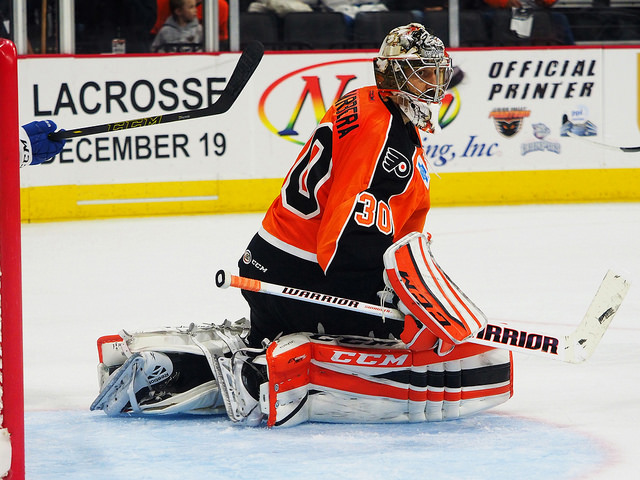 The Phantoms already depleted roster took another hit on Sunday, but in a different way. It wasn't an injury that left them without another regular.

The Flyers recalled Chris Conner from the team on Sunday afternoon. And so Conner was on his way to Vancouver and into his place stepped Kevin Sundher.

Sundher was brought to the Phantoms from Reading on a tryout. And in his very first game with Lehigh Valley, he made an impact.

Sundher capped off an 10-round shootout, that only happened after the Phantoms blew a 4-1 lead, with a goal to give the Phantoms a 5-4 win over the Hershey Bears on Sunday evening at Giant Center.

The Phantoms came out roaring from the start. In a first period where they outshot the Bears, 17-8, they managed the lead on a power-play goal by Danick Martel at 9:59 of the period. Assists went to Sam Morin and Petr Straka. It was Morin's first point of the season and as a pro.

Hershey tied the game early in the second as Christian Djoos scored his first of the season at 1:40. But the Phantoms again stormed back.

Lehigh Valley would score three times in a span of 3:56. Straka got things started with his fifth of the season from Martel and Shayne Gostisbehere. Aaron Palushaj would connect for his third of the season just 1:27 later from Tim Brent and Davis Drewiske. Straka added his second of the game and sixth of the season while shorthanded from Matt Lashoff and goalie Jason LaBarbera.

The Bears also scored a late goal in the second. With just eight seconds left Sean Collins scored on the power play to cut the Phantoms lead to two.

The chances were high in the third, with the teams tallying shot after shot in the final period. The Bears took 13 to the Phantoms 12 in the final 20 minutes. But the Bears managed to convert on two of those shots.

At 9:18, the Bears cut the lead to one with a power-play goal by Chris Bourque. With just 2:07 to play, Zach Sill managed to squeeze a goal past LaBarbera to even the score and force overtime.

In the overtime, the Phantoms couldn't score on a couple of breakaway chances and had to survive a penalty kill in the final two minutes of the five-minute 3-on-3 to force the shootout.

From there, the teams went four more rounds without a goal before Collins struck to put the Bears ahead in the eighth round. Brandon Alderson followed with a goal to even things back up and force and ninth round.

Finally, in the 10th round, it was the newcomer Sundher who managed to get the game-winning goal, securing a 5-4 win for the Phantoms.

LaBarbera made 29 saves in regulation and eight more in the shootout, totalling 37 saves for the game.

The Phantoms brought their record to 4-5-0 on the season. This was the first time the Phantoms had played a game that reached overtime this season.

The two teams meet again on Friday night, this time at PPL Center. Game time is set for 7:05 p.m.