Eagles Flyers Phillies Sixers About Us Write For Us
This Week in Flyers History: Week ending November 29
Sixers set records on consecutive nights, fall to Memphis 92-84 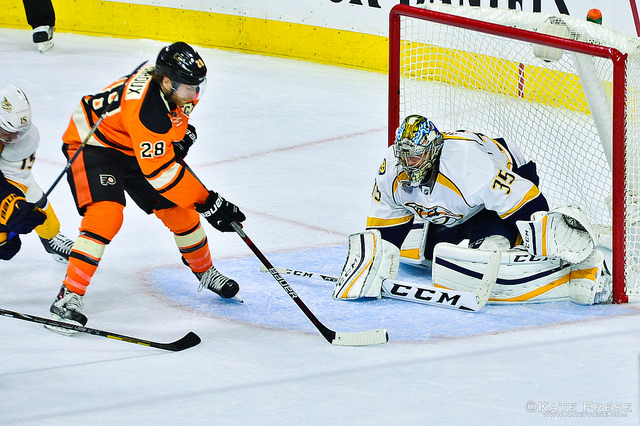 Well, how is that for a change of pace? With wins in three of four games this week, the Flyers earned a solid six points in the standings.

It is a different tune than what we've been playing in the past few weeks.

So this week, it was actually harder to pick out a Player of the Week given the success of some players.

Our Player of the Week is Claude Giroux. Giroux had six points in the four games this week, scoring two goals and adding four assists.

Our Play of the Week is split between two different plays that look so similar, we couldn't pick just one. Shayne Gostisbehere had two overtime goals this week, beating the Carolina Hurricanes on Monday and the Nashville Predators on Friday. The play was nearly identical as Giroux directed traffic before threading the pass to the high slot for a one-timer by Gostisbehere.

The Flyers are in action three times this week, as they continue a road trip with games against the Ottawa Senators on Tuesday and New Jersey Devils on Friday before returning home on Saturday to face the Columbus Blue Jackets.

Player of the Week - Past Selections