The Philadelphia Flyers welcomed Mark Streit back to the lineup as the team looked to rebound from their loss to the Anaheim Ducks a few nights ago. With Streit's return, the team needed to do some lineup juggling, and sent little used Sam Gagner to the AHL.

With the new defensive lineup, which still lacked an injured Michael Del Zotto, the Flyers didn't find much offense against the San Jose Sharks.  The Flyers had only three shots on goal in the first period, but found themselves with a 2-1 lead early in the third period nonetheless. Unfortunately the Flyers couldn't hold onto that lead. They took a string of penalties, and the Sharks scored three power play goals plus another one seconds after a penalty expired to seize a 4-2 victory. 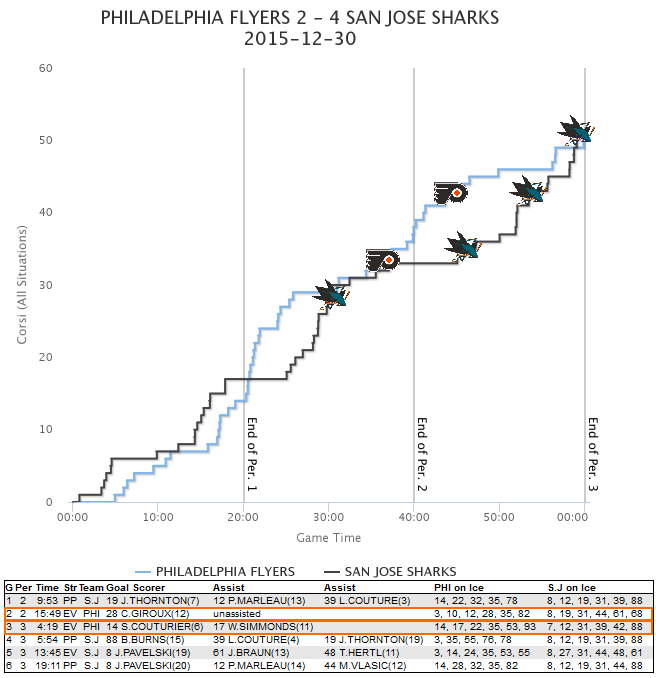 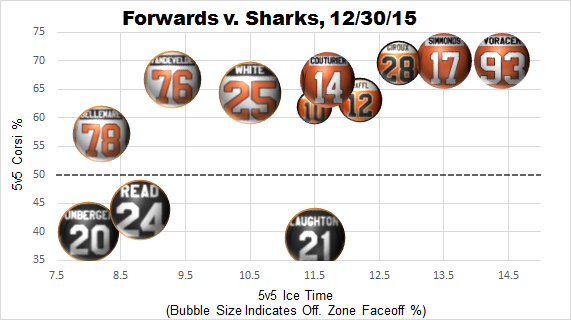 The Corsi percentages look pretty good for most of the forward lines, although the Flyers did not have nearly as many actual scoring chances as this would imply.

The Claude Giroux line generally did pretty well against the top forwards and defensemen for the Sharks, although there were very few chances for either side in such matchups. Giroux also broke his pointless streak with a fluky goal on a shot directly off a face-off.

Sean Couturier added a pretty breakaway goal to put the Flyers in front, and Wayne Simmonds did a lot of the hard work on the play. It was another solid night for Couturier's group overall.

Lastly, the Pierre-Edouard Bellemare line had a decent night at 5v5, although they can't be happy with the poor penalty killing results recently.  Also, Chris VandeVelde left the game after a big hit, and his status is uncertain for the Flyers next game. 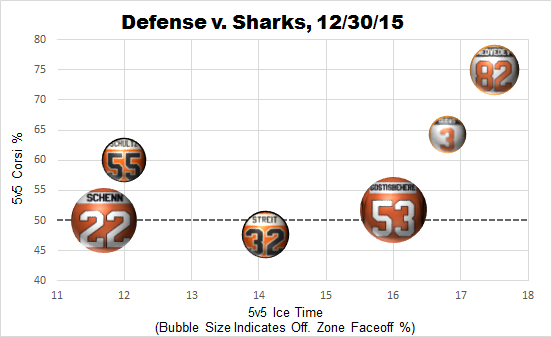 The Flyers had a new look on the backend with Mark Streit in the lineup. These pairs might not last long with the return of Michael Del Zotto to the lineup looming, but on this night Brandon Manning was the odd man out.

Streit played with Nick Schultz, as was often the case early in the season. Not an overall great night for the pair as Streit tries to get back up to speed.

It was a forgettable night for Luke Schenn and Shayne Gostisbehere as well. Their Corsi percentage lagged behind the other pairs, and Ghost took two third-period penalties that resulted in key goals for the Sharks. Gostisbehere did see additional shifts with with Medvedev and Streit, which may be a sign of things to come when the defensive pairs will change again with Del Zotto back in the lineup.