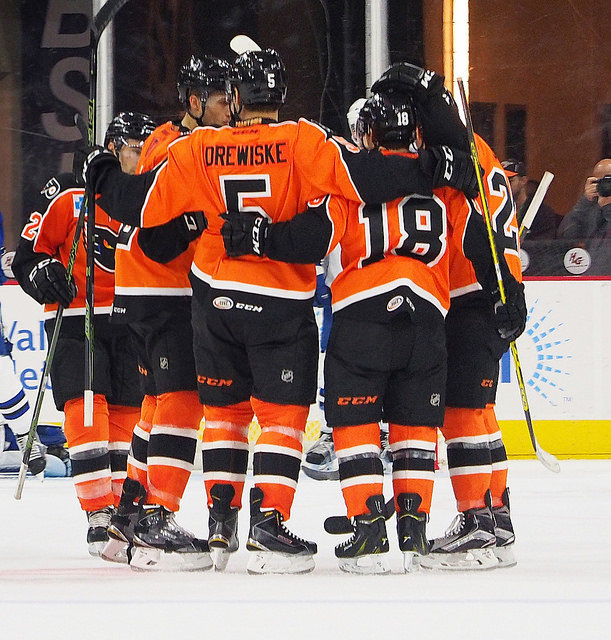 Coming into Friday's battle at the Mohegan Sun Arena, the Wilkes-Barre/Scranton Penguins had only lost two games all season. None of those losses had come at home.

Aaron Palushaj, Mark Alt and Taylor Leier recorded goals, and Anthony Stolarz made a season-high 35 saves to lead the Lehigh Valley Phantoms past the Penguins on Friday night by a score of 3-1.

It looked like it might be a rough night, as Conor Sheary got the home team on the board just 2:58 into the opening frame. There was a net-mouth scramble when Sheary picked out the rebound of a Scott Wilson shot and shoveled it over Stolarz.

The Penguins had two great power-play chances in the period, but as has been the case as of late, the Phantoms penalty kill was perfect.

Palushaj got Lehigh Valley on the board at 5:35 of the second period. With Kael Mouillierat off for a roughing penalty, Stolarz and Andrew MacDonald teamed up to spring Palushaj on a breakaway, and he made it count. He went forehand to backhand to put the puck through the legs of Matt Murray.

Alt got the Phantoms the lead just 4:13 later. Tim Brent found Alt wide open down the right hand side, and Alt wristed the puck past Murray. The chances again favored the Penguins in the period, as they outshot Lehigh Valley, 16-8, in the second period.

In the third, Wilkes-Barre/Scranton threw everything and the kitchen sink at Stolarz, but he held firm. The turning point of the game overall was the Phantoms holding the Penguins top-ranked power play to an 0-for-6 night. With under a minute to play, Leier iced the game with an empty-net goal.

Up Next: Lehigh Valley takes a bus trip down Interstate 81 to face the Hershey Bears at Giant Center at 7:05 PM.