Flyers late rally not enough as Kings hang on 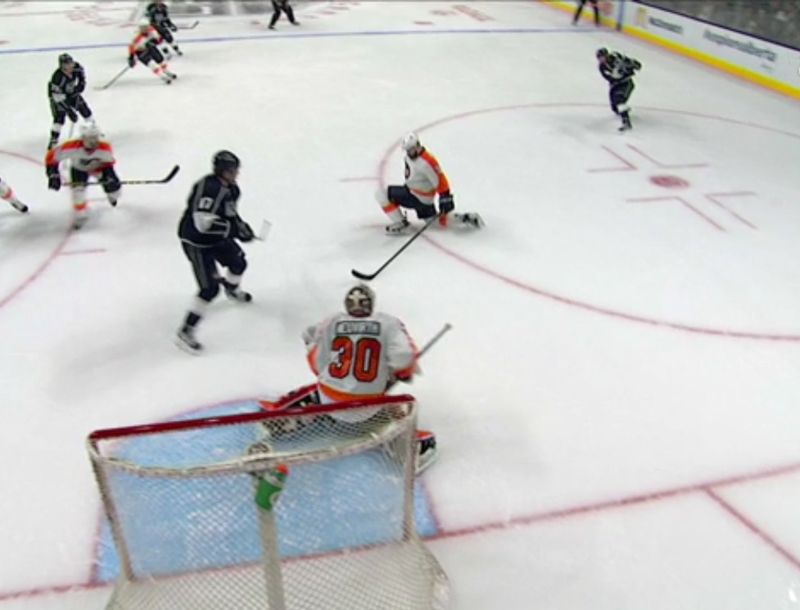 It had been a disappointing road trip and return from Christmas break for the Flyers.

As the new year began for the Flyers, the struggles did not end.

Two goals in the first period were enough for the Kings, as they helped send the Flyers to a winless road trip with a 2-1 loss at Staples Center on Saturday afternoon.

The Kings struck for the game's first goal at 7:33. Radko Gudas failed to get the puck out of the Flyers zone and turned the puck over to Dwight King. Gudas attempted to push King off the puck, but got caught and that set up a 3-on-1 chance for LA. King perfectly executed a give-and-go with Marian Gaborik and scored.

Late in the period, another turnover on the penalty kill led to another power play goal surrendered by the Flyers. Gudas moved the puck to the right corner off a face-off win. Ryan White tried a backhanded clearing attempt that was kept in. As the Kings went to work, the puck made its way to Drew Doughty, who launched a hard slap shot high over the glove of Michal Neuvirth to extend the lead to two.

The Flyers recovered somewhat with a more evenly-played second period, where they were particularly stronger defensively. But the Flyers could not solve Jonathan Quick through 40 to enter the third period facing a two-goal deficit.

The Flyers would get a chance to cut into the lead with 12:32 remaining in the third on a power play and do just that. A one-timer by Jake Voracek was stopped by Quick, but the rebound stayed near the crease. Wayne Simmonds threw it behind a sprawling Quick and Brayden Schenn tipped it in to cut the lead to one.

The Flyers would force a mad rally in the third, outshooting the Kings, 16-8, in the final period. But Quick stood tall, stopping 29 shots, to help the Kings hang on.

The loss marks the third straight for the Flyers. They return home to face the Montreal Canadiens on Tuesday night at 7:30 p.m.