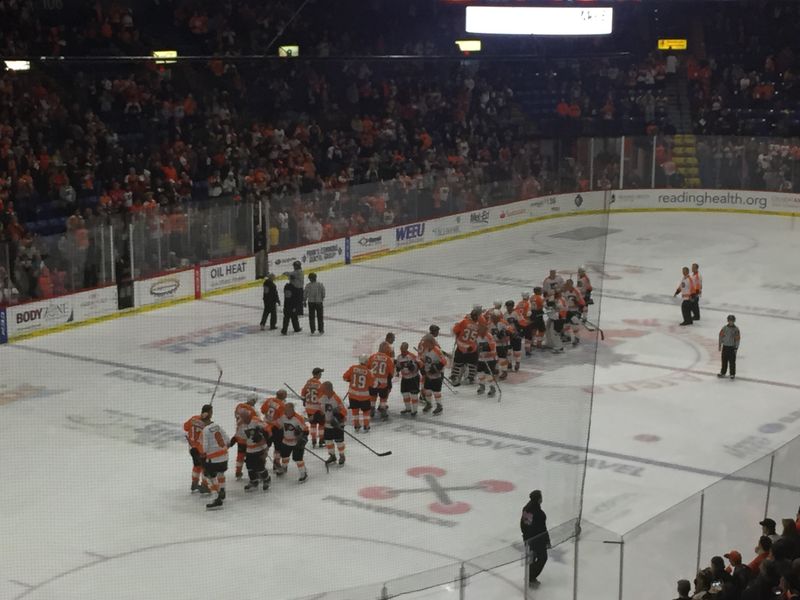 On the ice in the present day, the Flyers may not always be the most consistent bunch. But when it comes to honoring those of the past, the Flyer greats who came before and looking back on those memories while making new ones, the Flyers always deliver.

Friday night was no different as four decades of Flyers gathered to play in the Orange and Black Alumni Game, held at Santander Arena in Reading, Pa.

Seeing so many faces of the past, some that go as far back as the original team nearly 50 years ago and some that were Flyers just a few seasons ago, all on the same ice surface made for some great memories and a night of remembering and celebrating the history of Flyers.

From Bill Barber, Bobby Clarke and Bernie Parent to Dave Poulin and Mark Howe to the Watson brothers to Danny Briere and Kimmo Timonen, all eras were represented and delivered quite a show.

For Flyers fans, the memories come from watching the greats of the past simply take the ice.

On the opening face-off, there was Clarke and Barber, two-thirds of the LCB line, on the ice together again. Highlight reels and tributes were shown throughout the game. Old teammates playfully clashed in the corners, drawing rises from the crowd.

At the introductions, there were the usual ovations for Hall-of-Famers Parent, Clarke and Barber, but the player who seemed to draw the loudest ovation was Kimmo Timonen.

The memories of the night were widespread. In some cases, it was simply revisiting the great personalities of Flyers past or getting a glimpse at the days of old when helmets weren't a requirement.

It was a night to laugh, a night to smile, a night to remember and a night to learn — for the younger generation out there that may have been getting their first glimpse of No. 16 or No. 7 on the ice. What you saw more than anything was a uniting of family. The Flyers are indeed a family. If you wore the Orange and Black, you were part of something great, part of a history that does not get forgotten. And in a similar way, the fans in attendance were just a much a part of that family as the players are.

In the same way that the players shared memories of their playing days and the camaraderie they shared with the many teammates they had over the year, the fans got to look back on the players that they have enjoyed watching over the decades, all for the team they have followed for years — some the entire 49 in franchise history, others just a few years.

Ultimately, as they always do, the Flyers delivered on a night that was meant to be memorable to the fullest, supplying a little bit of everything from their past to a fanbase that loves the memories from yesteryear and the visions of the future.

The Flyers have tremendously stepped things up in recent years, holding four Hall of Fame ceremonies in two seasons — the second and last of the 2015-16 season will come later this month on Feb. 29 when Jim Watson is inducted — and now an Alumni Game that held the same meaning for players and fans alike, a chance for the Flyers and their fans, old and new, to come together in celebration of a treasured organization.