Flyers give Stolarz a vote of confidence as big decision looms 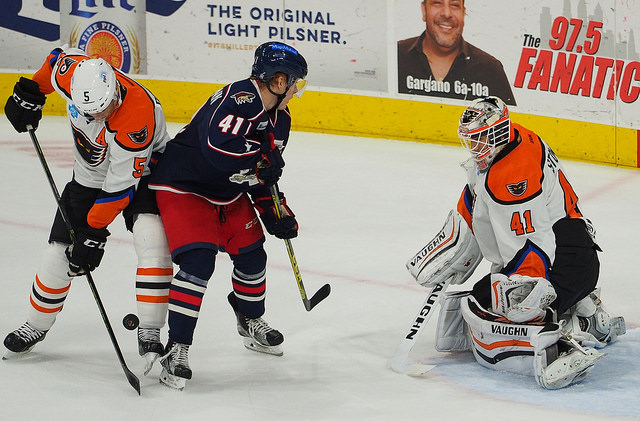 Philadelphia Flyers rookie goaltender Anthony Stolarz scarcely resembles the player who, on July 9, 2012, stepped onto the ice at the Skate Zone in Voorhees, NJ, for the first day of his first Development Camp. Although the towering teenager was a fine natural athlete and a confident, well-spoken young man even then, he was quite raw on the ice even by teenage goaltender standards.

It seemed clear that, while the tools might be there for a future NHL career, it was going to take many years of hard work both by the player and his goaltending coaches to refine the raw materials into anything close to a finished product.

Fast forward to February 2016. Stolarz is in his second year of pro hockey, and he was a standout in his first American Hockey League All-Star Game. He was among the top three goaltenders in the AHL for the first quarter of the season and showed mental toughness and resolve to get back on course after a few bumps in the road in the second quarter.

There's more economy of motion in Stolarz's goaltending style and less of a tendency to over-commit himself. There's noticeably bounce-back ability after an early goal, a bad goal or a loss. He tracks the puck better than he did as a rookie. His 6-foot-6 frame has filled out to an imposing 230-plus pounds and he is in excellent physical condition. He doesn't fade late in back-to-back starts. When he makes mistakes, he recognizes them.

"Last year, I would use my athleticism. This year, I am using a shuffle, getting across and getting the center of my body over the puck instead of having to lunge for the puck," Stolarz said.

Flyers goaltending development coach Brady Robinson has worked hard with Stolarz on his tracking — taking a quick peek around with his head to see where the attackers are and working on not losing sight of the puck. Stolarz has also worked on making sure he holds his angles.

"Brady has been huge for me. We clicked right from training camp, and I'm seeing results in my game. He's helped me with my patience and with my angles. I think I have more composure back there. I'm not flopping as much as I did last year. I'm just letting the play come to me," Stolarz said.

"Tracking the puck has been the biggest thing. Seeing the puck. I’m so big, if I see it, I stop it. I’ve been able to take away angles with the puck."

Is Stolarz ready for the NHL on a full-time basis? Probably not.

There are still times where he reverts to guessing and committing early. There are times where he could still do a better job deadening rebounds. His communication with his teammates on the ice — while vastly improved and becoming a strength of his game — are not yet fully on par with many veteran netminders.

Is Stolarz ready for a spot start in the NHL? He may find out very soon, and get a baptism by fire.

With the Flyers currently chasing both third place in the Metropolitan Division (an automatic playoff berth regardless of where any Atlantic Division teams finish) and an Eastern Conference wildcard spot, the team has arrived at a critical weekend under adverse conditions.

The Flyers, who have won three straight games, face back-to-back matinee games on  Saturday (at home against the New York Rangers) and Sunday (on the road against the Washington Capitals). By the time the Flyers play the Caps on Sunday, they'll have been in action for the third time in less than four nights and the fourth time in less than six nights.

If the schedule were not so tightly packed, it would be a no-brainer for the Flyers to start number one goaltender Steve Mason in all four games. However, the back-to-back setup makes doing so quite tough; especially so because Mason, who missed the final game before the All-Star break due to a nagging lower-body injury, is on a maintenance plan for the rest of the season in order to play through the injury.

It may be asking a little too much to expect him to play every minute of the four-in-six, although Flyers goaltending coach Kim Dillabaugh and head coach Dave Hakstol may ask Mason to honestly self-assess whether he feels up to it and leave the decision up to the player with a reminder that he has to think first of the team and not his own understandable desire to play as much as possible. Mason is usually honest about how he's feeling at a given time. He may not go into any specifics with the media, but he also doesn't lie.

Especially with Michal Neuvirth on the shelf for seven to 10 days from Feb. 2 due to a lower-body injury of his own, it is vital for the Flyers to keep Mason reasonably healthy and give him rest when he needs it. Enter Stolarz, who was called up in lieu of veteran Jason LaBarbera when Neuvirth went on injured reserve.

The decision was an intriguing one to say the least. LaBarbera was signed in the off-season for exactly this sort of possibility. He replaced Rob Zepp, who did well last year in the third-string starter role. The 36-year-old LaBarbera, after a tough start to the 2015-16 season, has been playing well in the AHL for the Phantoms the last couple months. Moreover, he has 187 games of NHL playing experience under his belt. Stolarz has none.

Last season as a rookie, Stolarz did receive a Flyers call-up when Phantoms starter Zepp was out briefly with a foot injury and Mason went down at the NHL level. Back then, however, there was little to no chance of Stolarz getting in an NHL game except for an in-game emergency in which then-Flyer Ray Emery had to leave with an injury or the Flyers were hopelessly on the wrong end of a blowout.

This time around, it's different. Stolarz stands at least a 50-50 chance, if not higher, of spelling Mason against either the Rangers or Capitals. The decision to recall Stolarz now is a pretty strong vote of confidence in his development by the Flyers' organization.

While Stolarz has downplayed the notion that this year's callup feels different and has said he's not changing how he prepares day-to-day (which is true of any goaltender), he admits that he's fully aware of the time of year, the vital importance of the next two games to the team and the fact that veteran LaBarbera is available and playing well.

Of the two games this weekend, the one against the Rangers may be the more crucial for the Flyers. Philly has at least an outside shot at catching second-place New York, as they are seven points behind with a potential four-point swing in the standings outlook depending on earning a regulation win or loss.

No matter what the Flyers do the rest of the season, they have virtually zero chance at catching the NHL-leading Capitals. In the meantime, Mason has a history of playing some of his best games when going head-to-head with Henrik Lundqvist and the Rangers.

Big decisions loom in the next 24 hours.