Flyers-Maple Leafs: By the Numbers This was a game against a very weak and depleted Toronto Maple Leafs team, but every time it seemed like the Philadelphia Flyers were in control, the Leafs made a push. The game was particularly crazy at the start of the third period, where three of the first four shots went in and Steve Mason left the game with a possible injury. Ultimately, the Flyers avoided what would have been an ugly loss, and won 5-4 in overtime.

The biggest thing tonight for the Flyers forwards was that Claude Giroux was unable to play with an upper-body injury.  It's presumed it's from a check to the head from P.K. Subban Friday night. In his place, Sam Gagner got the chance he has been waiting for about all season. Gagner jumped on it, scoring a goal early while this line accounted for two goals and was plus-2 on the night against the Leafs top line.

The Scott Laughton line and the Nick Cousins line split duty against what I suppose you would call the Leafs middle-six. The Leafs lineup was missing a lot of players, so there were few big names to work against. Cousins and R.J. Umberger went pointless and minus-1, although linemate Jakub Voracek added a goal and assist on the odd shift with Laughton and in the 3v3 overtime.

The Laughton line did much better. Their possession was much stronger, as both Laughton and Michael Raffl had two-point nights. Matt Read scored one goal and was second on the team with four shots on goal. This is the second consecutive strong game from this group, and perhaps this could be a new Flyers third line emerging.

This again left the Pierre-Edouard Bellemare line in a fourth-line role for the second straight game. They didn't do much with it in terms of possession, and even worse they conceded a third-period goal to the Leafs fourth line. 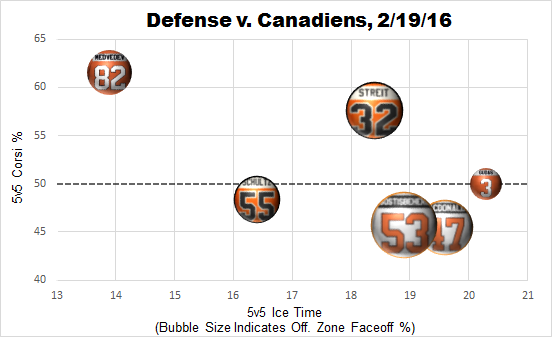 First, it's all about Ghost. Shayne Gostisbehere extended his point streak to 15 games with an overtime winner. Ghost has alternated between last-second points, or first-period points in recent games. Either way, the streak rolls on. This is his fourth overtime game winner this season.

Otherwise, he and partner Andrew MacDonald had a so-so night while playing big minutes. The Leafs tried to rough up Gostisbehere with some extra contact, and MacDonald had a goal waved off for goalie contact.

Mark Streit suffered the same result as MacDonald, having a goal waved off. He and partner Nick Schultz played minutes that were a little bit tougher, and kept things pretty steady.

Lastly, it was another active night for Radko Gudas, which thankfully didn't mean another questionable hit. Gudas led the team in ice time, hits and blocked shots. He provided an assist, but he and Schultz looked foolish on Peter Holland's goal when set up by Nazem Kadri.

Partner Evgeny Medvedev had his minutes cut, and Dave Hakstol probably didn't like Nick Spaling getting position on him to tip in a goal. It's kind of a similar story for Medvedev, having nice possession numbers, but being in Hakstol's doghouse.