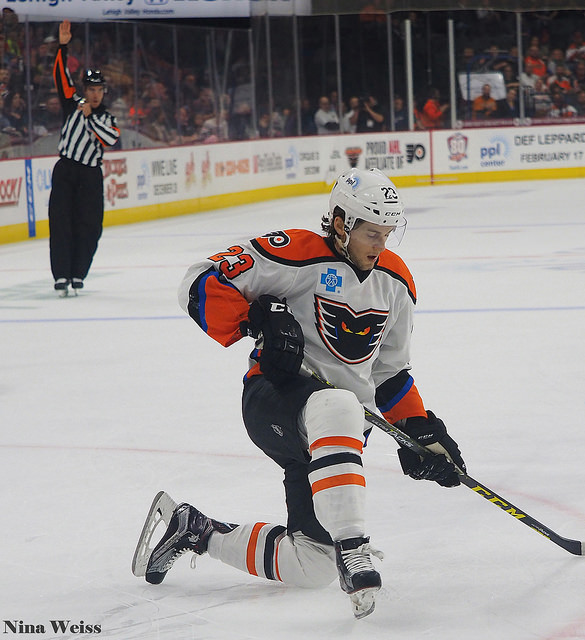 To say that this upcoming stretch for the Lehigh Valley Phantoms is crucial would be an understatement. With seven of the next eight games at the friendly confines of PPL Center, the Phantoms were presented with a perfect opportunity to make a drive to playoff contention. Starting it off on the right note was necessary.

Taylor Leier recorded his first professional hat trick, Phil DeSimone had three assists, and Jason LaBarbera made 20 saves to lead the Phantoms to a 7-2 thrashing of the Binghamton Senators on Wednesday night at PPL Center.

The Phantoms were on the gas nearly from the start. Colin McDonald notched his 10th of the season less than three minutes into the opening period. A turnover by Binghamton at the edge of their crease led to McDonald backhanding a shot up and over Senators' netminder Chris Driedger.

The Phantoms busted the game open five minutes later. Mike Sdao crushed Cole Bardreau with a nasty elbow behind the Lehigh Valley net, earning him a five-minute major. It took the Phantoms all of nine seconds to cash in. Leier got his first of the night and 13th of the season when he one-timed a Colin McDonald feed from the far circle at 7:38.

Exactly two minutes later, Robert Hagg got his second of the year on the power play as the Phantoms raced out to a quick 3-0 lead.

Looking to start a rally, Binghamton wasted no time getting on the board in the second. At 1:34 of the second, a quick shot by Conor Allen right off a faceoff beat LaBarbera to get the Senators on the board.

The Phantoms would dominate the rest of the period, however, grabbing two more goals in short order.

First, at 11:28 of the period, Chris Conner scored a highlight-reel goal, finishing a breakaway chance with a nice backhand move and finish for his 11th of the season. Just 1:11 later, DeSimone threaded a pass to Adam Comrie, who went top shelf for his first AHL goal.

Binghamton would cut into the lead at 14:48. LaBarbera lost his stick as the Senators pressed. A sharp-angle shot by Buddy Robinson hit off of Andrew MacDonald's skate in front and behind LaBarbera to make it a 5-2 game through two periods.

Leier would finish off his hat trick in the third. His second goal of the game came at 5:50 on the power play. Off a Cole Bardreau faceoff win, Andrew MacDonald gained control and faked a shot before feeding Leier who walked in and fired a high wrist shot over Dreidger.

The third goal and 15th of the season for Leier was more about right place, right time. Sam Morin crossed the blue line and fired a shot on goal that left a juicy rebound for Leier, who finished to complete the hat trick.

Up Next: The Phantoms are back in action on Friday night when they host the Portland Pirates. Game time is set for 7:05 p.m. from PPL Center.