Eagles Flyers Phillies Sixers Union About Us Write For Us
2016 NBA Draft: An update on the Sixers potential draft positions; Celtics own a surplus of picks
Revisiting Super Bowl XXXIX 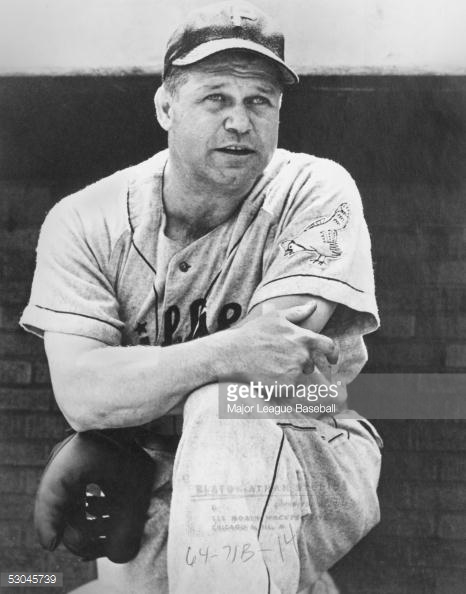 On February 1, 2016 the Philadelphia Phillies unveiled a new home alternate jersey to be worn during all six business person special games this season -- an all red top with the current red "Phillies" script outlined in white across the chest. The Phillies social media outlets noted that this would be the first time the team will wear a red jersey in regular season play since 1979 (the infamous Saturday Night Specials).

The announcement received mixed reactions from fans on social media. Regardless of how you feel about the team's new alternate, the overall mix of jerseys that the team currently has is widely considered to be one of the best in the league. However, this was not always the case. One of the most interesting Phillies uniform aberrations were their 1944-45 home and away duds.

In 1942, the Phillies posted a sultry 43-111 record, the worst in franchise history. Financially-strapped owner Gerald Nugent, who had owned the club since 1931 and needed an advance from the league just so the club could complete Spring Training, sought to sell the club at season's end. In 1943, Major League Baseball assumed ownership of the beleaguered Phillies after then Commissioner Kennesaw Mountain Landis quashed a sale to Bill Veeck. In March 1943, the league sold the club to William D. Cox for $80,000. The Phillies finished the season in the National League cellar with a 64-90 record, and word soon spread that Cox bet on several Phillies games that season. Commissioner Landis banned Cox from baseball and the Phillies were subsequently sold to Robert "Bob" Carpenter for $400,000.

Carpenter knew rebuilding would be difficult and he understood the need for fan support. On January 25, 1944 he announced a fan-based contest to rename the team, which he hoped would induce fan interest. The Associated Press quoted Carpenter, who said that the only stipulation was that the submission had to be "an emblem or insignia that is strictly Philadelphia...". The Phillies received 5,098 letters which included 634 names. The winning entry was 'Blue Jays', the name submitted by Elizabeth Crooks of Philadelphia, who won a $100 war bond for her suggestion. (Other suggestions included 'Daisies' and 'Stinkers'). According to the Eugene Guard, "Mrs. Crooks chose the name, she said, 'because it reflects a new team spirit. The Blue Jay is colorful in personality and his plumage is a brilliant blue, a color the Phillies could use decoratively and psychologically.'"

The name, however, was met with disapproval by students at Johns Hopkins University. The Mason City Globe-Gazette reported on March 9, 1944 that undergraduates stressed in a monthly newsletter that "while John [sic] Hopkins teams were 'not always of championship quality' they rated ahead of the Phillies who had been mediocre over a period of years." Grantland Rice addressed the controversy in a column in the Harrisburg Telegraph on March 17, 1944. He opined that "The Blue Jays belong to Johns Hopkins. Johns Hopkins is one of our greatest medical and collegiate centers - far more important than the Phillies can ever hope to be, even if they win a pennant and a World Series." Rice ended his article by stating that "They [the Phillies] are still the Phillies - and they always will be the Phillies, win, lose or last. And usually last." Despite the controversy, the Phillies kept the name and altered their uniform for the 1944 season. 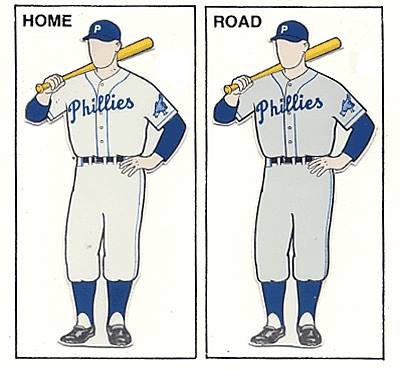 The blue jay was added as a sleeve patch on the moderately updated Phillies jersey (pictured above the 1944 section in the image above). The jersey lettering was dark blue. The cap was the same color and included a block-style "P". The blue jay insignia was added to team merchandise such as pennants and scorecards. Despite this, the moniker didn't stick, probably because the name 'Phillies' still appeared on the jersey and all merchandise, leaving fans confused about what to call their team. The team's 107-200 (.347) record during the two year 'Blue Jays' experiment proved the team needed more than just an aesthetic makeover. The blue jay sleeve patch was removed in the uniform remodel in 1946, but the secondary nickname pervaded until Carpenter officially gave up on it in 1950.

Although the blue jay only appeared on the uniform for two seasons (1944-45), its presence continues to incite interest from fans and baseball historians alike. Mitchell & Ness offered the jersey as part of their Cooperstown Collection until a few years ago when they discontinued production. The company commented that the jersey sold well because people liked the novelty of the blue jay patch and overall color profile. The Philadelphia blue jay uniform was a short lived aberration, but certainly not a forgotten one.

This is the best article on this topic that I've ever read.

At least the team tried to change their image. The Carpenter family brought a level of stability and competency the team sorely lacked and it paid off with the Whiz Kids winning the pennant in 1950.

BTW William Cox was the 2nd Phillies owner to be banned for life from baseball (must be a record). The first was Horace Fogel in 1912 who claimed the league and umpires were conspiring against his team and favoring the NY Giants. Fogel also suggested the Phillies change their name to the "Live Wires" but that didn't take either.