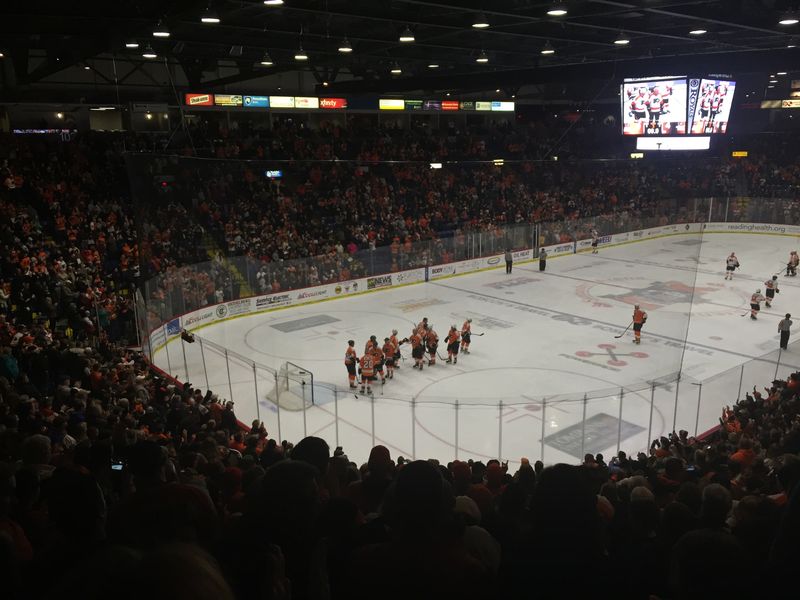 It was a night that centered around a celebration of Flyers hockey. With players from all decades of Flyers hockey in attendance, the Flyers alumni united for another excellent display that shows the pride of the organization and the many years of memories.

28 players made up the two rosters of Team Orange and Team White. Team Orange claimed the win, 9-4, on Friday night in the friendly match at Santander Arena in Reading, Pa.

The night began with a great video montage of each decade of Flyers hockey, updated to include the most recent seasons in the current decade. Rosters were introduced by Lou Nolan and in traditional Flyers fashion, Lauren Hart kicked off the festivities with "God Bless America."

Team White opened the scoring with a goal by Brad Marsh. Danny Briere evened things up for Team Orange moments later with a nice move to beat Robert Esche.

Briere struck again moments later with a high snap shot to give Team Orange the lead. They would carry that lead into the second.

In the middle period, Team Orange struck for four more goals. Ray Allison got things started early in the period. Midway through the frame, Briere set up Todd Fedoruk for a goal.

Allison would score his second of the game and Mark Freer would add a goal as well to cap the scoring for the period.

Team Orange didn't stop as the third period began, with Orest Kindrachuk scoring in the early moments of the third

Team White finally scored again as Andre Faust beat Frederic Cassivi to make it a 7-2 game. Fedoruk scored his second on a penalty shot to make it 8-2.

Team White mounted a bit of a rally from there with goals from Mitch Lamoureux and Jim Dowd to cut the lead to four.

Team Orange capped the scoring for the game when Frank "the Animal" Bialowas scored.

In addition to the 13 goals scored in the game, the memories were even more plentiful. Seeing Bobby Clarke and Bill Barber share the ice, hearing from coaches Bernie Parent and Dave Schultz, watching old-time hockey as players skated without lids brought back memories of the Broad Street Bullies.

Additionally, the event raised $85,000 — $40,000 going to Reading local charities through the Reading Royals Charities and $45,000 going to Flyers Charities.

As per usual with the Flyers, it was an event done extremely well by the Flyers and a tremendous success. Below you can watch highlights from the game courtesy of the Reading Royals and review the scoring summary.