Where does ‘Ghost’ rank among Flyers rookie defensemen? 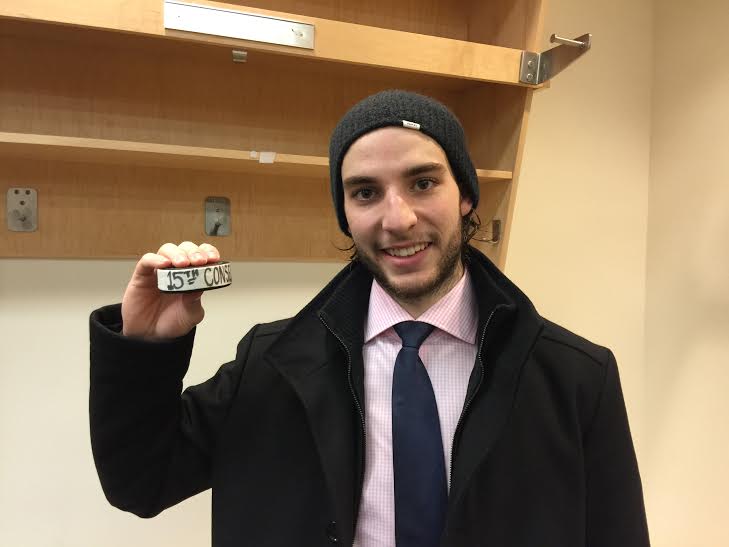 By the time the 2015-16 season is over, Shayne Gostisbehere has a good chance at posting the best individual rookie season by a Flyers defenseman in franchise history, although the team itself is not as good as the ones for whom his predecessors played. That has required him to hit the ground running rather than being able to find his niche as the season progressed.

In terms if goal scoring, Gostisbehere passed Bladon — 11 goals — for the second most in franchise history among rookie defensemen with his overtime game-winner on Saturday night. Wilson's 13 tallies still pace the field. However, Gostisbehere's current 15-game point streak is the best among all rookie skaters — defensemen or forward — in franchise history and has set a new NHL record among rookie defensemen.

Who was the best rookie defenseman in Flyers history? The vote here is for soon-to-be-inducted Flyers Hall of Famer Jimmy Watson. Although he was never a big point-getter in his career and had "only" 20 points (two goals, 18 assists in 78 regular season games) as a rookie in 1973-74, Watson was excellent in getting the puck up to the forwards and displaying poise in his own zone that defied the fact he was only 21 years old for most of the season. Even in the early stages of his NHL career, Watson was an important part of the two-way style preached by Hockey Hall of Fame coach Fred Shero.

The younger Watson brother was a very reliable positional defender in his own zone without the puck, skated well, and his style of play would have translated just fine to the latter-day puck-possession oriented game. He'd go on to become a five-time NHL All-Star and a member of Team Canada at the 1976 Canada Cup.

Even as a rookie, Watson was an asset to a team that won its first of two straight Stanley Cups and first of three straight trips to the Finals. Within a few years, Watson was the best all-around defenseman on the Flyers although Bladon put up bigger offensive numbers and the older Andre "Moose" Dupont was the most colorful member of the blue line.

Like older brother Joe Watson, there was nothing flashy about Jimmy Watson. Much like a less offensive-minded version of Eric Desjardins, the more you saw Jim Watson play, the more you appreciated him.

Unlike the aforementioned four Flyers rookie defensemen, Gostisbehere does not have the luxury of playing on a contending team with depth around him. He had a bit of a trial by fire during veteran Mark Streit's extended absence. "Ghost" not only passed that test but he's been getting better and better ever since.

As dynamic and exciting as Gostisbehere is, it will be fascinating in a few years to see where he ranks on the Flyers depth chart if Ivan Provorov and Travis Sanheim develop into what the Flyers hope they'll become. Provorov may be the most well-rounded and Sanheim could be the best playmaker and wrist-shooter.

Gostisbehere, however, brings a level of dynamic offense even at the NHL level — speed, take-charge disposition, explosive shot and a creative ability to find daylight — that there is every reason to believe he's the real deal if he stays healthy. His defensive game, while still a work in progress, is no worse than adequate and is still improving.

In the meantime, the Flyers still project Phantoms rookie Samuel Morin as  a future shutdown NHL defenseman.  The likes of Robert Hägg (thus far struggling but a player who has only just turned 21 years old and has been playing pro-grade competition since he was 17), Philippe Myers and Mark Friedman are X-factors in the development system.

Will all of them make it? That's unlikely. But if even one or two develop as hoped and projected, the old narrative that the Flyers are not good at developing impact defensemen will disappear. They are off to a tremendous start with Gostisbehere and the best may be yet to come.