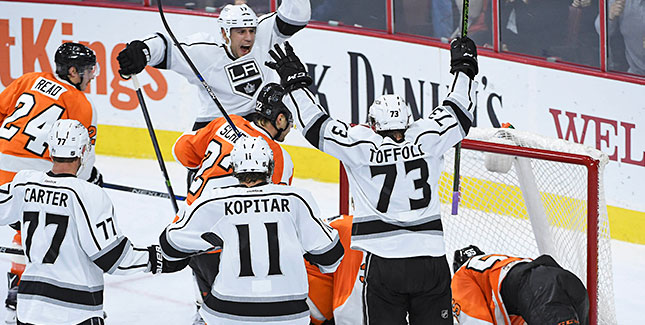 Under first-year head coach Dave Hakstol, the Philadelphia Flyers have been a pretty good team defensively at five-on-five. The club has yielded 112 goals at five-on-five (while scoring 120); tied for the fifth fewest goals against with the two teams skating at full strength.

However, when the other team has its goalie pulled to skate at 6-on-5, whether it's in a late-game situation with the Flyers trying to protect a lead or, less frequently, in a delayed-penalty situation where a simple touch-up is needed to halt play, the Flyers have had a major issue this season.

Through the games of March 23, the Flyers ranked in a tie for worst in the NHL — seven goals against — when the opposition has six skaters to their five. On multiple occasions, the Flyers have either lost a point as a result (losing via shootout or in overtime) or else they've allowed an opponent to leave with at least one point when they could have blanked them in the standings.

For whatever reason, when the Flyers are defending a narrow lead late in a game, they have retreated into an extremely passive defensive shell rather than being aggressive in pursuing the puck. They've allowed to much space for shots from the point or from outside the hash marks to weave their way through traffic and have created extra layers of screens in front of their own goalies in the process. Too many vital defensive zone faceoffs have been lost and too many dangerous forwards have been left unmarked around rebounds or to get their sticks into prime position for deflections.

Working backwards chronologically, the following games in which the Flyers have given up at least one 6-on-5 goal and/or collapsed (or nearly collapsed) with third period leads have been among the most notable games of the season:

Pivotal plays – Shorthanded 5-on-5 and 6-on-5 goal allowed late on March 22 at Columbus (3-2 shootout loss): The Flyers wasted a brilliant 51-save performance by Steve Mason after holding a 2-0 lead as time ticked down to the final 67 seconds. A horrific icing by Wayne Simmonds trying to score into an empty net from his own zone, a Boone Jenner deflection goal that was seemingly played with his stick blade over the crossbar, a deflected shot into traffic that resulted in a Cam Atkinson rebound goal, five futile Flyers shootout attempts after Mason kept the first four shooters at bay and a game-winning shootout goal by Jenner turned a vital victory into a lost point the Flyers can only hope doesn't haunt them in the final Eastern Conference standings come the conclusion of their game in Brooklyn on April 10.

Pivotal play – 6-on-5 delayed penalty goal on March 19 vs. Pittsburgh (4-1 regulation loss): The Flyers may very well have lost this game anyway, because they were outplayed throughout most of the game. However, the Flyers had just taken an early second period 1-0 lead when Trevor Daley got free to score on a delayed Philadelphia penalty just 1:01 after the Flyers' goal. It was a momentum builder for the Penguins.

Pivotal play – Save of the season on February 25 vs. Minnesota (3-2 regulation win):  The Flyers hung on for the regulation win in this instance but only because of a miraculous 10-bell save by Michal Neuvirth with the Wild attacking 6-on-5. With just 2.6 seconds left in the game and the Flyers clinging to a one-goal lead, Neuvirth dived across the crease as Charlie Coyle shot from inside the circle with Radko Gudas sprawled on the ice trying to block the shot. The puck hit the underside of the paddle of Neuvirth's stick and then dropped into the blue paint of the crease where it was covered.  The play was ruled no goal on the ice, which meant there needed to be a definitive camera angle that showed the puck entirely crossed the goal line in order for the Situation Room in Toronto to overturn it. No 100 percent conclusive single camera angle could be found. However, combinations of multiple camera angles suggested the puck may have crossed the goal line for a few hundredths of a second as it made initial contact with the "B" on the Bauer imprint on the paddle of the goalie's stick.

Pivotal play – 6-on-5 goal yielded on February 6 vs. NY Rangers (3-2 shootout loss): The Flyers held a 2-1 lead and were just 12.9 seconds away from a regulation win. Instead for the third time in a span of less than three weeks, the Flyers let at least one point slip away by yielding a goal within the final two minutes. A Keith Yandle point shot through multiple layers of screens in front of Mason found the back of the net to force overtime and the Rangers won via shootout. This game was also an example of another problem that has periodically hurt the Flyers at times this season: poor third periods in general when playing from ahead.  The Flyers led the Rangers 1-0 after two periods and 2-1 within the third period but ultimately could not hold off waves of New York attacks in a final stanza that saw Philly get outshot by an 11-1 margin. Actually, the Flyers' Ryan White scored on the team's lone shot of the third period. The Flyers also saw a 2-on-1 rush with an opportunity to ice the game go awry.

Pivotal play – Late 5-on-5 goal against on January 25 vs. Boston (3-2 regulation loss): The killer goal in this game was a five-on-five goal in the final two minutes but the fateful play unfolded much like many of the 6-on-5 goals the Flyers have yielded late in games, and served to cost the Flyers at least one point. With 1:54 left in the third period and the score tied at 2-2, the Flyers lost a battle in the defensive zone and then a D-to-D pass was deflected home in front  by Brett Connolly. Neuvirth, who was also screened, had no real chance at a save. A replay delay ensued to see if the puck was played with a high stick. It wasn't. Zdeno Chara and Kevan Miller got the assists on Connolly's game-winner.

Pivotal play – Late 6-on-5 goal against and narrow escape on January 5 vs. Montreal (4-3 regulation win): The Flyers yielded a 6-on-5 goal to the Habs with 57 seconds left in the game and Ben Scrivens pulled for an extra attacker. Daniel Carr swept a loose puck from the doorstep and over the goal line before it was kicked out by Neuvirth's pad. The on-ice ruling was no goal but it was quickly and correctly overturned on video review at 19:03. That set up a hairy finish. The Habs continued to attack at 6-on-5 with an empty net. The Habs took timeout with 25.2 seconds left and a neutral zone draw upcoming after a puck was played with a high stick. Neuvirth survived a nearly fatal mistake on a clearing attempt before time expired. The puck hit Pacioretty and came dangerously close to boomeranging into the net. The Flyers breathed a huge sigh of relief.

Pivotal play – 6-on-5 delayed penalty game-winning goal yielded on January 21 at Pittsburgh (4-3 regulation loss): The goal that proved to be the game-winner was a 6-on-5 Phil Kessel tally on a delayed penalty at 6:20 of the third period. At the time, it was an insurance goal for Pittsburgh — who had taken over the game after the Flyers controlled the first period and held an early 2-0 lead — but it ended up being the difference after the Flyers cut the gap to 4-3 with 3:25 left in regulation and pressed heavily the rest of the game.

Pivotal Play – Third period collapse on December 30 at San Jose (4-2 regulation loss): There was not a 6-on-5 goal involved in this game but the Flyers led this game, 2-1 in the third period and then yielded three goals in the final 15 minutes. The finishing blow was a Flyers penalty and a San Jose power play goal in the third period.

Pivotal Play – 6-on-5 game-tying goal against forces overtime on November 27 vs. Nashville (3-2 overtime win): On Black Friday, the Flyers were unable to nail down a 2-1 lead late in regulation. Pekka Rinne was pulled for an extra attacker with 1:30 left in the third period. With 1:06 left, Neuvirth dialed up a clutch save on a one-timer after Seth Jones held the puck in at the point on a failed Philadelphia clearing attempt. The Predators called timeout. With 20 seconds left in regulation, after the Preds moved the puck all around the perimeter and put a shot on net before Mike Fisher scored from the doorstep off a Filip Forsberg rebound. The Flyers rescued a win in overtime, courtesy of a Shayne Gostisbehere goal.

Pivotal play — 6-on-5 game-tying goal against forces overtime on November 17 vs. Los Angeles (3-2 shootout loss): Another game where Mason played brilliantly (38 saves on 40 shots) and was victimized by costly breakdowns. The Flyers held a pair of one-goal leads on a first period power play goal by Shayne Gostisbehere and a third-period even strength goal by Claude Giroux. LA responded with a first-period Jamie McBain power play goal that deflected off Flyers' defenseman Luke Schenn and a 6-on-5 tying goal by Milan Lucic in the final minute of regulation scored on the rebound of a double deflection that initially went off the goal post. Philadelphia settled for one point.

Pivotal play – Third period collapse on November 3 at Edmonton (4-2 regulation loss): The Flyers saw a 2-1 third period lead evaporate as the Oilers scored three times in a lopsided final stanza. The last one was an empty netter.

While not all of these games turned out badly for the Flyers and they've stolen a few extra points of their own along the way, there is rarely a sense that a game is under control when the team holds a late lead. Even in some games not listed — such as Mason's 20-save third period that enabled the Flyers to narrowly escape a collapse against Detroit in Philly's 4-3 home win over Detroit on March 15 — the Flyers' too-frequent struggles to close out games  with authority has created a situation down the stretch where no lead ever feels safe regardless of how well the Flyers' goaltender has played.

Final point: whether it's been Mason or Neuvirth in goal has not really mattered despite popular opinion that Mason has been the goalie more likely to yield a late killer goal. Both goalies have been victimized at different times, and it has rarely been their fault.