Bradford: ‘This is where I wanted to be’ 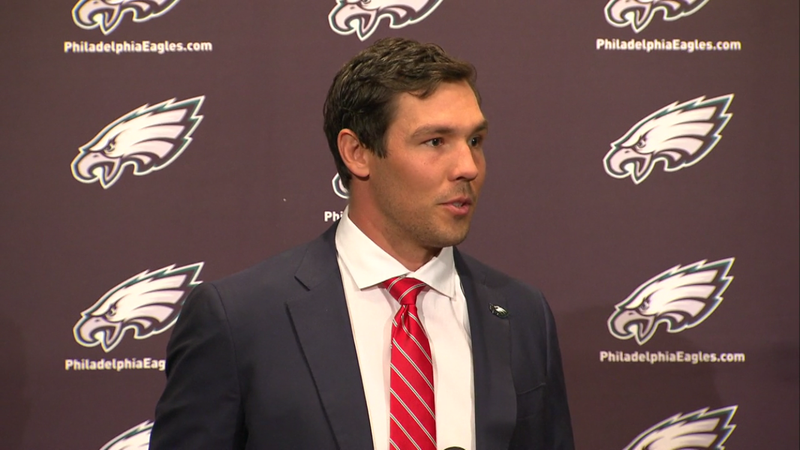 Sam Bradford wants to play in Philadelphia. He made that much clear this afternoon when he met with the media in his first press conference since signing his two-year, $36 million contract with the Eagles.

"I've always enjoyed my time here," Bradford said. "I think Philadelphia is a great sports city, I think our fans are the most passionate in the league. We have a great atmosphere every time we step in the Linc.

"There's never been a moment where I haven't enjoyed it here."

The signal caller also claimed that he never checked into what he could potentially get on the free agent market and the Eagles, and more specifically Howie Roseman, first contacted him about getting a contract done days after the season ended.

Bradford has struggled to stay healthy throughout the first six years of his NFL career, but was able to play 14 games for the Eagles last season and set career highs in passing yards and completion percentage. He noted that he will be able to fully workout this offseason and not have to worry about rehabbing an injury for the first time since 2013.

One of the reasons Bradford wanted to return to the Eagles was the hire of Doug Pederson. Pederson has spoken highly of Bradford numerous times since he was introduced as the Eagles head coach in January and the feelings seem mutual.

"Once you sit down and you talk to him, you realize he's played the position, he understands the game from the quarterback's perspective and that was really big to me," Bradford explained. "I think there's a big difference in someone like him who has seen [the game] first-hand and someone who hasn't."

Bradford also compared Pederson's offensive scheme to the one he ran under Pat Shurmur in St. Louis during his rookie season. The quarterback was also quick to point out how much he enjoys the progressions and the rhythm of the west coast offense and how he believes his ability to make checks at the line of scrimmage will make the Eagles offense more efficient.

"I think that my mind is a great attribute to my game," Bradford said. "I enjoy being able to go to the line and make those checks, make those audibles and I think just talking to [Pederson] and some of the freedom that he gave Alex [Smith] in Kansas City, I'm looking forward to that.

"I think anytime you can save yourself from wasting plays and get yourself into a better play, I think you have a chance to be successful."

Many of Bradford's supporters will point to his last seven games of 2015 as an example of what the QB is capable of doing in the NFL. In those games, Bradford completed 68 percent of his passes for 1,959 yards and 10 touchdowns. Bradford also pointed out that he ended last season on a high note and he hopes to build on that success in 2016.

"I think [my career] has been up and it's been down," Bradford said. "I think I faced a lot of different challenges in my first six years with some injuries, learning some new offenses, but I think my best days are ahead of me. I think towards the end of last year, the last half of the year, once I got comfortable with the system, once I felt comfortable with the guys around me, I felt like I started to play at a pretty high level and I'm just looking to build on that."