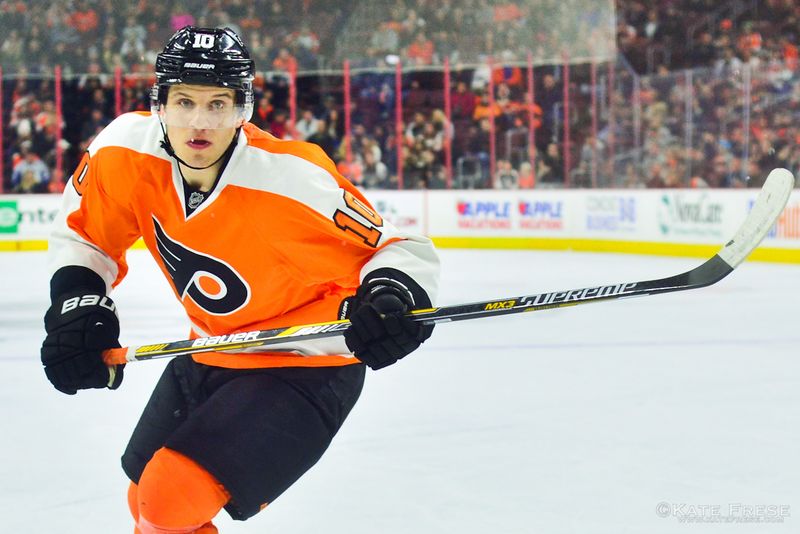 This could have been a very different season for Flyers forward Brayden Schenn. A player whose potential made general managers around the league fawn couldn’t get in his own boss' good graces.

It seemed from the start of general manager Ron Hextall’s tenure that Schenn was a marked man. In his very first draft, Schenn was rumored to be involved a potential trade for the Florida Panthers first overall pick, who inevitably became Aaron Ekblad.

This past offseason, Hextall gave Sean Couturier a very generous six-year, $26 million contract extension and left Schenn alone to see what he would do with one campaign left on his deal.

In his contract year, Schenn is proving that he can handle the top-line role and provide points on a regular basis. But it almost never came to be.

Not only did the Saskatoon native get leashed into the general manager’s doghouse, but head coach Dave Hakstol was also unimpressed with the 24-year-old’s play. Both Hextall and Hakstol let their disappointment be known going into training camp.

Hextall told reporters before camp, "Brayden has to be better."

Schenn started camp outside the top four lines playing with centers Scott Laughton and Nick Cousins along with left wing Chris Porter. Schenn scored in his first three preseason games, but it didn’t seem to improve his status to the front office.

"He’s scored each night, but that’s probably not the best way to evaluate the total performance," Hakstol said. "There’s some areas that he can become more complete in."

Despite his coach's early apprehension, Schenn began the season on the first unit power play and with Couturier and Wayne Simmonds as linemates. His initial returns in 2015 were good with four goals and two assists in the first eight games.

But then Schenn hit a wall. From late October through December, he produced only nine points in 26 games. It seemed the key part of the Mike Richards trade four years ago was ready to be trade bait.

Schenn, along with his brother Luke, were often the subject of trade rumors before even the 2015-16 campaign. Whether it was for Ekblad, Shea Weber or any defenseman the rumor pot stirrers could think of the Schenn brothers were involved. Therefore, it would be understandable if those rumors became a self-fulfilling prophecy with Luke and Brayden both becoming free agents at season’s end.

It was almost certain that Luke would be traded with a jam packed Flyers blueline that housed seven other defensemen and Andrew MacDonald buried in the AHL. And it seemed with his midseason struggles and the front office’s discontent, that Brayden’s days in the orange and black were done.

However, the dawn of 2016 seemed to spark Schenn. He scored a goal in the first two games of the new year and added two helpers in a three-point night against Montreal. But with the younger Schenn’s game turning around, the hammer finally fell for his brother.

Luke Schenn and Vincent Lecavalier were dealt to the Los Angeles Kings for center Jordan Weal and a third round pick on Jan. 6, 2016. Just a few days after the team’s loss in LA. The trade was heralded as a great move by anyone with a pulse in Philadelphia. However, it may have given Brayden Schenn the chance to finally stop worrying about what was going to happen to him and his sibling.

Since the deal, Schenn has 12 goals and 11 assists in 24 games. He’s admirably stepped in for an injured Claude Giroux on the top line and picked up his game with Jake Voracek sidelined for the next two weeks.

Things finally seem to be going Schenn’s way. At long last, he’s turning a corner after four seasons of sheltered play with the Flyers.

Schenn passes the eye test with his game becoming more well-rounded. It can certainly improve, but it is markedly better than in seasons past.

He played like a man possessed during Monday night’s contest against the Calgary Flames and he’s provided consistent offense with 27 points in the team’s previous 26 outings.

Despite playing a more balanced role, Schenn is creating more goals and points per game than previously in his career. His offensive point shares increased from 3.3 last season to 4.3 this year He’s projected to score 32 goals and accumulate 63 points meaning he’d average slightly over a point per game in the Flyers’ last 20 contests.

Though that projection may be too much to ask for, Schenn certainly is developing into a player Hextall and Hakstol want to keep around. He may never become the playmaker that Flyers fans hoped they were getting in the Richards trade. Though if he continues to round out his game, Schenn will certainly be worth the wait.