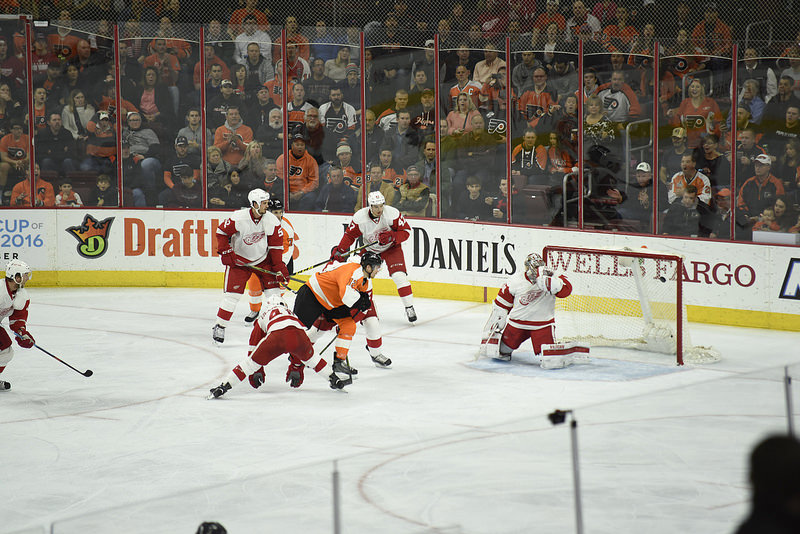 It was a game the Flyers had to have if they are going to make the playoffs. Michael Raffl scored a pair of goals, Wayne Simmonds and Shayne Gostisbehere also scored and, despite a late push by the Red Wings, the Philadelphia Flyers defeated Detroit 4-3 on Tuesday night at the Wells Fargo Center.

Michael Raffl put the Flyers ahead at 5:41 of the first period. Raffl came down the wing and made a nice move in tight for his 11th goal of the season. Nick Schultz and Mark Streit picked up the assists.

Just over a minute later, Wayne Simmonds put the Flyers ahead 2-0 with his 25th of the season. Simmonds slammed home the rebound of a Brayden Schenn shot in front. Claude Giroux had the second assist.

The Flyers had a golden chance to extend the lead midway through when Detroit took penalties within a minute of each other to give the Flyers a two man advantage. The controlled the puck for much of the power play but were unable to one by Petr Mrazek. The best chance came when a shot squeeked through Mrazek's pads briefly but the play was blown dead before the Flyers could ram it home.

Philadelphia outshot Detroit 23-3 in the opening period and held a 2-0 lead after one period of play.

Detroit would get one back just 2:14 into the second period. Andreas Athanasiou was able to beat Steve Mason for his sixth of the season, Riley Sheahan and Gustav Nyquist picked up the helpers.

Raffl restored the two goal lead just under five minutes later. Raffl slammed home his own rebound at 7:01 for his 12th of the season. Chris VandeVelde and Pierre-Edouard Bellemare picked up the assists.

Pavel Datsyuk closed the gap to one at 14:21 when he scored his 14th of the season to make it 3-2. Datsyuk took a pass from Tomas Tatar and beat beat Mason cleanly to the far side.

Shayne Gostisbehere picked up his 16th goal of the season at 18:54 of the period to put the Flyers back up by two. Gostisbehere took a shot that hit a Red Wings player's skate and went through the five hole. The goal was unassisted.

Philadelphia started the third period with 1:23 of power play time. The Flyers were unable to capitalize on the power play and the game remained 4-2.

Detroit would get their first power play of the game with just over ten minutes left in the third. Bellemare and VandeVelde did some outstanding work killing it off along with Mason.

Detroit would not go away and with 3:46 left Tomas Tatar scored his 19th of the season to make it 4-3. Mike Green and Datsyuk picked up the helpers.

Mason made 34 saves including 21 in the third period to preserve the 4-3 win.

The Flyers are back in action tomorrow night when they are in Chicago. Game time is 8:00.