Flyers playoff-like win as gritty as it gets 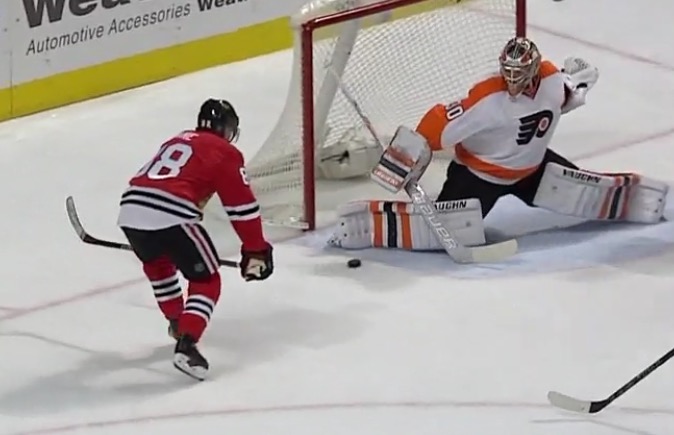 On the second end of a back-to-back, it was all about how much the Flyers could weather the storm and gut their way to a potential point or two to make the leap from the first team out to the last team in.

Down 1-0 after some unfortunate luck on the power play, the Flyers were facing a 5-on-3 penalty kill with two of their best penalty killers — Pierre-Edouard Bellemare and Chris VandeVelde — in the box and the Blackhawks rolling with Patrick Kane, Jonathan Toews, Artemi Panarin, Duncan Keith and Brent Seabrook for nearly two full minutes. Chicago didn't score.

The Flyers were a resilient bunch twice, rallying back for the tying goal in the first and again in the second, setting them up for a third-period fight to the finish.

The Flyers only managed four shots in the third, one being a long-range shot by Radko Gudas that deflected off a Blackhawks defender and past Scott Darling. The four they allowed were all testers on Michal Neuvirth, who stood tall in making 24 saves, but mainly the third period was about a gritty finish and an effort that wins games come playoff time.

For the Flyers, already in playoff mode, it was as fitting a finish as you could find as the team made the leap into a playoff position.

The Flyers have tackled this week head on so far. Back-to-backs are not easy and have not been kind to the Flyers. Neither has playing in Chicago.

They did it with players of all sorts stepping up. You saw guys like Ryan White and Gudas score goals. One night after Steve Mason helped carry the Flyers in goal, Neuvirth did the same. Defensively, the Flyers managed to survive the early flurry from the Blackhawks and turn in one of their best defensive efforts of the season.

What you are seeing is a team that has clearly banded together, chips away at the competition and picks their spots. This is a team that completely deserves to be where they are right now.

It is hardly over. The Flyers have the Pittsburgh Penguins on Saturday before having another week to continue to establish their place in the playoffs. But for one night, celebrate the accomplishments of this team, a team now in playoff position because of their resilience and their determination.