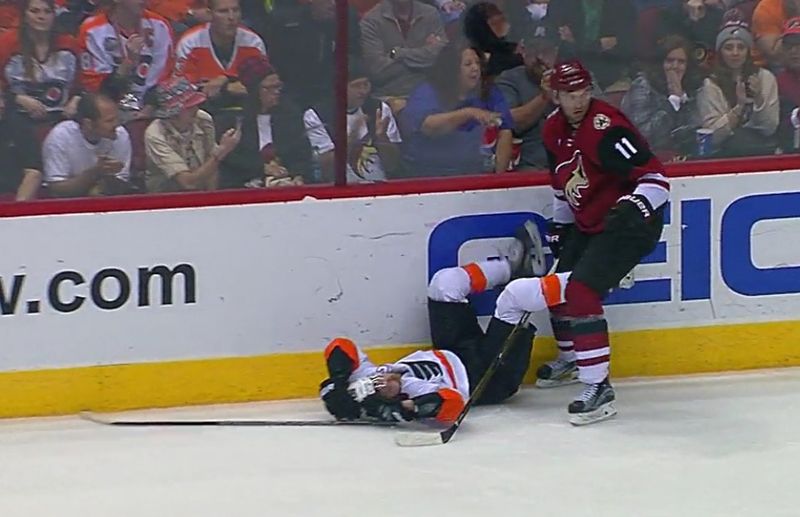 The singular standout moment in the Flyers 2-1 loss to the Arizona Coyotes is the second goal for Arizona. It came with 0.5 seconds remaining in the second period.

Steve Mason took contact in the crease, the result of a jousting match between Max Domi and Brandon Manning, and went to adjust his mask. As he did, Michael Stone fired the puck past the unsuspecting goaltender. It was the game-winning goal.

Forget the contact that may or may not have been deemed goalie interference. It was another example of the Flyers struggling to finish off a play in the closing seconds of a period. It has been a while since it has happened, but early in the season, the Flyers were burned several times by early and late goals in periods.

So the puck manages to get to a high-scoring area of the ice, regardless of the net-front scrum, and Arizona made the Flyers pay. That was the difference on the scoreboard.

Now come the long-term implications of the loss. The way it shakes out the standings, when the Flyers had a chance to really cement their place in the playoff picture and put pressure on teams with higher and better position. It is about Claude Giroux, who did not finish the game after taking a vicious-looking hit in the final minutes. It's about Wayne Simmonds and Ryan White and the tempers that flared in the final seconds surrounding the ill-will that suddenly formed in the third period.

It adds up to a wake-up call for the Flyers. Teams are gunning for them, contenders and bottom-feeders alike, and effort is only half of the battle.

Of the four games on the road trip, this was probably the Flyers best effort. They fired 35 shots on net, after managing just five in the first period, and had some decent scoring chances.

That said, let's not sugarcoat Mike Smith's performance. Was he on point? Absolutely. But the Flyers never really tested the netminder, who came into the game with a 3.70 GAA in his career against the Flyers.

Smith made some particularly good saves in the third when the Flyers started to get more creative and more dangerous, but through the whole period, it was that second goal that loomed large.

Now final three minutes of the game. The Flyers are trying to cut the lead to one when Giroux ends up on the ice and appears to be out cold. Martin Hanzal is the target. Three Flyers pile into a major scrum. One of them is Wayne Simmonds.

Simmonds really has struggled of late and the struggles not only continued on Saturday night, but are appearing to turn to frustration.

The play that really tells you everything you need to know about Simmonds struggles came early in the third. The Flyers, really needing a quick goal to get back into things, were about to head up ice on a 4-on-2. Simmonds failed to hold the blue line and forced the play offside.

Simmonds is also part of the top power-play unit that hasn't really managed to get any rhythm on the man advantage, let alone produce points.

When Giroux went down and appeared to be in distress, Simmonds was livid. We've seen this side of Wayne Simmonds before. It has put him in hot water.

Simmonds already has two instigation penalties this season. One more earns him an automatic suspension. Simmonds was not assessed an instigator penalty, but did receive a 10-minute misconduct. If there is anything more to come out of that, it would be a direct hit to the Flyers for a future game or so.

As for Giroux, he spoke to the media after the game and did undergo concussion protocol, but he still remains a concern moving forward.

Things got even crazier after Sean Couturier scored the Flyers lone goal, when White and Oliver Ekman-Larsson got into it and both were assessed misconducts that ended their night.

But the loss hurts so much more than just two points gone by the wayside in a game against a team out of the playoff race. Saturday was a day filled with playoff teams taking the ice. The Flyers were the final act.

With Boston, Pittsburgh and the New York Islanders all grabbing wins, the Flyers remained in a dead heat with Detroit for the final playoff spot. Nothing was necessarily lost, as the Flyers still have a game in hand on Detroit and the tiebreaker for the final spot, but it certainly changes the complexion of the road trip.

If the Flyers loss in Columbus was a disheartening one that was meant to teach a fairly young team a lesson, then this is further reason as to why finishing out the games where you gain an edge is so crucial.

The Flyers were the better team in possession, in chances, in shot attempts, but fell behind 2-0 and never recovered. Those games happen. And when they do, you have to hope that it doesn't come at a time when you really regret it.

The Flyers have to be feeling regret for Tuesday's game even further.

So in the short-term, nothing really changed. It was a missed opportunity, but with eight games to go and a lot of head-to-head competition happening, the Flyers will get another opportunity again.